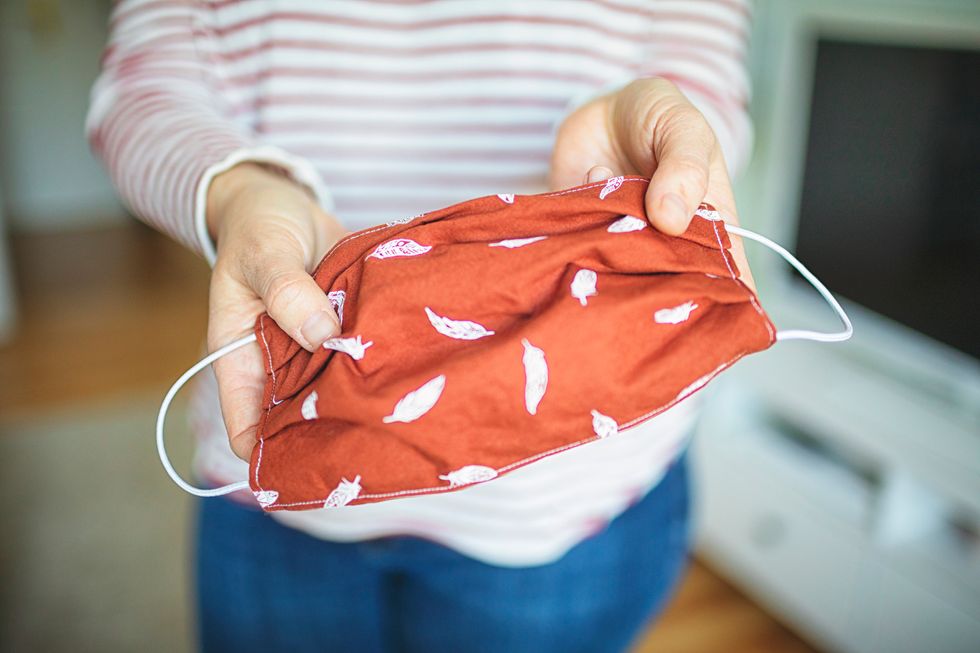 To Curb Coronavirus, What’s Behind the Wearing of a Mask?

To Curb Coronavirus, What's Behind the Wearing of a Mask?

The Centers for Disease Control and Prevention on Friday recommended wearing cloth face masks when going out, especially to places like grocery stores and pharmacies.

The Centers for Disease Control and Prevention on Friday recommended wearing cloth face masks when going out, especially to places like grocery stores and pharmacies.

That's because a "significant portion" of people with the virus lack symptoms or can transmit the disease through close contact before they show signs of illness, the CDC said. It is not recommending people try to purchase N95 or surgical masks, and the federal agency included online instructions on making masks out of materials at home.

The recommendation is optional. President Donald Trump, for instance, said he didn't envision wearing one. But in recent days, the number of people sporting some type of protective face gear appears to have soared.

Many experts agree that wearing a mask probably won't keep people from getting the coronavirus, but it might help prevent those with the disease — especially those without symptoms ― from spreading it.

The CDC's announcement — which came after days of deliberation among White House officials, the coronavirus task force and other public health figures about the need for such a guideline — brings with it caution.

First, masks could give people a false sense of security.

"We don't want people to feel like, 'Oh, I'm wearing a mask. I'm protected and I'm protecting others,'" said Dr. Deborah Birx, during a White House briefing last week before the CDC issued its recommendation. Birx, a member of the president's coronavirus task force, made clear that wearing a mask would not replace the need for frequent hand-washing and continued social distancing.

Another concern is that the recommendation could further strain the supply of medical-grade masks for health care workers, if consumers flooded the market to get their hands on one. Earlier statements from U.S. officials downplayed the use of face masks in public, in part for this reason.

But those messages ran counter to what other countries ― particularly in Asia — have recommended or required. Face masks have been ubiquitous in countries such as China, South Korea and Japan during the outbreak.

Before the CDC recommendation, residents in some hard-hit American cities, such as Los Angeles and New York, were encouraged to wear masks in public. Riverside County in Southern California mandated it.

Another issue: Homemade masks — and some store-bought ones ― don't fit as tightly as medical masks.

"Virus can sneak around the edges," said Melissa Perry, a professor of environmental and occupational health at George Washington University in Washington, D.C.

There's also the matter of the fabric.

"What I see are people buying masks on the web that are fashionable, but the fabric is thin," said John Lednicky, an aerovirologist at the University of Florida, who studies how viruses spread through the air. "If the weave is not tight enough, the virus will go right through them."

Still, he said, a homemade mask "is better than nothing" if it could block some particles expelled by an infected person. But he cautioned that a mask protects only the nose and mouth areas. Another route of transmission is through the eyes. So, again, don't touch your face or rub your eyes if possible.

"There's some protection from eyeglasses, but there's a lot of space around eyeglasses, so air currents can still hit your eyes," he said.

And one more caution: "When putting it on and taking it off, you have to be careful. You might end up getting virus all over your hands," said Marcus Plescia, chief medical officer with the Association of State and Territorial Health Officials. "Discard it carefully."

If it's made of fabric, wash it. If it's paper or some other material, put it in a sealed plastic bag and throw it away. Wash your hands after.

Transmission Out Of Thin Air?

Researchers are debating whether simply talking or breathing can send tiny virus particles airborne ― and whether those bits would be in great enough quantity to allow for transmission to another person.

This critical question has no clear answer.

No doubt a cough or sneeze can shoot out droplets several feet, but those are relatively large and heavy and quickly fall to the ground, researchers say. Still, that's a main route of transmission because the droplets can either land on a close contact — defined by the World Health Organization as within 1 meter ― or fall on surfaces, which other people then touch, possibly picking up the virus.

Staying 6 feet away from others and washing your hands a lot helps reduce the risk packed by droplets.

But what about smaller particles — those aerosols created simply by exhaling that can float in the air longer?

Evidence is not clear.

A special panel last week released a report reviewing studies from the U.S. and China, raising the possibility of airborne transmission. The studies' findings suggest that normal breathing can release aerosolized virus, according to the letter from a special pandemic committee at the National Academy of Sciences to the head of the White House's Office of Science and Technology Policy.

But, the committee added, "one must be cautious," because what the studies found may not represent "viable virus in sufficient amounts to produce infection."

The WHO, in a March 20 report, took a more cautious approach, saying there isn't enough information to say such tiny particles are airborne outside of medical settings.

Aerosols containing the virus can occur during some medical procedures, such as ventilating a patient, the WHO said, which puts health care workers at risk. Further study is needed, the report concluded, to see if the virus shows up in air samples in patient rooms where no such procedures took place and "whether viable virus is found and what role it may play in transmission."

Given the uncertainty, the bottom line, Lednicky and others said, is to avoid close contact and take other reasonable protective steps.

Masks are good to ensure that you are not transmitting the virus to others. But don't forget about that 6-foot zone of personal space.

How Does This Translate To Everyday Life?

Experts agree that in the midst of this pandemic ― while people are encouraged to stay at home and isolate — it's still important for physical and mental health to get exercise by walking or running. But what happens when you cross paths with another person, who may not be wearing a mask?

"More distance is better no matter what," said Dr. Georges Benjamin, executive director of the American Public Health Association, who said there is only a small likelihood that you are running through a mist that might contain the virus.

"If you want to hold your breath [while passing near others], fine, but it's probably not necessary," he said.

And then there's your neighbor's friendly dog. Researchers don't believe pets can transmit the disease. Still, to protect the pet, they suggest that those who are sick to avoid caring for or sharing their food with the animal, said Benjamin. Because keeping a proper distance from your neighbor is also key, it might be a good idea to skip the dog-petting.

Overall, most health officials appear to consider masks a good idea. But they agree on three constants in this quickly changing matter: Keep your distance from others outside your household. Wash your hands ― often. And don't touch your face.