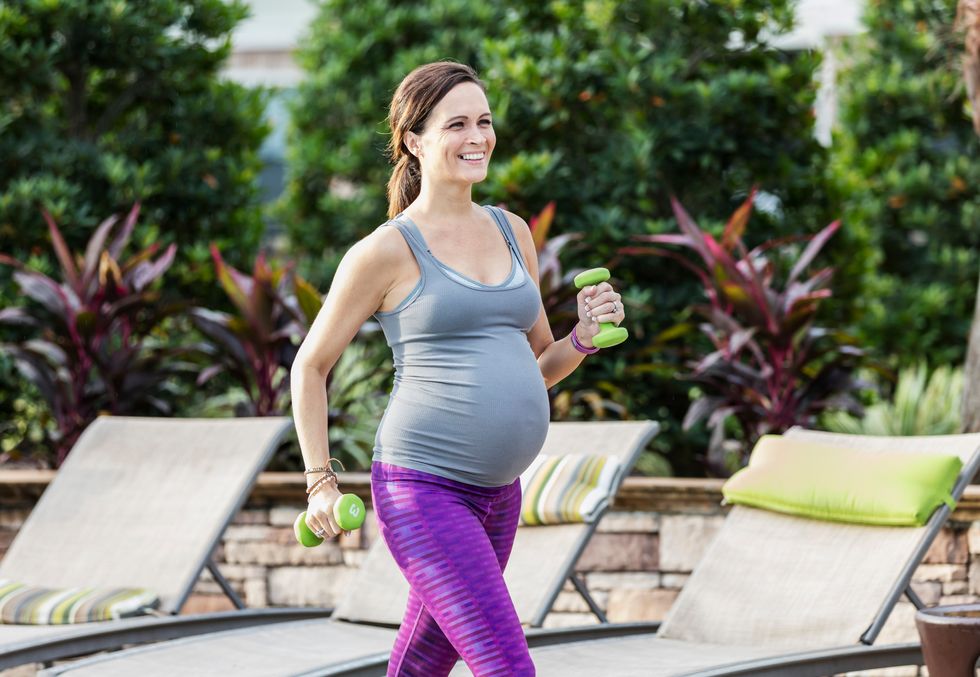 Regular aerobic exercise during pregnancy may improve baby's motor skills and may even lead to more active kids later on, a new study suggests.

(HealthDay News)—Women who keep moving during pregnancy may have infants with more advanced motor skills, a small study suggests.

Researchers discovered the difference among 1-month-olds: Those whose moms got regular aerobic exercise during pregnancy tended to have stronger movement skills, versus babies whose mothers did not.

What's the significance of those first motor skills? According to May, past research has suggested that infants who are quicker in developing motor skills are more likely to be "movers" as kids. So, it's possible that exercise during pregnancy might make for more active children.

May and her colleagues reported their findings in the August issue of the journal Medicine & Science in Sports & Exercise.

Long gone are the days when pregnant women were advised to stay off their feet. Experts now recommend that, unless there are medical reasons not to, women should get regular moderate-intensity exercise throughout pregnancy.

That, May said, means activity that's vigorous enough to get the heart rate up and blood flowing—but not so intense that you're breathless and can't have a conversation.

A brisk walk, swimming, a ride on a stationary bike or a low-impact aerobics class would all fit the bill.

Studies have found many benefits of exercise during pregnancy, such as healthier weight gain for mothers-to-be and lower risks of preterm delivery and macrosomia, where a newborn is abnormally large and may need to be delivered by C-section.

For the new study, May's team looked at whether the benefits extended to infants' movement abilities.

The researchers started by randomly assigning 71 healthy pregnant women to either have supervised aerobic exercise sessions or to be in a "control" group. Women in the exercise group worked out three days a week for about an hour; they could choose to use a treadmill, stationary bike or elliptical, or do aerobics.

Women in the control group were limited to light-intensity exercise and could attend supervised sessions on stretching and breathing exercises.

When their babies were 1 month old, a physical therapist assessed their motor skills. It turned out that infants of exercising moms did a bit better—though all babies scored within the range of typical development.

As for why moms' exercise habits might matter, the researchers pointed to some possibilities: Exercise might feed fetal brain development by boosting the flow of blood and oxygen to the womb. And it might aid overall growth and development through the release of proteins called growth factors.

In this study, though, much of the benefit of exercise appeared to be among female infants: Baby boys had somewhat higher scores than baby girls, on average, and there were few differences between boys whose moms exercised and those whose mothers did not.

The study cannot answer the question of why. But, May said, it hints that prenatal exercise might benefit girls more when it comes to motor skills.

A researcher not involved in the work offered some caveats.

First, it's unclear what these differences at 1 month of age will mean later in life, said James Pivarnik, director of the Center for Physical Activity and Health at Michigan State University.

It's also uncertain whether exercise is the sole reason for the group differences. There are other factors, like nutrition, that weren't accounted for, Pivarnik said. Women in the exercise group gained more weight, he noted—an average of 13 pounds more. That's a bit of a surprise that's unexplained, Pivarnik said.

Learn More: The Ideal Weight Makes for a Healthier Pregnancy

In addition, he said, there were no details on birth weight, an important factor in infant development.

Still, Pivarnik said it's important to have studies like this that delve into the effects of prenatal exercise on babies' development. And its results support what's already recommended, he noted.

"I think the message for pregnant women is, if you're exercising, keep it up," Pivarnik said. "And if you're not exercising, you should start."

Guidelines suggest women strive for 150 minutes of moderate exercise a week, May said. That can be spread across three to seven days.