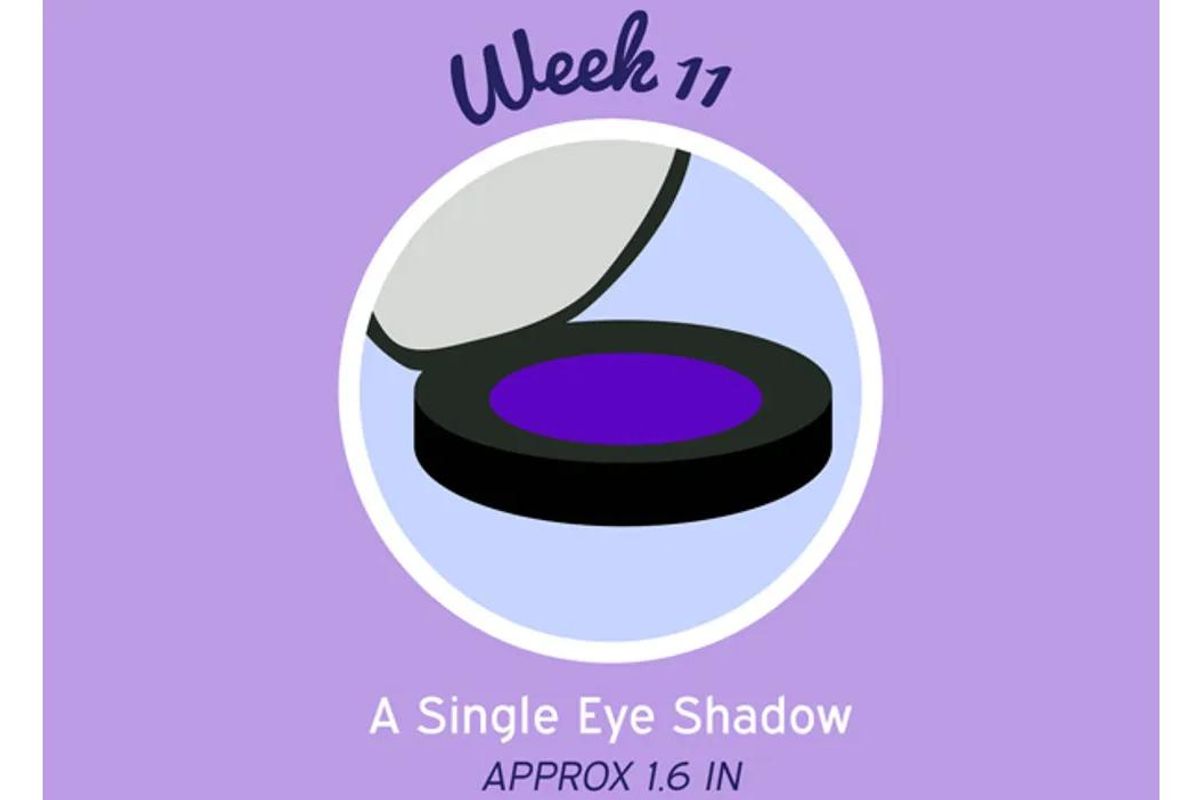 At week 11 of your pregnancy, your baby is about the size of a single eye shadow, or 1.6 inches long. He even has little hands that can open and close.

At week 11 of your pregnancy, your baby is about the size of a single eye shadow, or 1.6 inches long. He even has little hands that can open and close into fists now that the webbing between his fingers is gone.

Tip of the week:
Unsure of how your supervisors or coworkers will handle your pregnancy? Consider talking to one of your colleagues who has been pregnant. Try to do so outside of the office so that she can speak candidly. Ask questions like: How did your supervisor react when you discussed your pregnancy? Did you feel any resentment from coworkers? How long did you take off? Was that the right amount of time for you? How did you manage finances while you were off? What options did you explore for child care? Were you able to return to the same job? Did you breastfeed after returning to work? How'd that go?

Additionally, he's starting to form teeth buds beneath his gums, and his bones are getting nice and strong. He'll be exercising his new limbs a lot now, kicking, stretching and moving about, even though it will be another four to eight weeks before you can feel him.

His body is also preparing for life on the outside as his nasal passages and diaphragm are starting to take shape. If you could see up close, you might even catch a glimpse of tiny ears, a tongue and nipples.

Right about now, you're probably feeling a little bloated. But it's not because of your baby's mass, but rather it's likely due to the gas and constipation induced by pregnancy hormones.

However, the clock is ticking on when you'll form the telltale belly, so it may be time to start thinking about when to break the news at work, particularly if your job involves strenuous activity or exposure to hazardous materials, both of which can pose risks to your baby.

Another thing to consider is whether you're experiencing any difficulties with your pregnancy, such as severe nausea or vomiting, or if you're at risk of complications like preeclampsia, which is high blood pressure during the second half of pregnancy. If the rest of your term is likely to involve multiple trips to your health care provider, it may be best to share the news with your manager sooner rather than later so that he or she can give you the accommodations you need.

It's a good idea to review the federal Pregnancy Discrimination Act {link to site}, which outlines your legal rights in the workplace and prohibits your employer from firing or demoting you. You may also want to check out whether your state has any similar laws.

Finally, read your employee handbook or talk to your human resources department to find out more about your company's maternity leave policy and be prepared to answer questions about your plans for after the baby is born. Now is a good time to have a conversation with your partner about how much time you would like to take off from work, what you can afford and whether you'll continuing working the same hours going forward.

Read more:
What Is Gestational Diabetes and How Can I Prevent It?
Expert Tips on Eating Healthy During Pregnancy
Prenatal Tests: The What, Why, When and Where of 7 Common Prenatal Tests