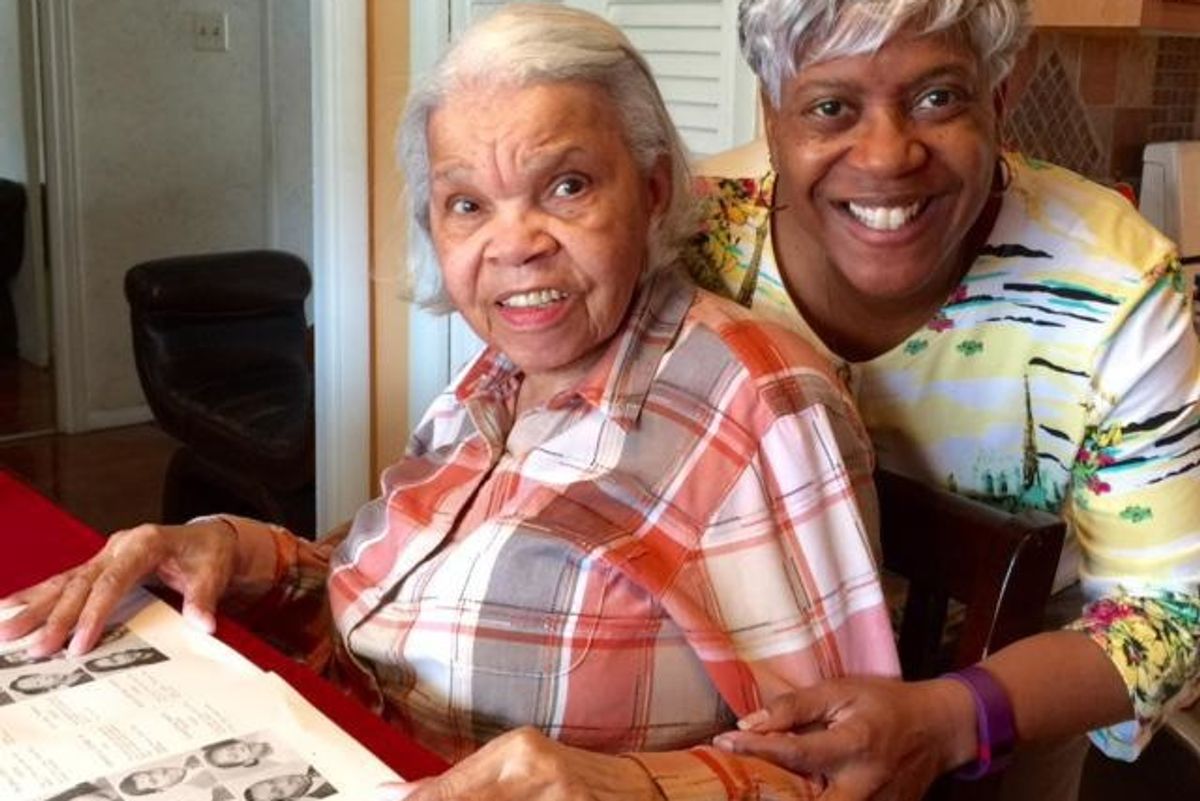 Loretta Woodward Veney and her mother, Doris Woodward, in 2016

Alzheimer’s Caregiving Is a Labor of Love

Caregivers deserve compassion and understanding, too.

For Doris Woodward, it started with small things: forgetting her keys and locking herself out of the apartment. Her daughter Loretta Woodward Veney noticed but wasn't alarmed. All the women in her family lived to a ripe old age, and her mother was only 77.

Then one day in 2006, Woodward missed her all-time favorite activity, tai-chi, which she attended twice a week down the hall from her apartment.

“I called her one Tuesday and she had forgotten to go, which was so unusual," Woodward Veney, 61, told me recently. “My mother wouldn't even go out to breakfast or lunch on tai-chi days because she was afraid there might be traffic and she'd miss her class."

At that point, Woodward Veney and her sister took their mother to a neurologist; six months later, she was diagnosed with Alzheimer's disease, which is one form of dementia.

“My great-grandmother lived to be 106, so it was terrifying for my mother to be diagnosed with this at 77," Woodward Veney said.

“When the doctor said dementia, mother looked right at me and said, 'That's bad, isn't it?'" Woodward Veney recalled. “I try to always be positive so I said, 'There are worse things,' and mother answered, 'What's worse than not being able to remember anything?'"

For a couple of years, Woodward continued to live on her own, but in 2009, Woodward Veney moved her mother to a group home because she could no longer find her way back to her apartment. At that point, Woodward Veney also took over the finances. The group home (just minutes away from Woodward Veney's house) monthly fee was more than three times Woodward's subsidized apartment rent, and her savings only lasted four years.

“If you have a loved one that gets Alzheimer's, look into every financial assistance program offered by your city, county and state immediately," advised Woodward Veney. She waited three years from her mother's diagnosis to apply, and by that time, there were 23,000 people on the list in front of her. Woodward was on the list for eight years before she got any assistance.

In the meantime, Woodward Veney found an inspired solution.

“One day, we were in a McDonald's and mother wanted an apple pie, and the cashier looked to me for permission. When I gave it, mother said, 'I used to be her mother and now she's mine,' and that's how I got the title of my book, "Being My Mom's Mom."

“I'm going to be honest with you," Woodward Veney told me. “I wrote the book to pay for my mother's care because I thought she would outlive my money."

Today, Woodward Veney is a national speaker on Alzheimer's care, and says she believes her mother would be proud.

“She raised me up to be helpful, and that's why I do these speaking engagements," Woodward Veney said, adding that she wants others to learn from her experiences.

An emotional toll on caregivers

Phyllis Greenberger, HealthyWomen's senior vice president of science & health policy has been caring for her husband since his diagnosis in 2011. Though he spent some time in a facility, Robert now lives in a room downstairs in their home. Greenberger has caregivers that she says are like family, but she is still the one who cooks his meals.

In 2018, Greenberger wrote movingly about becoming her husband's life raft as he descended into Alzheimer's.

Early on, Greenberger went to a few support groups, but said she found them unhelpful because everyone's loved one was in a different stage of the disease. Slowly, she met other women who were in similar situations caring for their husbands and formed her own support group.

During a recent emotional conversation, she told me her husband no longer recognizes her. “I make myself go down to his room, but it's really unbearable," Greenberger told me through tears. The couple have been married for over 50 years.

In between giving practical advice, such as taking over the finances as early as possible, Greenberger revealed that she still feels guilty about things she said in moments of desperation.

“You get short-tempered, stressed out and angry. It's really hard to say the same thing 10 or 15 times and not raise your voice the last time," Greenberger said. “They tell you it's the disease, it's not him, but it's very difficult."

Jill Lesser, president of WomenAgainstAlzheimer's, told me that it's common for people caring for someone with Alzheimer's to feel anger and frustration, especially in the beginning when the diagnosis may not be clear. Lesser's own mother was diagnosed with Alzheimer's 12 years ago. She explained that the diagnosis journey can be long and confounding for everyone involved, and it's important to honor the needs of the person with Alzheimer's (or other form of dementia).

“Being compassionate about how horribly frightening it is for the patient, while you're trying to jump in and keep them safe, is really important," said Lesser. “Alzheimer's patients, or even those who haven't been diagnosed, need to feel in control to make their own decisions — consistent with safety."

Lesser said caregivers also need to have self-compassion and recognize that everyone gets frustrated when having to say the same thing 10 times.

“Don't beat yourself up. When we talk about caregiving, people should give themselves a break and honor themselves," Lesser said.

See below for the latest facts and figures about Alzheimer's from the Alzheimer's Association.