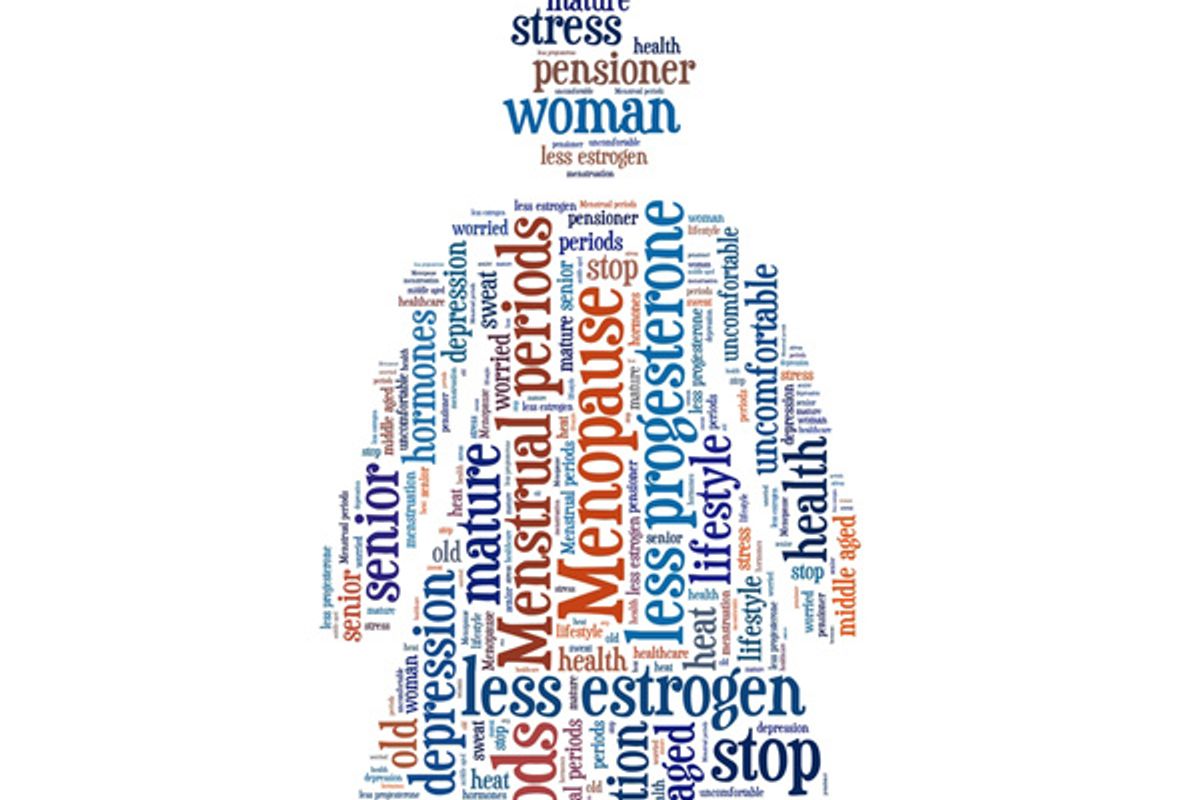 Menopause and Your Moods

Why do some women going through menopause feel like they're out of control, irritable, short-fused and just plain crazy? And why do others pass through seamlessly with nary a hot flash or mood swing?

Why do some women going through menopause feel like they're out of control, irritable, short-fused and just plain crazy? And why do others pass through seamlessly with nary a hot flash or mood swing?

Back in 2005, when blogging was still fairly new, I created this Midlife Matters blog for HealthyWomen. As a health writer, I was excited about sharing accurate and timely health information in an intimate setting, which fostered a dialog with other like-minded midlife women, something that's not possible via standard print magazines and websites.

To date, my most popular post was about Menopause and Anxiety, published in August 2011. Almost four years later, the post still brings in comments—quite unusual in the blogosphere. The comments—all 133 of them (and climbing!)—have taken on a life of their own, spawning conversations between my readers, who clearly find comfort in knowing they're not alone.

Nancy, now 56, recounts a bit of her experience:
"When I was 48, I experienced what I thought was another anxiety attack—but I now realize was my first hot flash. I got really hot and shaky; my stomach was churning. I felt like the bottom had dropped out, which is the same way I feel when I get anxious.

"Once I started getting regular hot flashes I realized that anxiety frequently went along with them. I'd feel anxious about the hot flashes themselves: what would trigger them; would they embarrass me; how long would they last; would they wake me up in the middle of the night?"

"This past January, while on a flight to Iceland, I had a bad hot flash/anxiety attack that seemingly came out of nowhere. Suddenly I got really hot, sick to my stomach and shaky. It almost felt like my nerves are on the outside of my body. I wanted to get up but I knew if I did, I'd faint. I had anxiety about the anxiety—feeling so bad physically and mentally, afraid I was going to faint and be embarrassed, afraid there was something really wrong with me. So I turned on the overhead fan as high as it would go and put my head down between my legs as far as I could in the cramped seat and waited it out. It took a good 20 minutes and I felt horrible, but I kept telling myself that it would pass … and it did and I was fine."

Now it's time to revisit the topic of menopause and anxiety. I've interviewed two women who have dedicated their careers to the study of one of life's biggest transitions: Margery Gass, MD, the executive director of The North American Menopause Society, and Sheryl Kingsberg, PhD, chief of behavioral medicine at University Hospital's Case Medical Center and professor of reproductive biology and psychiatry at Case Western Reserve University School of Medicine.

Q. Are some women affected by anxiety and depression during menopause more than others?

A. Dr. Gass: Although there's not a direct correlation between menopause and anxiety, women who are more prone to anxiety disorders—or have a prior history of them—are more prone to experiencing them around the menopause transition. It's not uncommon for some women to feel like they're experiencing PMS all over again—there's that intense feeling of worry, rumination and anxiety. One interesting report from the SWAN study (Study of Women's Health Across the Nation) found that women with high anxiety before menopause continued to have high anxiety during the menopause transition and that some of the women with low anxiety premenopause experienced higher anxiety during the transition.

Dr. Kingsberg: There are also women who are more sensitive to the shifts of reproductive hormones; women who might have experienced PMDD (premenstrual dysphoric disorder) or postpartum depression. They're the ones who might feel their mood affected during menopause, too.

Dr. Gass: Yes, some reports say women who are pregnant may also be more prone to panic attacks and anxiety—it stems from a change of hormones from what their baseline was.

How long does this go on? Should we wait it out?

Dr. Gass: I wouldn't want a woman to wait if she is bothered by her symptoms; she should get relief from them. It's a woman's choice. The good news is that once menopause passes, there will be a new plateau of steady hormones. A lot of women will find their level of anxiety decreases markedly.

Editor's Note: While that's good news, the not-so-good news is that a new study published in JAMA Internal Medicine in February reported that women may experience symptoms of menopause, including hot flashes and night sweats, for a long time—up to 14 years!

What about hot flashes? Many women feel especially anxious while they're experiencing them.

Dr. Gass: We do believe that hot flashes stem from what's going on in the brain and the thermoregulatory center. And that center is being communicated via neurotransmitters, which also relates to mood states.

Dr. Kingsberg: If your menopausal symptoms—like hot flashes—impact your sleep, that can be a problem. When sleep is negatively impacted, some women will be more sensitive to the disruption of these neurotransmitters and thus be at greater risk for anxiety symptoms.

Can you offer some suggestions that might help with the anxiety and mood disorders women experience around menopause?

Dr. Gass: Hormone therapy (HT) may help with anxiety, but it should only be taken if a woman is experiencing hot flashes too. There are also antidepressants that can help, and if anxiety and mood disorders are the primary symptoms, I'd suggest going with those first. Finally, there is an antidepressant that has recently been approved for hot flashes (but not anxiety) called Brisdelle.

Dr. Kingsberg: HT can help with hot flashes, but we don't use it to treat mood disorders, as there's no data to suggest it would be effective. But I agree that it can be helpful for women who have significant hot flashes along with symptoms of anxiety. To treat a mood disorder, some women do fine with psychotherapy alone; others need antidepressant medication, like Prozac or Effexor, and some do best with a combined treatment of psychotherapy and medication. Hot flashes may trigger anxiety in some women (you start to worry about when they're coming and how they'll make you feel). However we don't treat anxiety and expect that hot flashes will resolve because anxiety resolves. When antidepressants are used for hot flashes, it is because there are data showing that they reduce hot flashes. In fact, Brisdelle, a low-dose form of the antidepressant Paxil, has a specific indication for the treatment of hot flashes.

How do you feel about alternative or nondrug therapies?

Dr. Gass: There's no problem in trying them if they're not harmful, but if you don't derive help by six weeks or so, abandon them and go on to something else.

Dr. Kingsberg: I definitely recommend alternative and adjunct therapies such as acupuncture and mind-body approaches; they can only help, and I can't even figure out how they'd hurt. Remember, it's not a one-size-fits-all solution: find the best approach for you. What worked for your friend or sister won't necessarily work for you.

The National Center for Alternative and Complementary Health, part of the National Institutes of Health, has valuable information on alternative ways to deal with and ease menopause symptoms. Among them are mind and body practices, like yoga, tai chi, qi gong and acupuncture.

As for herbal supplements, they state that researchers are currently studying them to identify their different compounds and active ingredients, to gain a better understanding of their effects in your body. They caution that some of these supplements may have serious side effects. (Some women turn to things like gingko, kava, lemon balm, lavender, melatonin, passionflower, German chamomile and St. John's wort.)

And what of bioidentical hormone replacement therapy (BHRT)? Their stand on it is that it's a marketing term that describes medications made in specialized pharmacies, and that they may contain "any variations of hormones, including estrone, estradiol, progesterone and testosterone." Be aware that these are not approved by the U.S. Food and Drug Administration.

To ensure coordinated and safe care, make sure to inform your health care providers about any complementary health approaches you use.

Read more on menopause symptoms:
8 Ways to Deal With Hot Flashes in the Heat (Or Is-It-Hot-In-Here-or-Is-It-Just-Summer?)
Is Menopause Playing Havoc With Your Sleep?
Managing Menopausal Symptoms