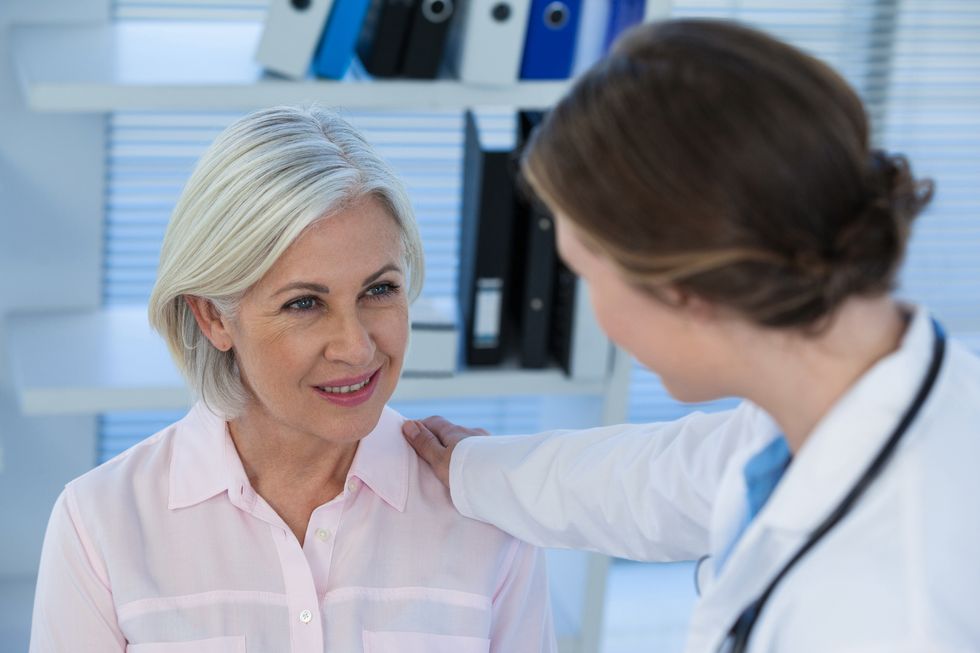 HPV and Menopause: Are We Ever Out of the Woods?

HPV, or human papillomavirus, is not just a concern for young people. The virus, which causes most cases of cervical cancer, can also occur in women around menopause.

When you hear "HPV"—short for human papillomavirus—do you think that only pertains to younger women?

Many people do. But that's not necessarily the case.

But isn't the vaccine recommended for younger people?

Yes, it is. To protect both boys and girls from developing certain types of cancers (such as cervical and penile) later on, the HPV vaccination is recommended at age 11 or 12. And if people haven't been vaccinated during that time, it's recommended for everyone up to age 26.

The vaccine is administered in two doses: the first between the ages of 11 and 12 and the second six to 12 months after the first. For people over 15, it's given in three, rather than two, doses over six months.

Isn't this kind of young?

You might think that, and, in fact, that is why the vaccine can be controversial. But it's meant to fully protect children before they're exposed to the virus. That's why it's recommended at an age before children become sexually active.

OK, so you get the vaccine—what exactly is it protecting you against?

The HPV vaccine is effective in protecting people from certain types of HPV that can lead to genital warts or pre-cancers and cancers of the cervix (the majority of these are caused by the HPV virus); anus, vulva/vagina, penis or throat.

Why isn't it recommended after age 26?

The vaccine is believed to be less beneficial because many people have already been exposed to HPV by then. But the good news is that in 2018, the approved age for the HPV vaccine was raised to 45, so if you want to get it, you can. You may still have risks for new HPV infections and may still reap possible benefits of the vaccine. Talk to your health care professional to reach the best decision for you. It's important to note that getting the vaccine later in life won't cure HPV if you already have it.

I'm still confused. The HPV vaccine wasn't available when I was younger, and I'm over 45 now. Does that mean I can still get HPV, even though I'm not in the typical age range of diagnosis?

It helps to understand some facts about the HPV virus. First, it's an extremely prevalent virus. Almost 85 percent of adults between 18 and 65 will have at least one strain of HPV in their lives, and as many as 50 percent of Americans currently have it.

Most people's immune systems will fight and clear the virus and make it undetectable, but a persistent infection will remain in about 10 percent of people. Those are the people at risk for developing genital warts, pre-cancer or cancer linked to the virus.

It's important to remember that being diagnosed with HPV after menopause doesn't necessarily mean you contracted it after menopause, because the virus can lay dormant for years or even decades and then become active later in life.

But, older women can contract HPV. Although the incidence is smaller than in younger women, one study cited a few possible reasons: Many older women are sexually active, and if they have new sexual relationships later in life, they may be exposed to HPV strains for the first time.

Another risk factor is smoking. In addition, more women are aging with their uterus intact, says the study, which renders them vulnerable to cervical HPV.

Why is HPV being found in women at or after menopause?

After menopause, women may be surprised when they're diagnosed with an HPV-related cancer.

It's impossible to know which people with HPV will go on to develop cancer or other health problems, and the virus can remain dormant for decades. (It's like the shingles virus, which can occur from the chickenpox virus you had. It can reappear as shingles after lying dormant for decades.) There is a risk, say researchers, that the virus can be reactivated around age 50. Indeed, a study has found that HPV in women aged 35 to 60 is a result of an infection acquired years before. Generally, it happens to people whose immune systems are weak (including those with HIV/AIDS or who have undergone certain cancer treatments). They may be less likely to fight off HPV.

Since the risk of HPV is directly related to the number of sexual partners you've had, if you grew up during the sexual revolution and were part of it, you might be at a significantly higher risk than someone with few sexual partners.

Previous studies found that HPV peaked in young women and declined in their late 20s and 30s, but that's no longer the case. That's one reason the North American Menopause Society says this: "Baby boomer women, and all women who have had multiple partners, should not stray too far from their Pap smear or HPV test at menopause until we know more about the increased risk of HPV flare up at menopause."