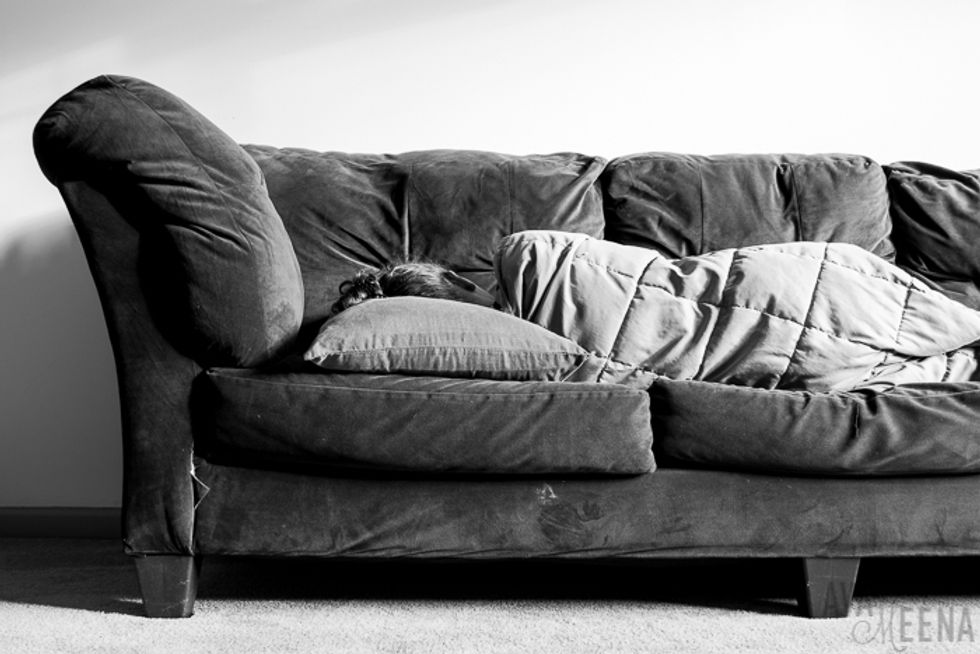 What It's Like in the Depths of Sickness with Lupus

What It's Like in the Depths of Sickness with Lupus

Ava Meena is a #teamHealthyWomen Contributor and this post is part of HealthyWomen's Real Women, Real Stories series.

I had been feeling sick for nearly two years before I received a new name for my sickness last January: lupus. But around the same time of my diagnosis, I began a descent into a deeper level of sickness than I had ever known before. It was a gradual descent at first, but eventually I was plummeting out of control until I became practically bedridden in April.

In the depths of my sickness, all I could see was pain stretching out endlessly into the distance. My husband would find me weeping and I would tell him, "I can't do this anymore." I wasn't suicidal—but I wasn't that far from it, either.

In the depths of my sickness, I had no stamina. My disease was so overactive that it completely depleted my energy reserves. I got tired from showering. Going to a doctor's appointment would wipe me out for days. I did not do anything that wasn't absolutely necessary, and sometimes, I even skipped those things.

In the depths of my sickness, my body was riddled with infections. My immune system was busy attacking my healthy parts instead of fighting against a real threat. I suffered a particularly traumatizing ear infection in February, which ruptured my eardrum and caused me so much pain that our neighbors actually called the cops (fearing domestic abuse).

In the depths of my sickness, I took the maximum allowable dose of opioids that my doctor had prescribed (and had to ignore the demonizing articles that my healthy friends were sharing online about opioid use).

In the depths of my sickness, I could rarely use my hands. They were swollen, painful, practically useless extremities. A simple attempt to reposition my pillow would cause me to grimace in pain. I could not open jars, water bottles, pill containers, etc. Anything that required pressure on my fingers was beyond my ability.

In the depths of my sickness, my blood pressure rose to a concerning level from all the stress of being in so much pain. I could not control my anxiety levels and the thought of leaving our apartment—even for a quick bite to eat—could make me collapse in tears. It was unbelievably challenging to put on clothes, sit up straight, and endure the presence of people who had no idea how sick I was.

In the depths of my sickness, I counted down the hours until I could go to bed—not because sleep was blissful, but because I couldn't face the day anymore. Even fitful sleep, propelled along by muscle relaxants, was better than the reality of my days.

In the depths of my sickness, I felt so alone and abandoned by almost everyone. The only person who was truly there for me was my husband. My suffering seemed like it would never end, and most of the people that I expected to support me in the lowest lows of my life were nowhere to be seen. I was desperately in need of help and I would have given almost anything to have a friend simply sit and be with me in the depths of my sickness.

In the depths of my sickness, my husband was completely overwhelmed, too. Since I couldn't cook, clean, or really do anything useful, he had to take care of every single thing. The strain of working full-time and providing for all my physical needs became far too much for him frequently. It would have been far too much for anyone. Unfortunately, not many people were there to shoulder his burden with him in his time of need.

In the depths of my sickness, I lost myself. My personality became obscured by pain.

In the depths of my sickness, I felt inescapably betrayed by my own body. My body – the thing that makes me, me – was attacking itself; I could not walk away from it like I could leave a demeaning job, an unfaithful lover, or a cruel friendship.

In the depths of my sickness, I was not at fault. I did not cause my lupus. I did not wreck my body. I could not have prevented my sickness.

Although I had little control over the progression of my lupus (in fact, I was rather unaware of my disease for the first year and a half of my sickness), I still had a lot to learn about putting my health first. After a month of gentle therapy and self-care my pain retreated to an almost manageable level.

With medication, physical therapy and continuing to put my health first, I have now achieved what I call my 'lupus normal'. I am living a somewhat normal life with lupus—something that I didn't think was possible when I was in the depths of my sickness. I'm a bit surprised to be here on the other side. It's almost like someone has turned bright lights on in a dark room. But I still get tired pretty easily. I still need my pain medication for anything more than a quick trip to the store. My knees usually hurt in the evening and I have to be very careful about infections.

I have survived something terrible and I never want to return. I would do almost anything to avoid entering those depths of sickness again.

If you are in the depths of your own sickness, I would encourage you not to give up. Keep seeking answers. Keep getting out of bed even when it seems like it's the hardest thing you've ever done. If your doctor isn't helping you, then find a new one. I saw a rheumatologist and a pain specialist who both essentially told me my pain was caused by anxiety and my weight before I found the doctor who diagnosed me with lupus and actually helped me. It always amazes me when I read stories where people say things like, "the doctors couldn't help me so I went home and suffered for the next six years." Don't let that be you; you shouldn't have to suffer. Be relentless in your search for care. If one doctor says it's all in your head, or that you just need to try harder, then go home and find another one (after you nap, of course).

For I time I did not believe I would emerge from the depths of my sickness. Yet, I have. On my way out I learned a valuable lesson about putting my health first. I'm grateful for that, and I hope it will help me to create a bright future for myself, lupus and all.

A version of this article originally appeared on My Meena Life.

Living With Multiple Sclerosis Means Always Being My Own Advocate