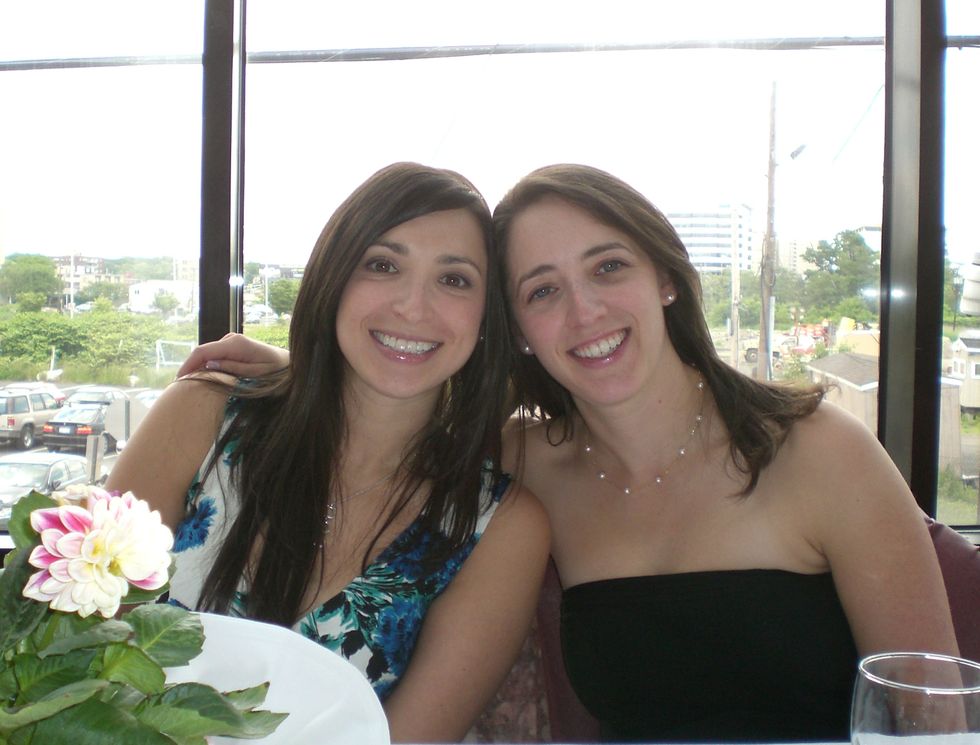 Sisters Jenny Wikoff, 39, and Julie Buchanan, 37, have done everything together since their childhood in New Jersey. But three years ago, their paths diverged when Jenny tested positive for the BRCA2 gene mutation.

Sisters Jenny Wikoff, 39, and Julie Buchanan, 37, have done everything together since their childhood in New Jersey: They went to camp together, attended the same college, got married in the same year, and had kids around the same time (Jenny's two boys are 6 and 3 years old, and Julie's son and daughter are 5 and 4). But three years ago, their paths diverged when Jenny tested positive for the BRCA2 gene mutation, which indicates a significantly higher likelihood that she could develop breast or ovarian cancer over the course of her lifetime than an average woman. That is, a woman like Julie, who doesn't have the gene mutation.

They've had to realign their relationship, with Julie supporting and helping care for her big sister Jenny—who calls herself a previvor-in-progress—through three preventive surgeries since last year: a salpingectomy, which removed her fallopian tubes, a double mastectomy, and a breast reconstruction. She has another surgery planned for later this year to improve the reconstruction.

We talked to Jenny and Julie about dealing with the fear of cancer as a healthy person, and about supporting a loved one through treatment before sickness happens. (The conversation has been edited and condensed.)

HealthyWomen: Why did you get tested?

Jenny: Our Aunt Laura had been strongly encouraging me for years. On my father's side, my grandmother is—96? 97?

HealthyWomen: Julie, did Aunt Laura nudge you about the test too?

Julie: Yes, she definitely did. I didn't worry about it before Jenny's results, because technically our family history doesn't make us high risk—or so we thought.

Jenny: That's a really good point, because it's not a usual case with the BRCA mutations, but in our family people got breast or ovarian cancer, as I said, in their 60s or older. But for a lot of people who have BRCA1 or BRCA2 gene mutations, people in their families get cancer in their 20s or 30s, and it's heartbreaking. I've heard so many stories now—they say in my support group, oh, my sister died in her 30s, my aunt found out that she had breast cancer when she was pregnant when she was 28, all these crazy stories. And we didn't have those.

Once I found out that I was positive, the whole family turned around and looked at Julie. Like okay, it's time, let's see what your results are. We all waited on—to say the least—pins and needles.

Julie: I was lucky enough to be tested negative. I do not have the gene.

HealthyWomen: How did Jenny's results affect your relationship?

Jenny: Right after the genetics counselor called me, I called Julie. I was in shock, I was heartbroken, and of course she was the first person I would call after we had talked so much about it.

We had a really intense time going through the years of my doctor appointments, trying to figure what I was going to do, getting my scans. Because we are such good friends, she had to figure out what support I needed, and I had to figure out what I needed to ask for. We had a couple of weird periods where it was a challenge to know how to relate with this new horrible thing that we were dealing with. But thank goodness she wasn't dealing with it too.

Jenny: We went to college together.

Julie: We went to camp together.

Jenny: We worked together.

Julie: This was the first real divergence for us.

HealthyWomen: Julie, you're the senior web producer for HealthyWomen—how does this experience affect your work?

Julie: It makes me understand how important the work we're doing is, especially with the Keep the Care campaign [which advocates for maintaining mandatory insurance coverage of preventive medical services and screenings]. To have people know that these preventive measures are covered right now, and while they're being covered, people should go get tested.

HealthyWomen: Jenny, after meeting with genetics counselors, your personal doctors, and specialists to discuss all your options, you decided to have the preventive surgeries?

Jenny: The route I ended up choosing was to get my fallopian tubes out first, then a double mastectomy. My ovaries I'll get out a little later because there are risks associated with that.

HealthyWomen: You've had a lot of surgery over the last year-plus—how much time do you think you've lost to these procedures and recovery?

Jenny: It was three weeks maybe with the salpingectomy, eight weeks with the mastectomy. But then at the time of the mastectomy they placed expanders under my pectoral muscles to make space for implants, so for months in between my mastectomy in April and my reconstruction in late July I went every week to the plastic surgeon's office where they would inject saline into the expanders to stretch my muscle. It was terrible. Then you have the exchange surgery—they take out the expanders, which are hard, and they put in implants.

Leading up to the exchange surgery, I also went to physical therapy because the effects of the mastectomy were horrible and painful and confusing and surprising. All these physical things that I didn't plan for and I hadn't read about. I have numb areas on my back, and my armpits were on fire for the first couple of weeks. You don't think about it, but swinging your arms when you walk is so natural—it was one of the hardest things I've ever experienced.

Jenny: Right after the mastectomy when I went for my first week checkup, the plastic surgeon and his nurse practitioner took off the bandages, and they said, "ohhh," because I had these huge dark patches pretty much from my nipples all the way down. I was healthy, but my breast surgeon gave that tissue a 50 percent chance of survival. It was a nightmare.

To help the tissue heal, I got approved for hyperbaric chamber treatments—they change the air pressure around you in a locked chamber over the course of two hours, and you're exposed to 100 percent oxygen. It helps the red blood cells, I don't know, be happy, regenerate, something like that. I went every day for two hours for 12 or 14 treatments.

Oh my god, I can't believe my year.

Julie: I think the hardest part was the hiccups, like where she had to go through the hyperbaric chamber. When she started recovery, it was like, okay, here are the steps you need to take, and this is what's going to happen, and after you take these steps you'll be okay. Then, when you take those steps and you're not okay, that was the biggest surprise.

Jenny: For all the crap that I went through this year, I am so damn lucky. All of my lab results came back clean from the mastectomy. It was hard, but so much less hard than so many other people in this community.

HealthyWomen: Why do you think the side effects and problems came as such a surprise to you? Did you think it would be easier for you because you hadn't actually been affected by cancer?

Jenny: Well, I was a healthy patient, that's the thing. I was super-healthy, in the best shape of my life. I am young, I have no issues medically, I have great doctors. No, I didn't expect any complications. When you put all the pieces in place for a successful outcome, you don't expect not to have one. Especially since I'm a control freak, which I've learned to let go of in the past year for sure.

Thank you, Universe, for that lesson!

HealthyWomen: How have you approached this process as sisters?

Jenny: Julie was amazing, she came to my house unasked after my surgeries to be a mommy to my kids while I couldn't.

I will say, too, that there's something about a sense of normalcy that's a huge blessing when you're going through this. The great thing about having a sister is that I can say to Julie, okay, just tell me about something mundane. Tell me what's going on with your kids, what are you doing today, let's plan a visit and go apple-picking. Let's go see our grandma.

Julie: That's right—didn't we watch some TV that first night that I came up?

Jenny: Ooh, that's right, thank you for watching with me, that's my favorite show.

Julie: Yeah, that's just our normal, usual, what we would do.

Covid-19 Vaccines and False-Positive Mammograms: When Should You Get Screened?