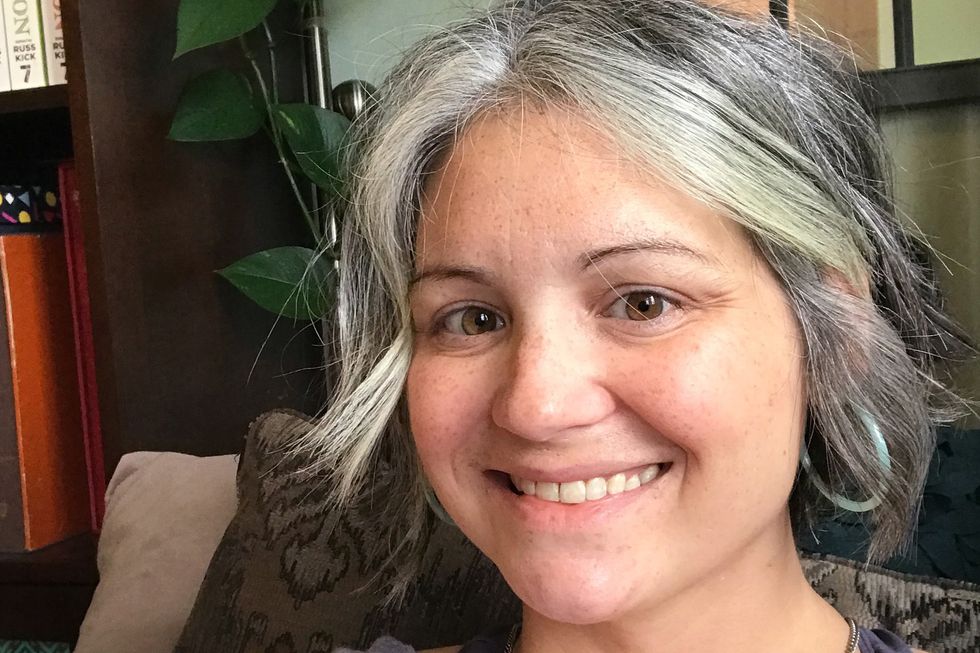 I Was Told My Irregular Vaginal Bleeding Was Normal, But I Actually Had Cervical Cancer

Mary wants you to read her story and remember to listen to your body and make sure you're being listened to when concerns arise.

I was diagnosed with human papillomavirus, better known as HPV, when I was 17 years old. I had no idea what it was, let alone how it would affect my life down the road. I was told it would increase my risk of getting cervical cancer, but I wasn't too fazed at that stage of my life to let that concern me. As the years went by, I had abnormal Paps which were followed by colposcopies. It became a pretty regular part of my experience with gynecologists, but I was always reassured by the colposcopy results coming back normal.

After my daughter was born in 2008, my family and I moved to a new town and I never established a physician for myself. As the years went by, I started having alarming symptoms such as bleeding after sex and irregular periods. These symptoms prompted me to seek help. The gynecologist I saw told me it was likely a hormonal imbalance and that even a lot of bleeding, while alarming to me, is usually nothing to worry about. He also rather inappropriately felt that what I should really be concerned about was having more babies while I was still young. After this useless experience, another year went by and the abnormal bleeding continued, until one day it didn't stop. It kept getting worse and I was passing large clots. This went on for days and after more unacceptable answers from the ER and a telemedicine doctor, I finally found a gynecologist that took my symptoms seriously. He sent me to a GYN Oncologist who diagnosed me with stage 3B cervical cancer.

My 34th birthday was spent on an operating table, having cancerous and necrotic lymph nodes removed. After recovering from surgery, I started a rigorous 9-week treatment regimen of weekly chemotherapy and daily external radiation. This was followed by 5 sessions of internal radiation, called brachytherapy, where a rod is inserted into the vagina to deliver a high dose of radiation directly to the cervix. This treatment was particularly brutal, especially as a survivor of sexual assault.

After the first round of brachytherapy, I didn't think I was going to be able to go back for another one. I felt isolated in my thoughts and the reality that I might not survive this. I was so sick and frail that it felt like a very real possibility that my kids would lose their mother. I ordered them books on grief and wrote down their favorite recipes. To say I was in a bad headspace is an understatement.

Still, I continued going to my daily external radiation treatments and weekly chemo. There was no other choice. There were a couple of times where I was wheeled straight from a surgical procedure still high on anesthesia, to receive my radiation treatment. The whole time, I was so sick and weak. Every day, I would tell myself, "You can do hard things," even though truth be told I didn't believe it half of the time. I was so scared.

Finally, the day came when treatment was over and the scans came back as NED, or No Evidence of Disease. It wasn't until that moment that I felt myself breathe for what felt like the first time in months. I was so overwhelmed at what I had just survived that all I could do for two weeks was cry, acknowledging what I had endured and allowing myself to think that I may have a future after all. To this day, three years later, I still carry that gratitude as I continue to hear the words No Evidence of Disease.

As much as I wish I could say my cancer story ends there, it was the beginning of my survivorship and what some call the "new normal," which isn't normal at all. The side effects from treatment often feel like a full-time job to manage. I lost my fertility and went straight into menopause shortly after treatment ended. Radiated scar tissue continues to form that will cause my vagina to close shut if I don't use a dilator regularly to keep it stretched. I have lymphedema in my feet and legs and use a pump that goes from the waist down every night for an hour to keep the swelling at bay. I spent a year in physical therapy to try to fix the chronic tailbone pain I have from treatment, to no avail. I have GI issues that limit what I can eat. I have brain fog and often forget simple words. I have horrible anxiety. The list goes on. Cervical cancer wasn't easy and it turns out survivorship isn't for the faint of heart either.

After my ordeal, I found Cervivor, a non-profit organization dedicated to cervical cancer advocacy and have since told my story in numerous platforms, all the way up to the United States House and Senate. Cervivor not only prepared me to be an advocate, but also provided me with support from other women like myself who understand what going through advanced cervical cancer is like. I am proud to be a part of such a powerful group of women.

My message to women is not only to listen to your body, but to make sure that you are being listened to when concerns arise. You will know if something is not right inside of you. If you are not being taken seriously, keep looking until you find someone who will. And please, vaccinate yourself and your children (girls AND boys) against HPV so that we can end experiences such as mine altogether in the future.