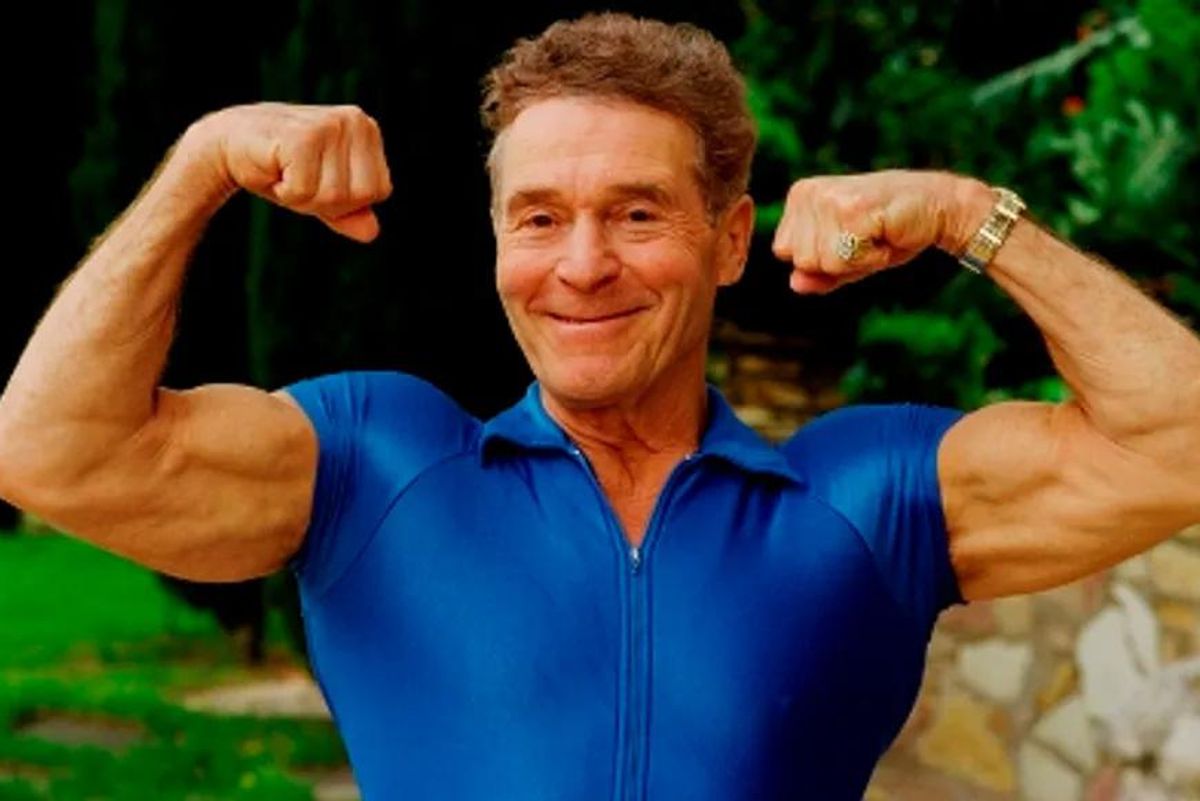 Six things I learned from talking to him

It was 2005. I was new to this client, a national health newsletter. And I was a bit apprehensive about proving myself and tackling the assignment.

I was nervous. After all, Jack LaLanne was an absolute icon who practically invented exercise. I thought back to when I was a kid, remembering our modest black and white television set that sat perched precariously atop a small wooden table in the living room. There my mother stood, rapt, absorbing his words while mimicking his movements. It's hard to forget moments like that, especially since this man's bulging but compact muscles and that trademark shiny dark jumpsuit always captured my attention and awe. Yet I never fully absorbed what he was “about" other than jumping jacks and touching his toes.

When I called Jack on the phone at our arranged time, his wife Elaine answered on the first ring. “Oh hello!" she said excitedly, “I'll put Jack on!"

And then, the interview began. My carefully-prepared questions went mostly unread, as Jack breathlessly revealed the trajectory of his career, interspersed with jokes and personal anecdotes. I wrote furiously, trying to capture the essence of his words.

A few days ago when I read that he had died, I thought back to that interview. I realize now, even more than then, just how much this man knew and how much he contributed to healthy habits and positive thinking. He truly was a legend and a man before his time.

Here are some helpful reminders of why LaLanne enjoyed a long, healthy life:

You can exercise without going to the gym.

In other words, there's no excuse! Walk up and down the stairs, run or walk in place while watching TV, or get up regularly from your desk chair to stretch and move around. One easy exercise he liked: Get up from your chair, then sit back down 10 times quickly; then slow it down and do it five more times. This targets your thighs and abdominals, as well as your heartrate.

Today, we all know this is true: Sitting is bad for your health.

Here are some quick 2-minute exercises to do at home.

Mix up your workout. Stick to the same routine and you'll quickly become bored or worse, abandon exercise altogether. Challenge your muscles and your stamina by changing your workouts every three to four weeks.

What we know today: Stay motivated and mix up your exercise routine.

Avoid foods with added sugar and salt. Jack told me that although he and his wife ate out almost every night, he still managed to eat healthy. How? One thing he did was avoid meat and eat mostly fish and vegetables. Another was to always bring his own salad dressing (a mixture of vinegar, canola oil, honey, soy sauce and a little sesame oil). At home, instead of cooking with oil, he used chicken or vegetable broth – low-salt, naturally.

What we know today: Salt can wreak havoc with your health.

Eat plenty of whole grains, fresh fruits and raw vegetables. Jack grew up eating a diet rich in sugar and not much else: donuts, cakes, cookies, candy – all the wrong foods. When, in 1929, he heard nutritionist Paul Bragg lecture about healthy foods, he made a major change in his diet and abandoned sugar forever. He especially was wary of empty calories, scolding viewers of his TV show that by dieting and eating low-calorie foods, they were eating foods “empty in the things that they should have."

What we know about the health benefits of whole food.

Constantly challenge yourself. To celebrate his 60th birthday, Jack swam, while handcuffed and shackled, the San Francisco Bay. Oh, and he also towed a 1,000-pound boat, just for some extra fun. When he turned 65, Jack towed 65 boats filled with 6,500 pounds of wood across a lake in Tokyo.

Weight-lifting is not only okay, it's a must. Until he opened up a gym in Oakland, California in 1936, encouraging athletes and women to lift weight, weight-lifting was shunned, thought of as too “masculine" for women and detrimental to the performance of athletes. He told me that athletes had to sneak into his gym to lift weights, since it was just not accepted at the time. He helped strengthen the bodies of men who wanted to become police officers so that they could pass the required physical fitness tests

Why weight lifting – especially for women – is so smart.