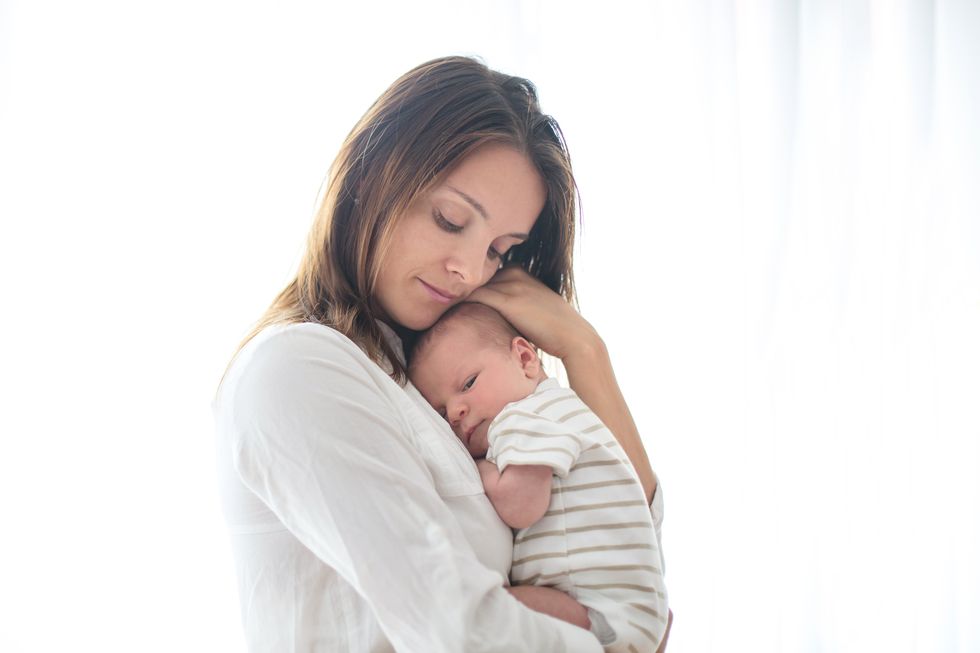 Living With Postpartum Depression and Anxiety Isn’t the End

I watched other new moms bonding with their infants saying it was the best thing that ever happened to them. To me it felt like the worst. But that’s not how my story ends.

Throughout my entire first pregnancy with my son Max, I couldn’t wait for him to come out. That big day came in the middle of the night on June 16th, 2006, and we were off to the hospital to finally meet our son.

After 18 hours of a physically and emotionally traumatic natural delivery, I was so exhausted when they put Max on my chest all I could think about was going to sleep.  That magical moment that you think is going to happen where you feel a burst of unconditional love for your new child when you see him for the first time—couldn’t have been further from how I felt. I just wanted to be alone. The next morning, we were discharged from the hospital, but I was scared out of my mind, without real sleep for days, sore and stunned. And we were told we could leave because he and I were doing fine. Nobody at the hospital told me about the baby blues let alone postpartum depression. Instead, I was given a bag filled with similac samples and was sent on my way.

READ More:Drowning in New Motherhood: My Journey Through Postpartum Depression and Anxiety

The first few weeks we were home together as a family, were a blur. I had complications nursing, Max was born jaundice, and he had this severe case of baby acne which made it hard for me to look at him. I felt flickers of elation and stretches of emptiness. I figured this was normal as my hormones were all over the place considering what my body had just been through.

At some point in the beginning, things took a bad turn and I became extremely anxious about everything that had to do with Max. I was obsessed with whether or not he was eating enough, sleeping enough. I was calling the pediatrician daily convinced that something was severely wrong. On top of the mounting paranoia, I felt totally trapped. Max refused to take a bottle and he would only sleep when he was in a sling on my body so we were constantly physically joined. But I didn’t feel emotionally connected to him at all; instead, I resented him for making me have this horrible new life that was unrecognizable.

I sunk deeper into a dark sea, wishing someone would throw me a life preserver. I watched other new moms bonding with their infants saying it was the best thing that ever happened to them. To me it felt like the worst.

At some point I stopped sleeping all together, I was so filled with anxiety at night, I lay in bed just waiting for Max to start crying. I lost my appetite, wouldn’t leave the house or talk to any friends. I would sit on the sofa and cry and beg my husband every morning not to leave, not to leave me alone with this unpredictable thing that I couldn’t control. I felt lonely and empty and scared and angry and so very hopeless.

At night I would sit on the bathroom floor while my husband and son slept, staring at the medicine cabinet thinking about the pills behind the door that I could take to make all the horrible feelings stop. Certainly the two of them would be better off without me. I wished I had never had Max; I hated myself for feeling that way and for being such a failure and a terrible mother. And I couldn’t tell anyone because I was so ashamed and disgusted with this pathetic shell of a self that I had become.

I want to stop here for a second and tell you that I am a social worker. I was trained to recognize and identify mental illness, but yet, I was totally unable to diagnose myself. I was lucky to get dressed in the morning.

One day, after weeks of not leaving the house, I went outside because it was the middle of summer and hot in our tiny apartment. I was pushing Max in the stroller in a daze and the light turned red at the corner as we reached it. I looked to the side of the street and saw a bus coming. I watched the front of the bus getting closer and closer almost in slow motion and in that second it was right there and I felt this overwhelming urge to throw Max and I right in front of that bus and end it. Just end it all. Make it stop. And as the bus passed by in front of us I watched myself in the reflection of the window and I saw this woman that I didn’t know—but I knew she needed help.

I hailed a cab and told the driver to take me to the nearest hospital.  I was seen by a psychiatrist, and within 5 minutes was diagnosed with severe postpartum depression and anxiety.

I went on medication, began talk therapy, and slowly I began to heal. Nine months after Max was born I went back to work and began to put the fragments of my life together. most importantly, I began to finally love my son more than anything else in the world—like I was supposed to.

What I didn’t know then was that one in five pregnant and new mothers suffer from perinatal mood and anxiety disorders (PMADs) otherwise referred to as postpartum depression. That number is alarming as is—yet we also know that only 30% of all women suffering from PMADs come forward, while the other 70% struggle silently for fear of judgment, shame and guilt. Many women fear that if they tell someone how they are really feeling, they may have their children taken away, which recently took place in Sacramento just a few months ago when a new mother told her nurse that she was afraid something bad was going to happen to the baby.

When I finally got better after Max was born, I swore to myself that I would do everything possible to ensure that no other women would have to suffer silently as I did. Now—11 years later—I am the proud Director of a program called The Motherhood Center, which provides treatment and support to new and expecting mothers suffering from PMADs.

What we do know is that with treatment, all new and expecting mommies suffering from PMADs get better.  If you or someone you know is suffering from a perinatal mood and anxiety disorder—get help. You are not alone and this is not your fault.