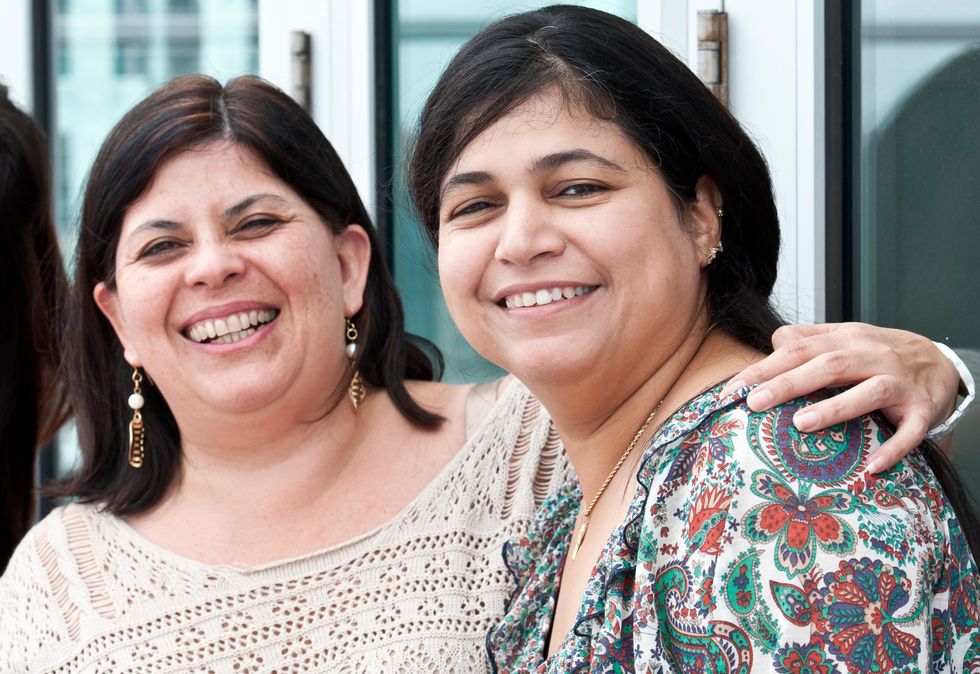 Are you wondering if you're seeing double when it comes to your chin?

Double chins are a common occurrence—and a common concern. A recent survey of consumers, conducted by the American Society for Dermatologic Surgery, found people just as bothered by double chins as they were by the lines and wrinkles around their eyes. Just as those can make you look older, so can a double chin.

And many people, despite their best efforts at a healthy diet and exercise, are plagued with this extra layer of fat beneath their chin. Sometimes, despite your best efforts to rid yourself of your extra chin, it may remain stubbornly present. You may even be slim and fit and still have a double chin, which can make you look heavier and older than you really are.

Take a look at your mother or father: Your double chin could be a function of genetics. Or, look at the scale: Weight gain can be to blame. Another culprit? Aging.

There are various things you can try to treat a double chin. Some are within your reach and don't require spending money or visiting a professional.

Sometimes losing weight can help, if extra weight is the cause of your double chin. And, if you don't mind sticking your tongue out as far as you can while looking straight ahead, then lifting it up toward your nose and holding it there, there's some anecdotal evidence that certain chin exercises (of which there are many) may help.

Of course, there's always the turtleneck, although you might not be a turtleneck fan (especially in warmer climates).

And then, there are more invasive procedures that can be done by a cosmetic surgeon, like liposuction, which breaks up fat from beneath the skin's surface and vacuums it out, or liposculpture, which uses heat to melt away fat and contour the skin.

A new procedure on the market, which got FDA approval in 2015, is an injectable called Kybella. It's a simple, minimally invasive, in-office procedure for people with moderate to severe fat under their chin. It uses injections of deoxycholic acid, a naturally occurring molecule in the body that aids in the breakdown and absorption of dietary fat, explains board certified plastic surgeon Stafford R. Broumand, MD. (It can also be injected by a board-certified dermatologist.)

The average fee is $1,250 to $3,000 per treatment, depending primarily on your neck and the amount of product needed. Most people require two to six treatments. It varies based on how much fat is there and what your goal is.

I spoke with Dr. Broumand recently, when I was invited to his office to watch a procedure.

Dr. Broumand, who is also an associate clinical professor at Mount Sinai Medical Center in New York City, told me that while results are evident after just one treatment (usually after about two to four weeks), it typically takes two or three treatments (sometimes more, depending on the severity of the double chin) to achieve optimal results. Side effects, which are usually temporary and go away on their own, can include swelling or bruising, pain, redness, numbness or areas of hardness.

But once the fat is gone, it's gone. No more double chin and a sleeker, better defined profile.

I watched as he injected his patient, a young man in his late 20s, who, though fit and thin, had inherited his double chin from dear ol' dad.

Dr. Broumand started with a thorough examination of my neck and underneath my chin, determining that I would be a candidate for Kybella. The procedure would be done right there and then—about 15 to 20 minutes in all. First, he cleaned the injection sites and his nurse then applied ice to numb the area. Then, he "tattooed" the area to be treated with a sticky ink pad he called "The Grid"—an array of black dots that would act as his roadmap of sorts for where to inject the Kybella. Dr. Broumand showed me several areas of my neck that he'd avoid—nerves that could trigger uneven facial expressions if they received the injection.

Once the ink dried, another ice application followed. When the nurse removed the ice the second time, my neck and the area under my chin were very numb.

I was confident that the procedure would be virtually pain free, as Dr. Broumand promised. He then began making the injections—20 in total, using four syringes. I felt a slight pinch with each prick … and as the injections continued, mild pain and some stinging. When he was finished with the injections, I received another application of ice. A short while after, the nurse then removed the ice, cleaned the remnants of the grid off my neck, and I was free to go. It would be another seven weeks until my next (and most likely last) round.

The area felt very numb and fairly sore in the days following the procedure, which is not to be unexpected, and is still fairly swollen—ironically making the appearance of a double chin more pronounced (I guess it has to get worse before it gets better!). Dr. Broumand said to expect the area to remain swollen for a couple of weeks.

(Gentlemen beware: Since the area under the chin is numb and swollen, it's hard to feel the pressure you apply with a razor when shaving, so definitely go easy!)

You may not be a candidate for Kybella. Or you might not choose to go this route. But isn't it nice to know there are options?

In the meantime, you can minimize the look of your double chin in photographs by making sure the lens is at your eye level or above when you pose for the camera. If the lens is below your eye level, experts say, it can give you the appearance of an extra chin—even if one doesn't exist.