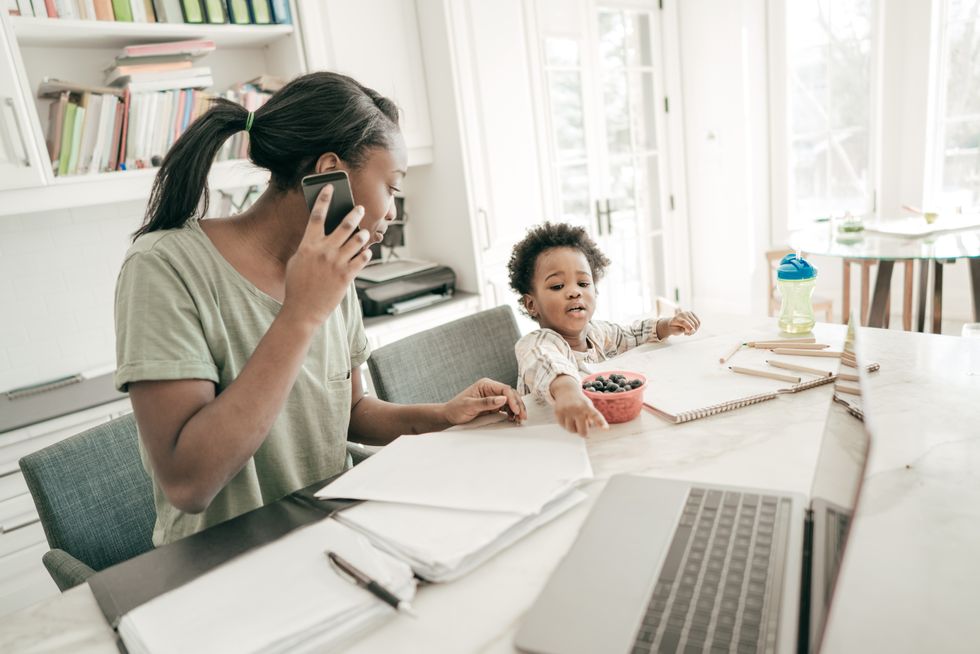 Without Child Care, Work and Family Are Impossible

Without Child Care, Work and Family Are Impossible

I am a political science professor and researcher, but lacking child care, I count myself lucky to work a few hours each day.

Without child care, life revolves around the toddler.

I am a political science professor and researcher, but lacking child care, I count myself lucky to work a few hours each day.

I am increasingly aware there is no such thing as the so-called work/family conflict. This is not only a personal observation. Scholars have found that good jobs – full-time, with benefits – and family, without help, are simply incompatible.

The concept is also wrong. If three-quarters of American women become mothers, and also most women do paid work, then doing both is, well, life; it's not some existential, context-free choice.

Work and family are both full-time pursuits. If the problem is framed as a choice between them, the battle is lost, since family will usually win. Telecommuting and "workplace flexibility" are important but do not make up for a lack of time and space to think and work.

Those who need care, especially little children, are needy and adorable, and mothers are evolutionarily disposed to focus on them.

(Whoops, excuse me, the toddler is trying to kill herself again … OK, child saved, with minimal screaming on both of our parts. Now what was I thinking? Did I reorder all our prescriptions? Hold on, I'll be back.)

The national shift to home-based work and schooling has had challenging consequences for parents, especially mothers. Sometimes these effects are lovely, like giving us more time with family, but if your goal is getting work done, good luck to you.

Working at home these days without child care is incredibly difficult unless I can escape to another room and close a door. This inevitably triggers screaming, but oh well.

She's worse than a cat; she climbs on me, presses things on the computer, sucks its edges and screams for attention, in addition to the normal baby bodily functions that comprise a disproportionate section of my thinking – when did she last poop? Is that a rash?

It's not just me.

Submissions from women to academic journals have plummeted since COVID-19 hit.

One geography professor tweeted, "It's hard enough to keep my head barely above the water with the kids at home and interruptions every 2 min … I can't imagine writing a paper now."

Another scholar said the data on diminished submissions from women made her cry because it wasn't just her.

It turns out that someone has to supervise – and sometimes force – children's learning, even if online, and this takes actual work. With parks, museums, sports, pools and movie theaters closed, and with kids mostly unable to hang out with friends, someone also has to do the physical and emotional labor of keeping children busy, engaged and upbeat. This too is work.

Then there is the simple fact that family members are eating, working and playing in houses most of the time, which means more cooking, more cleaning, more grocery shopping and, yes, more toilet paper.

(OMG the baby took a two-hour nap. I got to exercise and even shower. No time for leg-shaving but I'm still a new woman. Now what was I thinking…)

Because it is not just time, you see. Sometimes the child is playing quietly, and theoretically I could sit down and bang out a research article, but my brain is fuzzy as hell.

I used to wonder what cows thought, standing there chewing their cud in a field. Now I know. They are thinking nothing. Especially with the nursing, I have great sympathy with cows lately.

Before the baby, and before COVID-19, I had great plans for composing scholarly articles in my head during all that nursing downtime. But I forgot that hormones can change your brain and behavior.

Feminist theory and research finds that much of what people think of as "biological sex" – female or male – is socially constructed, as in, strongly based on culturally contingent assumptions about women and men as groups. I firmly believe, and teach, this as evidence-based truth.

Hormones, though, have undeniable physical and mental effects. If they are turning your body into a milk-production and child-protection facility, there can be some side effects on brain function. Many of these changes (increased empathy and vigilance) are useful evolutionarily, and the physical alterations appear to be short-lived. But there can also be negative effects on memory and focus. If your brain is your job, as mine is, this can cause some serious work disruption.

Pat Schroeder had two young children when first elected to Congress as a Democrat from Colorado in the 1970s. When asked how she could do both jobs, she famously replied, "I have a brain and a uterus, and I use them both."

I try to live up to Schroeder's standard, but lately I've found I have to qualify it; I tell myself she meant sequentially, not simultaneously.

Sequential is fine, as long as I have time and space to switch gears – I'm a first-time mom at 40 and the gears sometimes stick or stall out – and the peace of mind to focus beyond the child and the never-ending housework. We don't call this "women's work" anymore, and men do more than they used to, but it's essential work and still mostly done by women.

With luck and science, COVID-19 will recede soon, and we can trickle back to offices, for which I have a newfound respect.

Will the U.S. take something positive from this crisis by learning an enduring lesson about the power of child care?

Americans tend to think of having children as an expensive, private choice. The alternative is to think of it as a public good.

Other countries offer far more generous parental leave and low-cost, high-quality daycare, knowing that "work versus family" is a false formulation. The U.S. is losing serious talent and promoting gender inequality by continuing to misunderstand the problem.

There are many potential options when child care is made a priority in a society.

Government subsidies for child care centers would help low-income workers have access to good care. The U.S. almost managed this in 1971, when Congress passed, on a bipartisan vote, a bill to establish child care centers across the country, funded in part by the federal government. President Richard Nixon vetoed the bill.

Universal pre-K starting at age 3, as in New York City, is another option to advance the interests of working parents and children.

And because working parents are drowning in high child-care costs, the government could offer subsidies and tax relief for curriculum-based care – which encourages child development and learning as well as safety – for those early years. I make a pretty good salary, but still, an extra US$1,000 a month or more to ensure my child is safe and well cared for while I work is painful.

It's not a work-family conflict; it is a lack of high-quality, low-cost child care. Framing the problem otherwise damages the ability to enact good solutions.

It also makes a lot of good, hardworking parents feel enduring guilt over a problem that isn't theirs alone to solve.