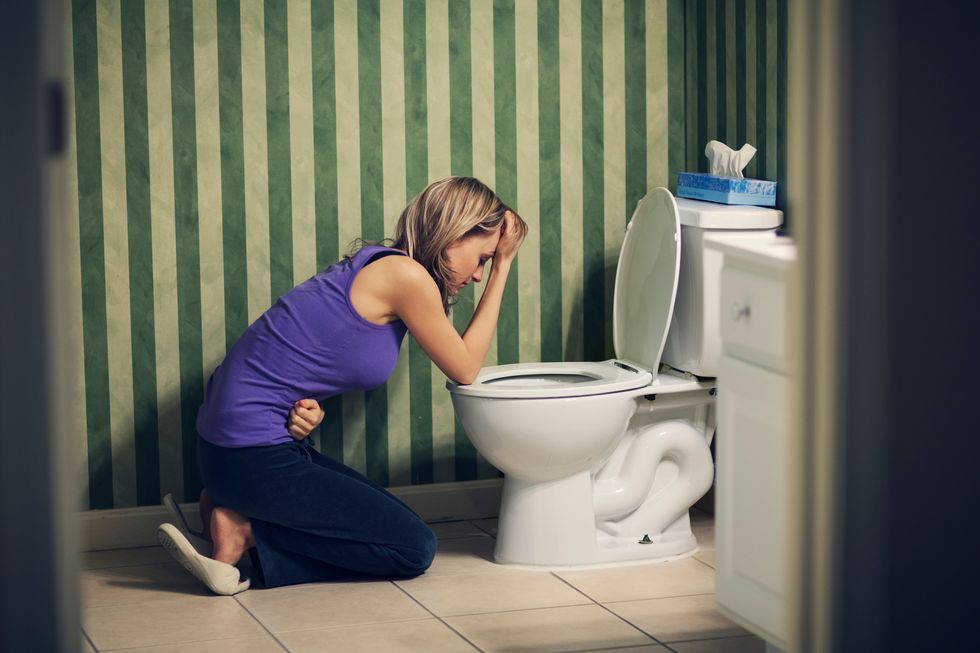 A stomach virus can make you feel miserable—nausea, vomiting, diarrhea. Here are some tips for avoiding stomach bugs.

You probably know from experience what to do when you get a stomach bug—rest, eat light, cut back on the caffeine and sip some ginger ale. And there's that tried-and-true BRAT (bananas, rice, applesauce and toast) diet that can replenish lost nutrients and ease you back into feeling better.

But do you know how to tell whether you have a stomach bug or the flu? You may have heard people say they have the "stomach flu," but the only kind of true "flu" is the one that causes distress to your upper respiratory system, resulting in coughing, sneezing, congestion, sore throat, fever, aches and pains and lack of energy. Th flu can also cause diarrhea and vomiting—but not always.

Viruses cause both flu and stomach bugs, but one of the main symptoms of the flu is the suddenness with which it strikes and the severity of the symptoms. Plus, the flu usually lasts one to two weeks, while a stomach virus may be gone in 24 hours.

That's not to say that a troubled tummy does not carry some pretty awful intestinal symptoms—vomiting, diarrhea, stomach cramping, occasional muscle aches, headache and sometimes a low-grade fever.

Whether you call it by its official name—"viral gastroenteritis"—or just an upset stomach or stomach bug or stomach virus—it's something you'll want to avoid.

But how do you avoid it?

Both viruses and bacteria can cause stomach illnesses. Common viruses include the norovirus, rotavirus and adenovirus. A stomach bug can come from eating or drinking contaminated food or water or sharing eating utensils or towels with an infected person.

Over 20 million people in the United States get a stomach virus each year, so there are a lot of germs circulating.

Consider the rotovirus vaccine for your child. In some countries—including the United States—this vaccine is available to protect against gastroenteritis caused by the rotavirus. Because the rotavirus is more common in babies and young children, it is recommended for very young children. The first dose is given at 2 months of age; the second, at 4 months and the third (if needed) at 6 months. Click here for more in-depth information.

Wash your hands thoroughly. This is especially important if you've been around someone who is sick. Use warm water and soap and vigorously rub your hands together for at least 20 seconds—and don't forget areas like around your cuticles, beneath your fingernails and the creases of your hands. Always carry hand sanitizer in the event you can't get to a sink.

Steer clear of infected people. Whenever possible, stay away from anyone with the virus.

Disinfect. Hard surfaces like counters, faucets, doorknobs, phones and TV remote controls can harbor viruses. Disinfect with a mixture of two cups of bleach dissolved in one gallon of water.

Use precautions when away from home. If you're traveling, especially in foreign countries, it's best to drink water from bottles that are securely sealed. Also, because ice cubes may be made with contaminated water, skip them. Using bottled water to brush your teeth is a good idea, too. And, when you eat, avoid undercooked meats and fish as well as raw foods (including things that have been prepared and touched by human hands, like peeled fruits, raw veggies and salads.)

So what if you DO get a stomach bug?

Symptoms of viral gastroenteritis appear between one and three days after you've become infected and usually last a couple of days but can linger for up to 10 days. (Conversely, food poisoning, whose symptoms are usually more severe, occurs rather quickly—just two to six hours after eating contaminated food.)

To prevent dehydration caused by water loss due to vomiting and diarrhea, it's important to remember to suck on ice chips or take small sips of water while you recover. If you can tolerate it, try things like clear soda and broths or (noncaffeinated) sports drinks, which can replenish some lost electrolytes.

When you feel like you can tolerate food, ease back into it by gradually adding easy-to-digest foods, and stop eating if the nausea returns. Avoid dairy products, fatty or heavily seasoned foods, caffeine, nicotine and alcohol until you feel better. And use caution when taking certain medications, which can upset your stomach even more.

Are These Gassy Foods Giving You a Bloated Stomach?