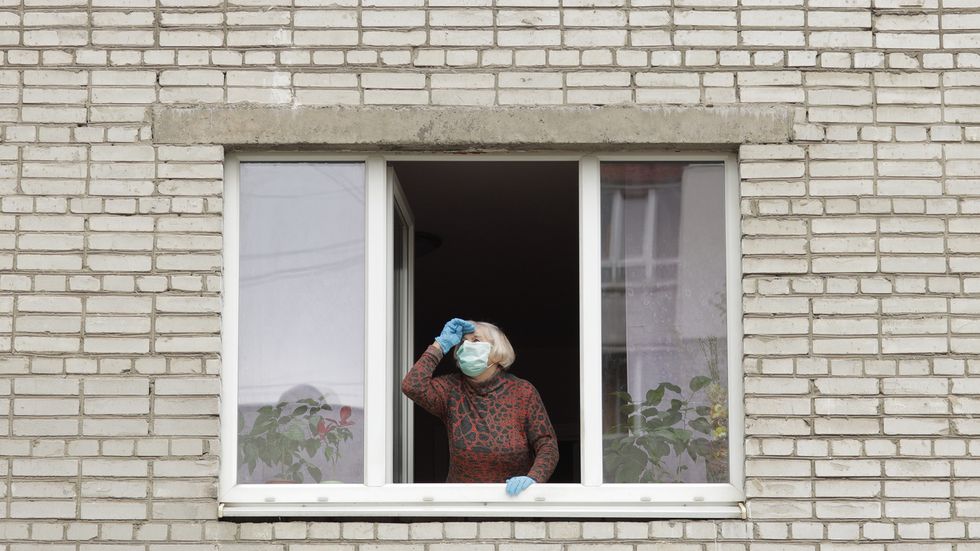 For Seniors, COVID-19 Sets Off a Pandemic of Despair

As states relax coronavirus restrictions, older adults are advised, in most cases, to keep sheltering in place. But the burden of isolation is hard to bear.

As states relax coronavirus restrictions, older adults are advised, in most cases, to keep sheltering in place. But for some, the burden of isolation and uncertainty is becoming hard to bear.

This “stay at home awhile longer” advice recognizes that older adults are more likely to become critically ill and die if infected with the virus. At highest risk are seniors with underlying medical conditions such as heart, lung or autoimmune diseases.

Yet after two months at home, many want to go out into the world again. It is discouraging for them to see people of other ages resume activities. They feel excluded. Still, they want to be safe.

“It’s been really lonely,” said Kathleen Koenen, 77, who moved to Atlanta in July after selling her house in South Carolina. She’s living in a 16th-floor apartment while waiting to move into a senior housing community, which has had cases of COVID-19.

“I had thought that would be a new community for me, but everyone there is isolated,” Koenen said. “Wherever we go, we’re isolated in this situation. And the longer it goes on, the harder it becomes.”

(Georgia residents age 65 and older are required to shelter in place through June 12, along with other vulnerable populations.)

Her daughter, Karestan Koenen, is a professor of psychiatric epidemiology at Harvard University’s T.H. Chan School of Public Health. During a Facebook Live event this month, she said her mother had felt in March and April that “everyone was in [this crisis] together.” But now, that sense of communality has disappeared.

Making it worse, some seniors fear that their lives may be seen as expendable in the rush to reopen the country.

On the positive side, resilience is common in this age group. Virtually all older adults have known adversity and loss; many have a “this too shall pass” attitude. And research confirms that they tend to be adept at regulating their reactions to stressful life events — a useful skill in this pandemic.

“If anything, I’ve seen a very strong will to live and acceptance of whatever one’s fate might be,” said Dr. Marc Agronin, a geriatric psychiatrist and vice president of behavioral health at Miami Jewish Health, a 20-acre campus with independent living, assisted living, nursing home care and other services.

Several times a week, psychologists, nurses and social workers are calling residents on the campus, doing brief mental health checks and referring anyone who needs help for follow-up attention. There’s “a lot of loneliness,” Agronin said, but many seniors are “already habituated to being alone or are doing OK with contact [only] from staff.”

Still, “if this goes on much longer,” he said, “I think we’ll start to see less engagement, more withdrawal, more isolation — a greater toll of disconnection.”

From mid-March to mid-April, all her conversations with older patients revolved around several questions: “How do we keep from getting COVID-19? How am I going to get my needs met? What’s going to happen to me?”

But more recently, Cassidy-Eagle said, “older adults have realized the course of being isolated is going to be much longer for them than for everyone else. And sadness, loneliness and some hopelessness have set in.”

She tells of a woman in her 70s who moved into independent living in a continuing care community because she wanted to build a strong social network. Since March, activities and group dining have been canceled. The community’s director recently announced that restrictions would remain until 2021.

“This woman had a tendency to be depressed, but she was doing OK,” Cassidy-Eagle said. “Now she’s incredibly depressed and she feels trapped.”

Especially vulnerable during this pandemic are older adults who have suffered previous trauma. Dr. Gary Kennedy, director of the division of geriatric psychiatry at Montefiore Medical Center in New York City, has seen this happen to several patients, including a Holocaust survivor in her 90s.

This woman lives with her son, who got COVID-19. Then she did as well. “It’s like going back to the terror of the [concentration] camp,” Kennedy said, “an agonizing emotional flashback.”

Jennifer Olszewski, an expert in gerontology at Drexel University, works in three nursing homes in the Philadelphia area. As is true across most of the country, no visitors are allowed and residents are mostly confined to their rooms.

“I’m seeing a lot of patients with pronounced situational depression,” she said — “decreased appetite, decreased energy, a lack of motivation and overall feelings of sadness.”

“If this goes on for months longer, I think we’ll see more people with functional decline, mental health decline and failure to thrive,” Olszewski said.

Some are simply giving up. Anne Sansevero, a geriatric care manager in New York City, has a 93-year-old client who plunged into despair after her assisted living facility went on lockdown in mid-March. Antidepressant and anti-anxiety medications have not helped.

“She’s telling her family and her health aides ‘life’s not worth living. Please help me end it,’” Sansevero said. “And she’s stopped eating and getting out of bed.”

The woman’s attentive adult children are doing all they can to comfort their mother at a distance and are feeling acute anguish.

What can be done to ease this sort of psychic pain? Kennedy of Montefiore has several suggestions.

“Don’t try to counter the person’s perception and offer false reassurance. Instead, say, yes, this is bad, no doubt about it. It’s understandable to be angry, to be sad. Then provide a sense of companionship. Tell the person, ‘I can’t change this situation but I can be with you. I’ll call tomorrow or in a few days and check in with you again.’”

“Try to explore what made life worth living before the person started feeling this way,” he said. “Remind them of ways they’ve coped with adversity in the past.”

If someone is religiously-inclined, encourage them to reach out to a pastor or a rabbi. “Tell them, I’d like to pray together or read this Bible passage and discuss it,” Kennedy said. “Comforting person-to-person interaction is a very effective form of support.”

Do not count on older adults to own up to feeling depressed. “Some people will acknowledge that, yes, they’ve been feeling sad, but others may describe physical symptoms — fatigue, difficulty sleeping, difficulty concentrating,” said Julie Lutz, a geropsychologist and postdoctoral fellow at the University of Rochester.

If someone has expressed frequent concerns about being a burden to other people or has become notably withdrawn, that’s a worrisome sign, Lutz said.

In nursing homes, ask for a referral to a psychologist or social worker, especially for a loved one who’s recovering from a COVID hospitalization.

“Almost everybody that I’m seeing has some kind of adjustment disorder because their whole worlds have been turned upside down,” said Eleanor Feldman Barbera, an elder care psychologist in New York City. “Talking to a psychologist when they first come in can help put people on a good trajectory.”

The National Alliance on Mental Illness has compiled a COVID-19 information and resource guide, available at https://www.nami.org/covid-19-guide. The American Psychological Association has created a webpage devoted to this topic and recently wrote about finding local mental health resources. The Substance Abuse and Mental Health Services Administration has a 24-hour hotline, 1-800-662-4357. And the national suicide prevention hotline for those in acute distress is 1-800-273-8255.