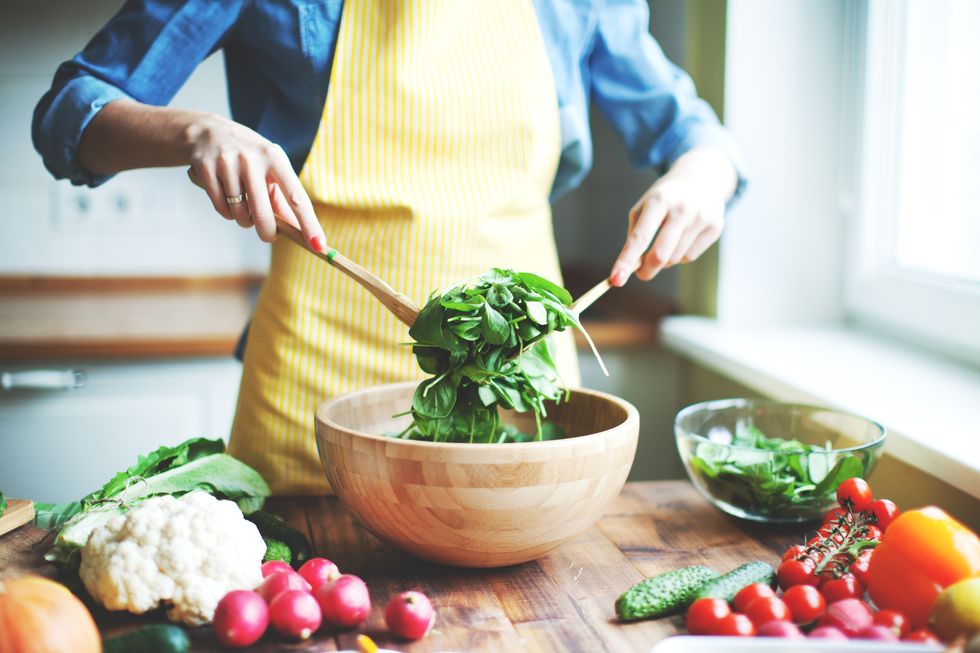 Turns out that the old adage—an apple a day keeps the doctor away—may actually be true.

(HealthDay News) -- Turns out that the old adage -- an apple a day keeps the doctor away -- may actually be true. New research suggests that the more plant foods you eat, the lower your risk of type 2 diabetes.

READ: What to Eat When You Have Diabetes

People who ate a mostly plant-based diet reduced their risk of diabetes by 23%, the study found.

The association was even stronger -- a 30% drop in risk of type 2 diabetes -- for people who ate healthy plant-based foods, including veggies, fruits, legumes, nuts and whole grains. These foods contain fiber, vitamins, minerals, antioxidants and other beneficial ingredients.

So, what isn't an especially healthy plant food? Processed foods and foods with added sugar. Think foods like white bread, white pasta, breakfast cereal, chips or cookies. The researchers also didn't include starchy vegetables, such as potatoes, in their healthy-choices list.

"A plant-based diet is very healthful in reducing the risk of type 2 diabetes," said the review's senior author, Dr. Qi Sun. He's an associate professor at the Harvard T.H. Chan School of Public Health in Boston.

And the more healthy plant foods, the better, Sun said. But "you should be picky about what types of foods you count as plant-based," he added.

Sun also explained that a diet doesn't have to be strictly vegan or vegetarian to be healthy. He said it's a good idea to minimize animal protein, but choices like fish, chicken and yogurt can still be part of a healthful diet.

The study didn't spell out exactly why a mainly plant-based diet appeared to lower type 2 diabetes risk. The researchers controlled the data to account for weight, but Sun said people who eat more plant-based foods may maintain a healthier weight, leading to a lower diabetes risk.

He said it's also possible that beneficial compounds, like antioxidants and beneficial plant oils, might help promote insulin sensitivity or reduce inflammation. If you're eating more plant foods, you're probably eating fewer animal products. And that reduces the amount of potentially harmful substances you consume, such as cholesterol, saturated fat and sodium.

The review included nine nutrition studies published between 2008 and 2018. These studies included more than 300,000 people, nearly 24,000 of whom had type 2 diabetes.

The researchers analyzed the nutrition information provided by study volunteers.

While the investigators found a link between plant-based foods and lower odds of diabetes, the authors noted that the study wasn't designed to find a definitive cause-and-effect link.

"I love the thought of people eating more veggies, fruits, whole grains, nuts and legumes. But when people hear they should eat a mostly plant-based diet, they imagine that as eating a big head of broccoli," she said.

And, while you certainly can eat as much broccoli as you like, Nelson said a healthy, mostly plant-based diet can include lots of appealing options -- a simple one is apples and peanut butter. Her favorite is a vegetable-filled gumbo. A kebob with more veggies than meat also fits the bill.

"It's not just what you eat, but also how much," Nelson added. So forgoing sausage for dinner can be a healthy choice, but if you then consume half a chicken instead, you'll lose those benefits. When it comes to protein sources, she recommended eating no more than six ounces a day. That's about the size of two decks of playing cards.

Sun suggested considering red meat or processed meats such as bacon or cold cuts as an occasional treat. He recommended limiting them to no more than one serving a week.