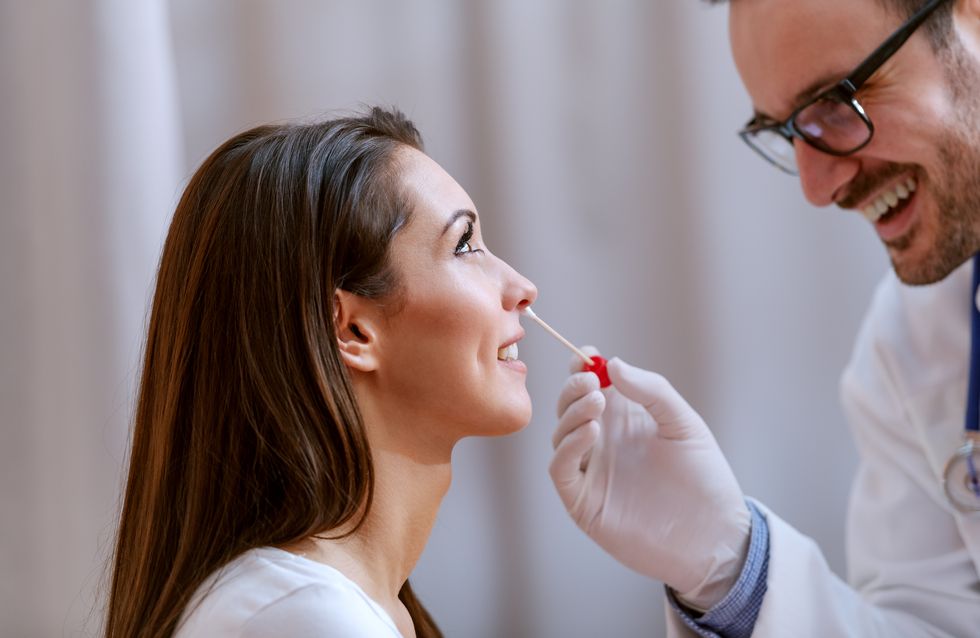 THURSDAY, Oct. 24, 2019 (HealthDay News) -- Could a person's risk for lung cancer someday be determined with a quick swab of the nose?

READ: Why Are Women Who Never Smoked Getting Lung Cancer?

If the preliminary findings of a new study are any indication, it's a distinct possibility.

The experimental nasal swab relies on the fact that most lung cancer patients are current and former smokers. It's meant to be a noninvasive means of separating high-risk patients from low-risk patients, by spotting signs of gene damage produced by long-term exposure to cigarette smoke.

"[But] this is not a screening tool," stressed study author Dr. Carla Lamb, director of interventional pulmonology at Lahey Hospital and Medical Center in Burlington, Mass.

Instead the swab's purpose is "to help us determine which [suspicious] lung nodules require more invasive evaluations." The overriding goal, she said, is "to help guide that decision-making."

"The [standard] method used for early detection is the low-radiation-dose CT scan," noted Edelman, who was not part of the study. "A major problem with this method is that it's often difficult to decide whether an abnormality it picks up is or is not cancer."

The study team made the same point, noting that the vast majority of the roughly 2 million lung nodules identified every year in the United States turn out to be benign.

But in the absence of foolproof noninvasive tools, doctors are often left to make initial best guesses based on "clues and clinical judgment," explained Edelman.

Lamb noted, "This uncertainty can lead to either unnecessary invasive diagnostic procedures or delay in diagnosis and treatment."

So, with funding from the swab test's manufacturer (Veracyte, a genomic diagnostics company based in San Francisco), the team set out to assess the test's effectiveness among a pool of 261 patients.

All had previously undergone CT scans, and those scans had unearthed potentially problematic lung nodules. Further testing later confirmed which patients truly had lung cancer and which didn't. But while the swab investigation was underway, no one on the study team knew the definitive results.

After using the swab to brush across each patient's nasal passage, the collected contents were subjected to rigorous genetic testing.

If the test unearthed signs of smoke-induced damage, the patient would be classified as "high-risk." That did not necessarily mean that he or she had lung cancer. But it meant that more invasive testing was warranted, along the lines of tissue excision and analysis (biopsy). Only invasive follow-up testing -- not the swab test alone -- could confirm lung cancer.

On the other hand, if the test found no signs of damage, then a patient could be deemed "low-risk." He or she would then be spared the ordeal of more invasive exams, in favor of routine CT scans and monitoring.

The team said that the test performed "consistently" across all lung nodule sizes, nodule locations and cancer types and stages.

And the results "had a very high specificity," said Lamb, meaning that patients deemed high-risk and sent for further tests were very likely to have lung cancer.

The study findings suggest that "the test developed by these investigators should reduce the uncertainty as to whether an abnormality is benign or malignant in about 40% of people scanned," Edelman said.

"And this may well be useful in the decision-making process," he agreed. But he cautioned that as it stands, "the test is not specific enough to replace all of the other tools doctors now use to determine whether an abnormality is malignant or not."

For the time being, Edelman said, "the best advice to former and current smokers is to check with your doctor to see if you are eligible for CT scan screening. It could save your life."

The findings -- which are considered preliminary and have not yet undergone peer review -- were presented this week at the American College of Chest Physicians (CHEST) annual meeting, in New Orleans.

After losing my close friend to cancer that was diagnosed too late, I knew I had to advocate for myself