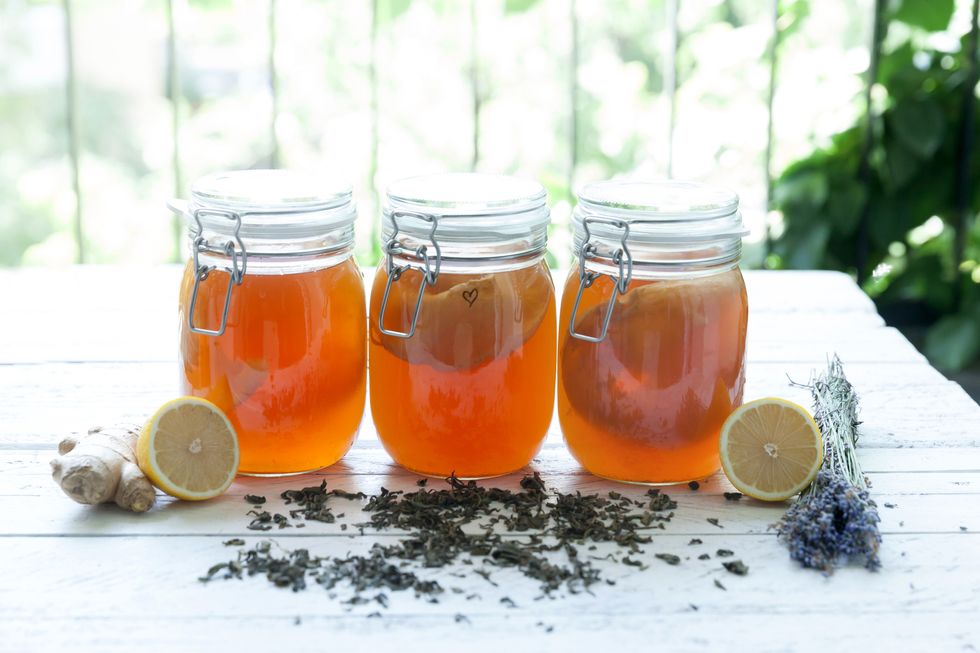 Is Kombucha Good for You

Is Kombucha Good for You?

Do you like the fizzy, fermented bacteria-laden kombucha tea for its health benefits?

But experts say it's not clear whether the bacteria-laden beverage lives up to all of its health claims.

Proponents say kombucha's powerful probiotics can help improve digestion, promote your immune response and reduce inflammation in your body by introducing healthy bacteria into your gut.

"Kombucha is a living food, and can be highly effective in restoring an individual's microbiome and an overall feeling of good health," said Barbara Cole, a nurse practitioner with Penn State Health Medical Group.

Read More: Digestive Troubles? Learn About Probiotics and 6 Foods to Add to Your Shopping List Now

The drink is a source of live beneficial bacteria and yeasts, organic acids, B vitamins, antioxidants and trace minerals, Cole said.

But while kombucha is undeniably a good source of probiotics, it's yet to be seen whether the drink lives up to all of the hype, said Torey Armul, a registered dietitian nutritionist and spokeswoman for the Academy of Nutrition and Dietetics.

"There's a lot of health claims behind it, most of which I would say are unfounded, not backed by research," Armul said.

"It can do A to Z if you listen to the right people: 'It can cure every health malady and help with all sorts of things.' There's really not enough research to support the vast majority of those claims," she said.

Kombucha is made by adding bacteria, yeast and sugar to brewed tea. The mixture sits for one to two weeks, fermenting as the sugar feeds the yeast.

The resulting fizzy tea can be an "acquired taste," Cole said.

"It's more on the vinegar side," Cole said. "If you're looking for a sugar rush, you're not going to get it with kombucha. If you do get kombucha that's cloyingly sweet, it's probably not that good for you."

Kombucha tea has hit the mainstream in a major way. Cans and bottles can be purchased in grocery stores, and kombucha is available from the keg at a number of hip bars and tap houses.

People should avoid brands that are pasteurized, since that process kills the beneficial bacteria, Cole said.

There also are people who brew kombucha locally, depending on where you live, Cole said. These folks are subject to state laws on food preparation and safety, and you should make sure they've been properly licensed and vetted.

If refrigerated or sealed in the right way, kombucha should keep as well as other drinks that rely on fermentation, such as beer or wine, Cole said. It can go bad, however, and should be discarded if it does.

"Because it does have live bacteria and yeast, there is a risk for foodborne illness if you don't have it stored properly," Armul said.

Many kombucha lovers even like to home-brew their own batches, but Cole and Armul warn that sterile conditions must be maintained to keep from producing a funky batch that will make you sick.

"Anytime you have people doing their own home brew under conditions that are not sterile, there is the potential for contamination," Armul said.

However, all of these effects were found in the lab, mainly in mice, rats or human cells under the microscope, according to the review. There's a lack of evidence supporting these claims in humans, outside of the general positives associated with any probiotic-laden foods, Armul said.

On the other hand, there have been reports of adverse effects associated with kombucha, according to the Mayo Clinic. These include upset stomach, infection and allergic reactions.

Unless you've got a real taste for kombucha, you'll do just as well getting your probiotics from sources such as yogurt, sourdough, sauerkraut or kimchi, Armul advised.

"I think most people are not getting enough probiotics, but kombucha is just one source of probiotics, and there are risks and negatives associated with it," she said.