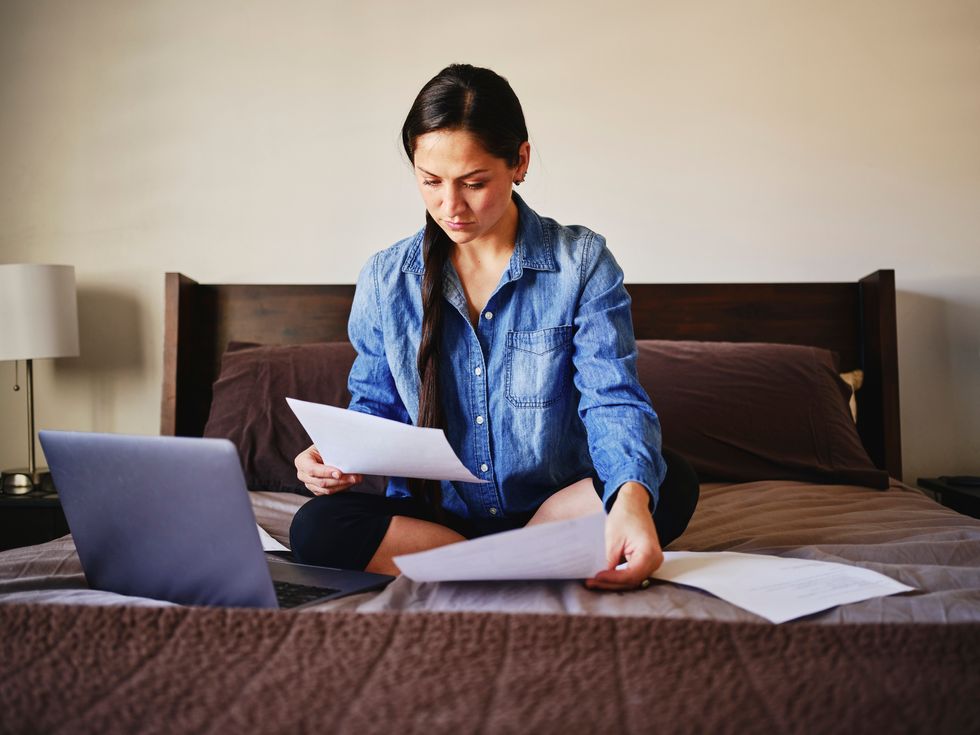 People looking for lower cost health insurance may lead them to options that are scams not regulated by state insurance rules. These plans likely don’t meet ACA requirements and can leave people with very high health care the “insurance” won’t pay for, pa

Jill Goodridge was shopping for affordable health insurance when a friend told her about O'NA HealthCare, a low-cost alternative to commercial insurance.

The self-described "health care cooperative" promised a shield against catastrophic claims. Its name suggested an affiliation with a Native American tribe — a theme that carried through on its website, where a feather floats from section to section.

The company promises 24/7 telemedicine and holistic dental care on its website. It says it provides more nontraditional options than "any other health care plan," including coverage for essential oils, energy medicine and naturopathic care. All of that and conventional care, too.

It struck Goodridge as innovative. She signed up for a high-deductible plan, paying more than $9,000 in premiums and fees over 13 months, she said. Yet she could not get O'NA to cover her family's medical bills. For example, O'NA applied only a small portion of more than $6,000 in hospital-related bills against her $10,000 deductible.

"It almost seemed like we were just spending the premium money every month for really not much," said Goodridge, whose family runs a Rockland, Maine, restaurant that is temporarily shuttered because of the coronavirus pandemic.

A year-long investigation by the state insurance agency prompted by her complaint concluded she was right, uncovering a business scheme operating in the gray areas of insurance regulation and tribal law to appeal to patients looking to save money on health care.

Hers is a cautionary tale for anyone looking for cut-rate coverage at a time when the cost of commercial insurance is rising and a wide range of alternatives are on offer.

"Health insurance is getting so expensive people are looking for other options," Maine insurance Superintendent Eric A. Cioppa said. "We tell everybody that if you do business over the internet to call us first and make sure it's licensed."

O'NA stood out, with a polished website featuring its story of holistic health and sun-dappled photographs. The sales pitch: "We're here to guide you to a new way for your mind, body, and soul."

The company claimed Native American ties that would exempt it from state insurance regulations because of tribal sovereignty, which gives federally recognized tribes the authority to self-govern outside of state or federal law. O'NA claimed it did not have to adhere to federal insurance requirements, such as guaranteeing standard coverage or maintaining a designated level of funds in reserve to pay claims.

O'NA HealthCare appears to be the first insurer to claim that Native American status exempted it from oversight, according to the National Association of Insurance Commissioners.

The company advertised it was "comfortably nestled under a Native American tribal corporate umbrella" and "protected by the many rights and privileges that Native American Indians enjoy today."

It sent its customers a "tribal membership ID & benefits card." And it said it derived its status from an affiliation with the United Cherokee Nation-Aniyvwiya. That tribe is not one of the three federally recognized Cherokee tribes.

But the troubles with O'NA went deeper than that, Cioppa and his team discovered during a year-long investigation. Along with serious doubts that anyone involved with O'NA had valid indigenous roots, there were financial irregularities, allegations of embezzlement and phony professional credentials.

"The more we found out," Cioppa said, "the more we wanted to keep digging."

For Patients, A Tempting Offer With Red Flags

There was much about Goodridge's new coverage that seemed unorthodox to the investigators.

She paid a tribal membership fee of $165, which the company said was a tax-deductible contribution to an unspecified Native American tribe. In addition to traditional medicine, O'NA said, its members could seek care at "Native American Tribal Healing Centers" nationwide, though it did not identify the centers or their locations. Goodridge also paid a family premium of $751 a month for 13 months before canceling, according to her testimony before the Maine Bureau of Insurance.

Stranger still, investigators found that O'NA required physicians to pay $485 a year to join its network. Her doctor declined.

On top of that, Goodridge testified, the plan did not pay out when needed, including much of that $6,000-plus hospital bill.

It turned out, that was not uncommon for a company that describes its services as "low cost, high value." According to a state inspection of O'NA's unaudited books in fall 2019, the plan spent an "unusually low" amount of the $2.5 million it collected in premiums to cover customers' medical bills — just 13% or less. Under federal law, most insurers spend 80% or more on benefits for subscribers.

"However low its prices may be, the value it delivers is even lower," Cioppa wrote in his December order.

Cioppa told KHN that state investigators could not determine the full scope of the operation, partly because O'NA, which boasted an "open provider network across all 50 states," refused to tell them how many members it had signed up nationwide. It covered only 27 people in Maine.

O'NA's bookkeeping also turned out to be suspect. Maine investigators observed that in 2019 O'NA paid few medical bills and didn't keep enough cash on hand to handle even a couple of catastrophic illness claims, a violation of state insurance regulations.

Ultimately, Cioppa ruled that O'NA had illegally operated an insurance company, falsely advertised its benefits and failed to set aside adequate reserves to pay claims.

O'NA's CEO, L.J. Fay, said the company is working hard to overcome past mistakes, noting: "We plan to make everything right. That is the ultimate goal."

But in the meantime, Cioppa has prohibited O'NA from selling policies in the state.

Over the years, Benjamin Zvenia has presented himself at various times as a doctor, a lawyer and a tribal judge. O'NA was described by the United Cherokee Nation-Aniyvwiya as Zvenia's "brainchild," according to the Maine insurance bureau order.

He has a paper trail of criminal and civil infractions dating to the early 1990s, government records show.

In a sworn statement filed in Maine, Zvenia said he was a member and "administrative tribal judge" of the Nottoway Tribal Community Meherrin Band of North Carolina. That tribe is not among the 573 recognized by the federal government.

Zvenia also told Maine officials he served on the board of directors of Tribal Active Management Services, O'NA HealthCare's parent company, but had not been paid for his "voluntary" services and had no responsibility for day-to-day operations. In a sworn statement, Zvenia denied playing a major role in O'NA. He did not respond to repeated requests for comment for this story.

Zvenia, in fact, has a criminal conviction in Nevada for practicing medicine without a license, which prohibits him from overseeing an insurance company, according to Maine officials. He was sentenced to six years in prison, court records show.

In his statement, Zvenia wrote, "There was a crime, and I did the time. My previous history may be public information, but it is not part of my accomplishments today."

Zvenia's legal work also has drawn scrutiny. In March 1999, the Nevada Supreme Court removed him from a list of non-attorney arbitrators, citing his undisclosed criminal conviction. A State Bar of Nevada investigation found Zvenia had applied to practice in immigration court, claiming to hold a law license issued by the Supreme Court of the Federated States of Micronesia. But the state bar checked with Micronesia, and it could not verify his claims.

Zvenia also told a state bar investigator that he graduated from the Kensington College "School of Law" in California. The college said Zvenia had applied in June 1994 but "never completed enrollment," according to an exhibit filed with the Nevada Supreme Court order.

A founder of O'NA HealthCare was Alan Boyer, a Utah musician who said he was a member of the Cherokee Nation. He was born in West Yorkshire, England, and emigrated to the U.S. in 1998, when he was nearly 40 years old.

Boyer was a founder of a British-style brass band in Utah but also dabbled in the holistic healing arts and naturopathic products before his death in December 2018 from cancer at age 59. In one promotional video for O'NA, Boyer, who spoke with a pronounced British accent, said the word O'NA means "new beginnings."

"One of Alan's greatest achievements in his later years was acceptance as a sovereign member of the great Cherokee Nation," reads an online obituary entered into the record in the Maine proceeding.

Maine regulators had their doubts: "It does not appear from the record that any Native Americans have been involved at any time in the establishment, management or operation of O'NA," reads the state order.

Lisa Hughes, the former CEO of O'NA and a resident of the Salt Lake City area, also raised Maine regulators' eyebrows. Investigators found Hughes' online résumé shows more than a decade of experience in rocket engineering and consulting work in Utah. She recently told Maine officials she had been hired at O'NA because of her prior experience in "systems development and cashflow analysis."

In an affidavit and other legal filings filed in January, Hughes asserted she worked for O'NA for several years "with no or very reduced salary" before the company suspended her in July 2019 amid a corporate power struggle. The next month, O'NA sent her a letter from a law firm accusing her of embezzling $295,000, filings in the Maine investigation show.

In her affidavit, Hughes said O'NA concocted the embezzlement accusations "for purposes of smearing me and making me the scapegoat for O'NA's legal formation and structure."

Lessons Learned ― Or Not

In his December order, Cioppa gave the insurer until Jan. 21 to create a $100,000 fund to satisfy any outstanding medical claims. O'NA failed to do so, and now state officials are seeking a $450,000 penalty, though they aren't optimistic about collecting it.

Today, O'NA has promised to reinvent itself as a "different type of insurance company," according to CEO Fay. She said in an affidavit that it is anticipating a capital infusion of as much as $120 million and has $500,000 in reserves in a money market account in a Salt Lake City bank. She also indicated the company would file for a license to legally operate in Maine. So far, that has not happened.

Zvenia is still active online, offering professional and consulting services through Zvenia and Associates in Las Vegas, which says on its website that it is a "law firm guided by Benjamin Zvenia, Dr PH, JD." The site posts a disclaimer: "All Nevada State legal matters are referred out; our lawyers & advocates are not licensed to practice Nevada State law."

O'NA presents a new wrinkle in an ongoing conflict: The states regulate insurance but the internet allows for nationwide sales, leaving consumers basically on their own.

Goodridge, the Maine consumer who sparked the investigation, said in an interview that she holds little hope of getting any money back. But she has kept other Mainers from the same troubles.

Though O'NA health plans are still available in many states, its website notes that coverage is "not available in Maine."