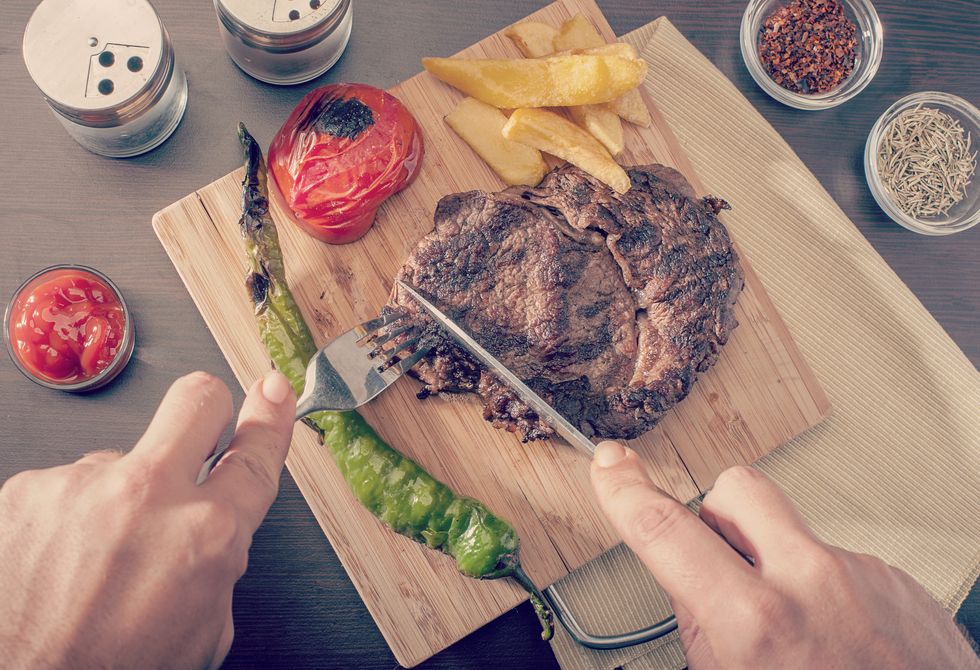 Does Your Husband Eat Lots of Red Meat?

Men who eat a lot of red meat may have a higher risk of a painful inflammatory condition of the colon, a new study suggests.

TUESDAY, Jan. 10, 2017 (HealthDay News)—Men who eat a lot of red meat may have a higher risk of a painful inflammatory condition of the colon, a new study suggests.

The disorder, called diverticulitis, causes severe abdominal pain, nausea and constipation. And it can lead to complications such as tears or blockages in the colon.

On the other hand, he said, there are already reasons to think about cutting down on red meat. Heavy consumption has been tied to higher risks of heart disease and certain cancers, Chan pointed out.

"This study offers one more reason to consider limiting the red meat in your diet," he said.

As people age, it's common for "pouches" to form in the lining of the colon; over half of Americans aged 60 and older have them, according to the U.S. National Institutes of Health.

Most people who have these pouches suffer no problems, but around 5 percent develop diverticulitis—where the pouches become infected or inflamed.

Roughly 200,000 Americans are hospitalized for diverticulitis each year, the NIH says.

The new findings, published online Jan. 9 in the journal Gut, are based on a long-term study of more than 46,000 male health professionals.

Over 26 years, 764 men developed diverticulitis. The risk was highest among men who were in the top 20 percent for red meat intake: They were 58 percent more likely to be diagnosed with the condition, versus men in the bottom 20 percent.

Men in that top group averaged over 12 servings of red meat per week, while those with the lowest consumption averaged slightly more than one weekly serving.

Of course, there could be many differences between men who eat a lot of burgers and other meats, and those who don't, the study authors noted.

So Chan's team accounted for factors such as older age, smoking, obesity, lack of exercise and low fiber intake—all of which have been tied to a higher diverticulitis risk.

Even then, red meat was still linked to a higher risk—particularly unprocessed meat, such as steaks and burgers.

It's not clear what can be made of that, according to Chan. A potential explanation, he said, is that people typically eat larger portions of unprocessed red meat, compared with processed lunch meats.

A dietitian who wasn't involved in the study said it's "impossible" to draw any conclusions about cause-and-effect.

However, other studies have linked high red meat intake to diseases of the colon, said Lona Sandon. She is an assistant professor of clinical nutrition at the University of Texas Southwestern Medical Center, in Dallas.

Plus, she said, everyone should be striving for more vegetables, whole grains and a range of different proteins.

"Really, it comes down to having more variety in your protein choices," Sandon said. "Switch out red meat with fish or poultry, or even plant sources such as tofu, beans and legumes."

"So there might be a benefit from substituting red meat with fish or poultry," Chan said.

Why would red meat contribute to diverticulitis? That's not clear, Chan said. But he did point to some theories.

For one, the foods people eat can affect the gut's "microbiome”—the huge collection of bacteria that dwell in the digestive tract. Some researchers suspect that the microbiome plays a role in diverticulitis, Chan said—though that's unproven for now.

There is also evidence that downing a lot of red meat helps fuel chronic, low-level inflammation in the body, Chan said. That, in turn, might raise the risk of diverticulitis.

Since the study focused on men, future research should look at whether the same patterns hold true for women, according to Chan.

But there's no biological reason to believe the findings would differ by sex, he said. Plus, women already have plenty of reasons to aim for a healthy diet, with limits on red meat, Chan said.

Sandon agreed. "The Dietary Guidelines for Americans recommend a mostly plant-based diet to promote health—and that includes colon health," she said. "Make half of your plate fruits and vegetables, choose whole grains, and vary your protein choices."