Today, Dec. 14, marks the anniversary of the tragic loss of children and teachers at Sandy Hook.

After any mass shooting, Americans hear politicians make the ritualistic call for “thoughts and prayers.” Yet years after the killing of these 20 elementary students and six staff, school shootings continue to frequently claim young lives, most recently in Oxford, Michigan. There have been more than 30 in the U.S. during 2021 alone – and more than 600 mass shootings of any kind, according to the Gun Violence Archive. The archive defines a mass shooting as an incident with four or more people injured or killed, not including the perpetrator.

Thoughts and prayers are not enough. As someone who specializes in youth studies, I would argue for a deeper exploration of the problem. A social-contextual analysis would examine how shooters’ shared characteristics interact with their surroundings to make them capable of the unimaginable acts they committed.

The Sandy Hook tragedy was part of a venomous chain: Aurora, Charleston, Orlando, Las Vegas, and other public mass killings. These repeated mass shooting-suicides that occur when troubled boys and men turn to guns are far too similar to one another.

After Sandy Hook, too many explanations described these horrible events as peculiar to a deranged individual or due to the sole factor of mental illness. An overly simplistic explanation of shooters as mentally ill is used as a diversionary political tactic against gun reform. This explanation is both terrifying – because the actions of someone like this killer can come out of nowhere – and comforting, in that we do not hold any obligation or responsibility.

These shooters have common factors. They were all men. In the case of Sandy Hook, Charleston and Des Moines, the shooters were white.

They apparently experienced a life of intense emotional pain. They demonstrated signs of a traumatic life, like severe social isolation, school or job failure or family estrangement.

But these shootings are symptoms of a deeper public health crisis that we are not talking about. Scholarship on mass shootings demonstrates a pattern for school shooters, in particular, in which the predominant understanding of masculinity combines with the cultural script of spectacular mass violence.

As sociologist Michael Kimmel found, most school suicide-murder shootings after 1990 have been carried out by white boys. Instead of exhibiting resilience or asking for help, some white boys who are bullied, under threat or disrespected turn to aggression and revenge as a toxic salve, using prior accounts of past shootings as a script for their own acts of suicidal mass violence.

This way of imagining manhood amplifies the worst messages our culture offers – that men should not demonstrate pain and vulnerability or seek help. Instead, a toxic masculinity emerges to put forth the idea that when white men are hurting, they are entitled to act violently against others to cover feelings of vulnerability.

The link between the taboo on white male vulnerability and toxic white male violence permeates everyday life. Boys are four times as likely as girls to think that everyday aggression, like cutting in line or fighting, is acceptable.

Often, debasing others’ humanity involves not guns but racist, sexist or homophobic components that are not seen as violent. The worst insults lobbed at vulnerable men are that they are feminine or gay. These ideas reside in the cultural ether, occasionally emerging in the form of ugly jokes, unwanted gropes or racist cartoons. Other men may inflict these values in ways that create pain but are not immediately lethal – think about sexual harassment or emotional abuse of wives or children.

Everyone is exposed to this cultural smog that sends men messages of unearned entitlement and superiority. Some damaging elements of white masculinity even feel normal and unremarkable, such as when a parent tells a boy child to stop “crying like a girl.” Many men live with this smog or actively resist it. But when mixed with pain or mental illness, these toxic elements can take a devastating turn. 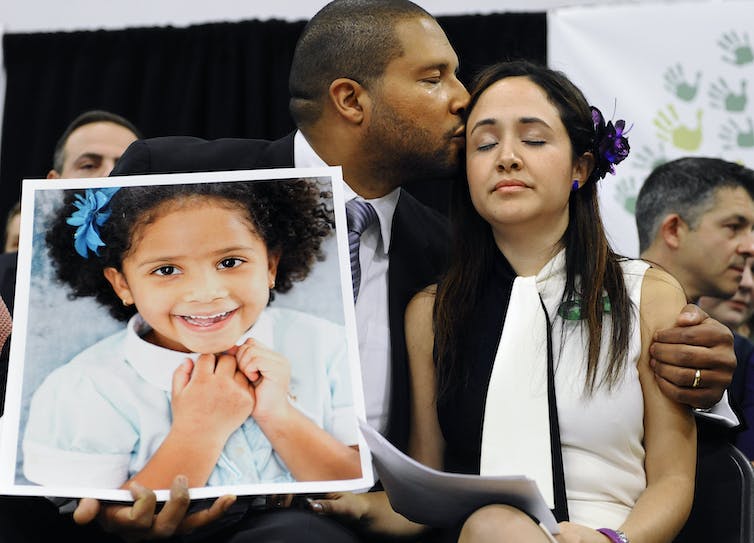 Parents of Ana Marquez-Greene, killed at Sandy Hook, hold a photo of their child.

Americans have repeatedly seen instances in which white boys who feel vulnerable descend into a horrific sequence of practices that look eerily familiar. The Sandy Hook shooter painstakingly collected stories of other mass shootings as he planned. The cultural script of committing violence against vulnerable others becomes a blueprint for boys to regain respectable masculinity.

This argument isn’t about condemning white men, or any men. Instead, I suggest that a public health crisis exists in which men suffer from undiagnosed depression and a lack of social connection, which are embedded in toxic masculinity. It’s about eliminating a cultural contaminant that provides terrible options for men to fall back on in tough times when they need to be able to treat their pain.

In acknowledging mass shootings as a cultural script and the limits of how we construct masculinity, we can begin to consider how to change it. Ideas about masculinity are transmitted through multiple channels – the family, media, entertainment, schools, college campuses, politics and the military – and we can interrupt it in these channels, too. White parents, for examples, can teach boys other definitions of how to “be a man,” ones that don’t see aggression as “natural.”

If we want to actually change the climate that is enabling these horrors, mourning rituals are not enough. We can push back at empty “thoughts and prayers” sentiments and support public figures who take responsibility for changing how we teach white boys what it means to be men.

While talking about how entitlement, racism and violence contaminate masculinity is a tough conversation, continuing to endure the consequences is even worse.

This is an updated version of an article originally published on Dec. 14, 2016.