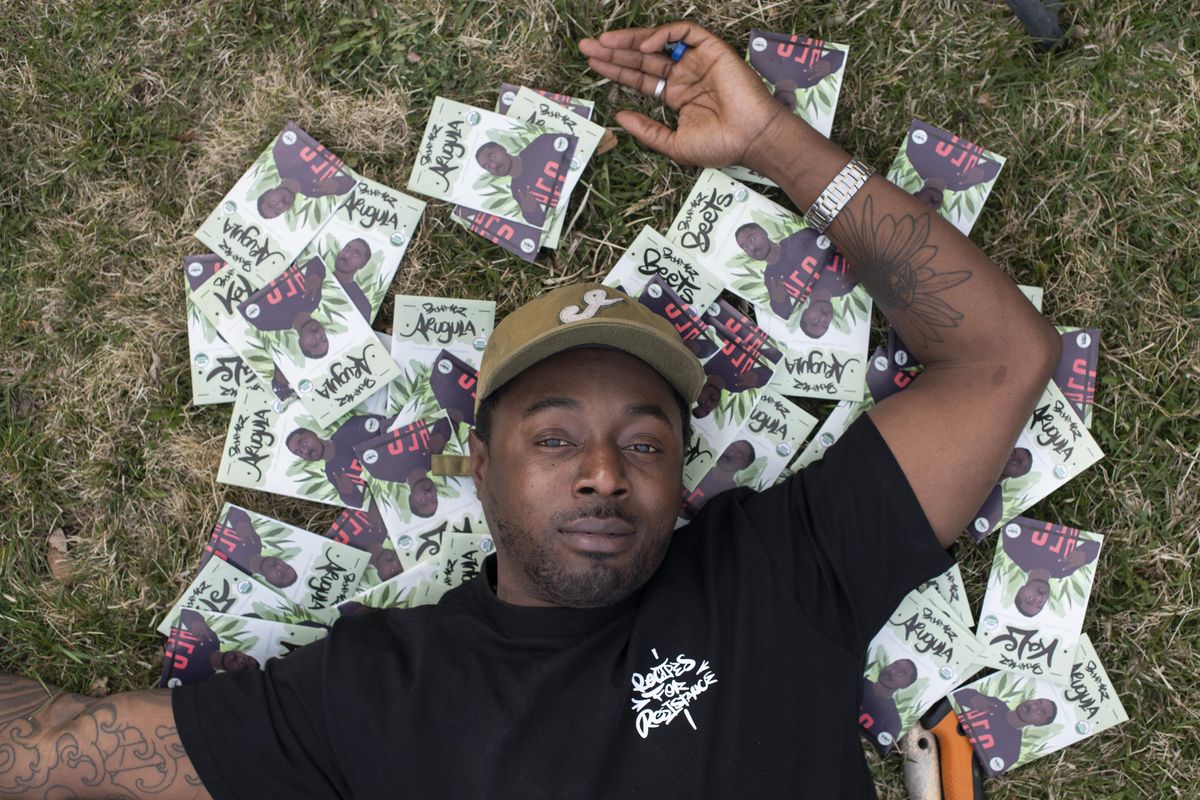 Ietef "DJ Cavem" Vita, a vegan rapper in the metro Denver area, encourages people of color to eat healthier by growing their own vegetables. He sells his own line of kale, beets and arugula seeds.

Gardening, or even viewing plants, can reduce stress and diminish feelings of fear, anger or sadness

DENVER — Ietef Vita had planned to spend most of 2020 on the road, promoting “Biomimicz," the album the rapper had released on his #plantbasedrecords label in January. Vita, known to his fans as “DJ Cavem Moetavation" and “Chef Ietef," had those plans unexpectedly cut short.

This story also ran on NPR. It can be republished for free.

“We were in Berkeley, California, on Feb. 29, playing there and literally got out of town right before they shut the whole country down," recalled Vita, 34, who has performed for the Obamas and is widely considered the father of what's known as eco-hip-hop. “It was scary."

Suddenly sidelined at his metro Denver home with his wife, Alkemia Earth, a plant-based-lifestyle coach, and three daughters, Vita struggled to pivot. Eventually, he accepted that he would need to stay put and, as the saying goes, bloom where he was planted.

With his wife's help, he launched an impromptu campaign: mailing out thousands of the more than 42,000 packets of kale, beet and arugula seeds he'd planned to sell at his shows, all emblazoned with his likeness and the QR code to hear his digital album. With the help of a crowdfunding campaign, he sent them at no cost to urban farmers anywhere and everywhere the couple could think of — Minneapolis, St. Louis, Cincinnati, Chicago, New York City, several parts of California and his hometown of Denver. He hoped the seeds might help alleviate the food shortages and long lines at grocery stores and food banks in economically disadvantaged communities hit hard during the pandemic.

His effort of putting out beets with his beats was a success. And, more than a year later, his seed business is still growing. Vita is among an expanding list of Black gardening enthusiasts-turned-entrepreneurs across the country. They run seed businesses that have benefited from the pandemic-inspired global gardening boom that seed providers, still overwhelmed with orders, hope won't subside anytime soon.

Gods Garden Girl, Coco and Seed, Urban Farms Garden Shop and I Grow Shit are all Black-owned companies that share in Vita's mission of drawing more diverse people into gardening and also illuminating it as an active, pandemic-safe pastime that facilitates healthy eating.

It also provides an escape from stress, including racial stress, which has simmered and exploded at times after George Floyd's murder in Minneapolis.

Research has found that exposure to plants and green spaces while gardening is beneficial to mental and physical health. In fact, a 2018 article in Clinical Medicine noted that merely viewing plants can reduce stress and diminish feelings of fear, anger or sadness by reducing blood pressure and pulse rate and also relieving muscle tension. The same report urged health professionals to encourage their patients to spend time in green spaces and to work in gardens.

Ietef "DJ Cavem" Vita, who has been called the father of eco-hip-hop, plants seeds with daughters Omolara LeaDonvita (center) and Libya LeaDonvita in the garden at their home just north of Denver.

Leah Penniman, a farmer and food activist in New York, wrote in her book “Farming While Black" that Black America's connection to seeds dates to the days of enslavement, when some Africans braided seeds into their hair when they were shipped away from home. It was, as Penniman wrote, “insurance for an uncertain future."

But many Black people in the U.S. have intentionally disconnected from farming since then because of its association with the painful legacy of slavery, said Natalie Baszile, author of a recently published anthology on African American farmers and the “Queen Sugar" novel that inspired the Oprah Winfrey Network TV drama centered on a Black family's Louisiana farm.

“Part of our cultural narrative has been to move away from the land, because moving away from the land represents progress," Baszile said. “The farther away you are from the land, the more successful you are. You go away to school, you get your education, you get another degree, you get a job in a field where you don't have your hands in the soil."

But Baszile, too, hopes the seed and gardening trend will inspire more Black people to see the health benefits of gardening.

“There is a therapeutic element to being outside planting, even if it's just a flower garden," she said. “There is something absolutely essential and healthy and meditative about getting outside doing something physical; you're moving your body, you are getting exercise, you're breathing clean air, you're connecting to the Earth."

And she said connecting to the soil empowers people, whether they are growing their own food or selling seeds as an entrepreneur.

The owner of Melanated Organic Seeds, Devona Stevenson, agrees. She said she initially took up gardening for relaxation in 2018 after a bout of depression. She then launched her seed business last June at the height of the pandemic, because she saw a need, even dating to her days growing up near Miami.

Rapper Ietef "DJ Cavem" Vita and his wife, Alkemia Earth, a plant-based lifestyle coach, launched an impromptu campaign during the pandemic when his concert tour was put on hold: They mailed out thousands of packets of kale, beet and arugula seeds across the country to both promote his album and help economically disadvantaged communities of color hit hard during the pandemic.

The owner of Melanated Organic Seeds, Devona Stevenson, agrees. She said she initially took up gardening for relaxation in 2018 after a bout of depression. She then launched her seed business last June at the height of the pandemic, because she saw a need, even dating to her days growing up near Miami.

“All I saw around me was fast food and people eating junk food from the corner store," said Stevenson, who is relocating from Fort Lauderdale, Florida, to nearly 2 acres in Fayetteville, Georgia. “I believe that representation matters. So, basically, I saw a need and decided to fill it. For me, it's also about reaching an untapped market, a group of people that have not really been marketed to, in terms of gardening and farming."

Her efforts are not going unnoticed. Stevenson said her list of Instagram followers has swelled from 7,000 to more than 20,000 since she began posting gardening tips last July. She said she believes many Black seed business owners like her are driven by the need for education and economic empowerment.

“My business is for all people — we're all human — but I happen to be a Black woman and a business owner, and if someone out there wants to support a Black-owned business, a Black gardening business, we provide them with that opportunity," she said.

Vita's entrepreneurial endeavor — “pushing seeds," as he calls it — seems to be having an impact, too. Online site Thrillist named him one of its “ Heroes of 2020" and Oscar-winning actor Natalie Portman included his “Sprout That Life" line, which runs about $19 for three packs of 55 to 100 seeds each, in her 2020 Top Gift Picks list in the December issue of People magazine. Actor Mark Ruffalo followed by publicly donating money to Vita's GoFundMe campaign that supported his seed distribution effort, prompting social media shoutouts from rapper Cardi B and comedian Cedric the Entertainer.

Vita is among a growing list of Black gardening enthusiasts-turned-entrepreneurs across the country who've launched seed businesses that have benefited from the pandemic-inspired gardening boom.

Vita said he sees the fruits of his efforts in the photos people send to him of the food grown from his seeds. He could not be prouder of how he is reaching communities of color, especially Black communities, who he said disproportionately live in food deserts and are plagued by health disparities. “I wanted to change the way that they're eating, let alone change the economic approach," he said.

To date, with crowdfunding support, he has distributed more than 20,000 of his seed packets free of charge. He said he hopes the effort, along with his online vegan cooking and gardening demonstrations, will help inspire more Black people to try a plant-based diet and spark, well, a growing movement.

“If we can flood our community with unhealthy food and drugs, I believe we can also flood it with seeds and love," he said. “We can flood it with positivity and urban farming and juice bars; without gentrification, without the urban renewal replacement."