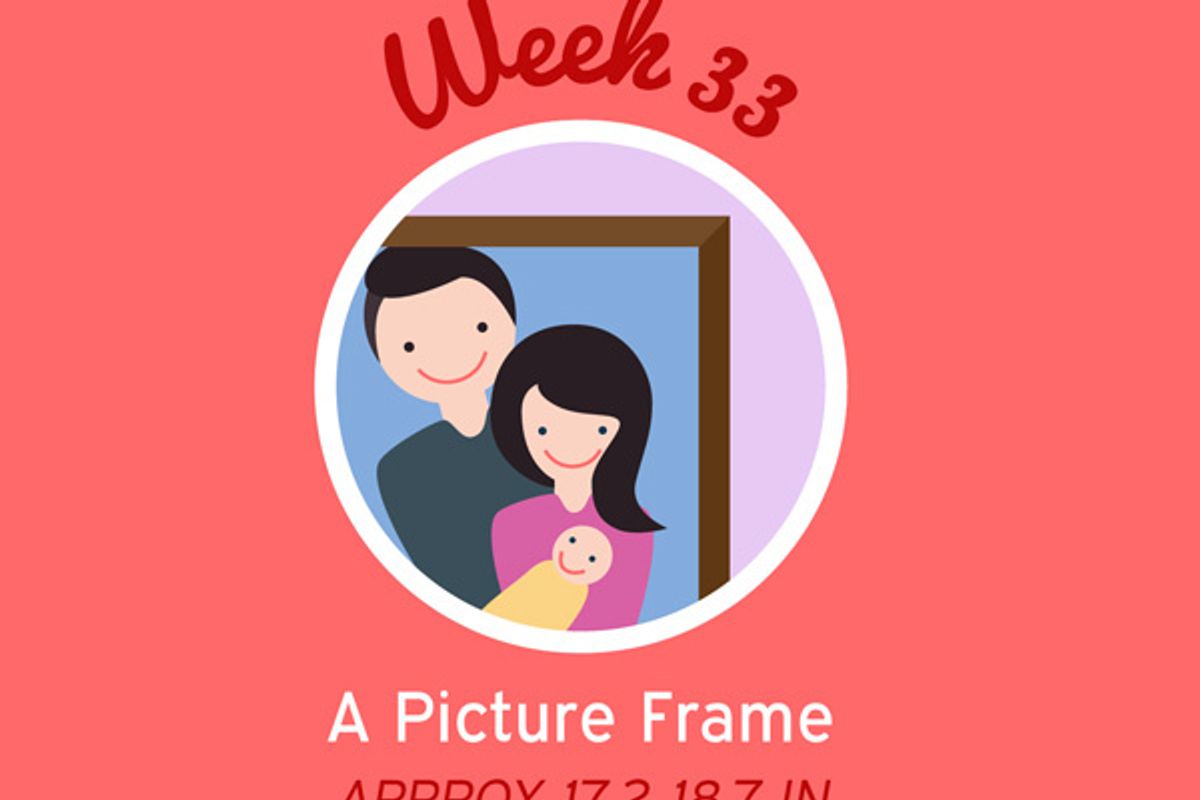 33 Weeks Pregnant: You May Start to Have Trouble Breathing

When you're 33 weeks pregnant, you're baby's no longer wrinkled and transparent.

During this week of pregnancy, your baby is about the length of an 18" picture frame and weighs about 4 pounds, which is roughly the weight of a pineapple. Moreover, he's no longer wrinkled and transparent. His fat and skin are developed enough that he looks more like a human baby and less like a giant raisin.

Tip of the week:
Difficulty breathing should go away within the next few weeks. To give your lungs and diaphragm a little more room right now, try taking a deep breath as you stretch your arms over your head. It may also help to sit with good posture during the day and sleep with an extra pillow under your head at night.

His bones are also getting good and strong during these final weeks, except, of course, for the plates in his skull, which will remain as separate plates until well after birth. During his trip down the birth canal, his head will need to be soft enough to make its way through the narrow passage. This means that afterward, he may have a slightly cone-shaped head, but that should go away within a week.

As he gets bigger, he may start to put some pressure on your lungs or diaphragm, potentially causing you to gasp for breath even when resting.

Usually around weeks 31 through 34 of pregnancy, the uterus shifts and presses on the flat muscle in the lower abdomen called the diaphragm, which helps push air out of the lungs. When it's compressed, it can't do its job efficiently and may result in your neck and chest muscles working overtime. Additionally, your growing baby may be putting pressure directly on your lungs, preventing them from fully expanding.

Many women experience shortness of breath during pregnancy, and it's usually not a problem. However, there are a few instances in which you should seek medical care. If you have a rapid pulse, heart palpitations, chest pain, a persistent cough, fever, chills or feel dizzy, it's a good idea to call your health care provider. Also, blue coloring in the lips, fingers or toes is a sign that you should call the doctor, as is worsening asthma.