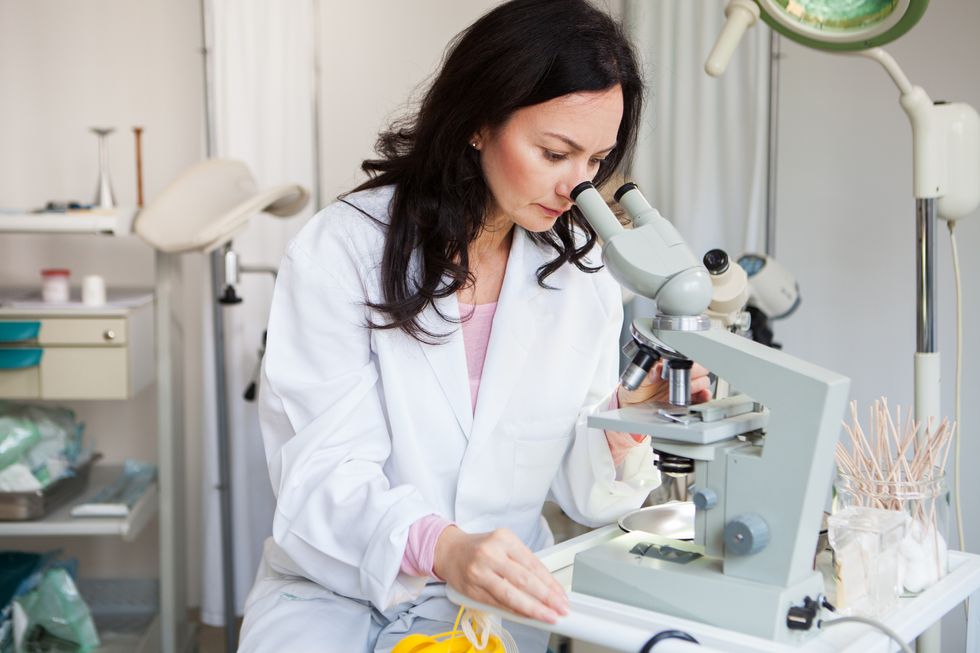 Some states are requiring insurance to pay for preserving eggs and sperm for young patients undergoing cancer chemotherapy so they have opportunities to have children later.

When Katherine Frega was diagnosed with Hodgkin lymphoma eight years ago at age 17, she was so sick that all she could focus on was starting chemotherapy to treat her aggressive blood cancer. It was her dad who thought to ask the oncologist, "How is this treatment going to affect her ability to have children?"

The oncologist discussed the risks but stressed that Frega needed to start treatment right away.

The question of fertility is often overlooked when young cancer patients are battling a life-threatening illness. And since health insurance doesn't typically cover fertility preservation care, patients and their families may be deterred by the cost.

But a growing number of states now require plans to cover such services when medically necessary treatment jeopardizes fertility.

Treatment for cancer and other serious conditions involves toxic chemotherapy drugs, radiation and surgery that can cause infertility in women and men.

The cost to freeze patients' healthy eggs, sperm or embryos for future use can be a major barrier, said Dr. Eden Cardozo, a reproductive endocrinologist and director of the fertility preservation program at the Women & Infants Fertility Center in Providence, R.I. Cardozo was instrumental in getting Rhode Island's law passed last year.

Reproductive health advocates argue that fertility preservation should be viewed as a core component of cancer care in younger people, not as an optional infertility offering. Some compare this type of coverage to the federal Women's Health and Cancer Rights Act, which requires plans that cover a patient's mastectomy to also provide for breast reconstruction.

New laws in Delaware, Illinois and Maryland require plans to include this benefit. The Delaware law applies to plans issued or renewed after June of this year; the requirement in the other two states starts in 2019. Connecticut and Rhode Island passed similar laws last year. New Jersey lawmakers are considering a bill, and advocates in New York plan to make another attempt after both legislative chambers passed fertility preservation bills in the last session but failed to reconcile them.

The state measures don't apply to companies that are self-funded, meaning they pay their employee claims directly rather than buying state-regulated insurance policies for that purpose. They also don't apply to government-funded programs such as Medicaid or the military's Tricare program.

Although freezing sperm and embryos has been common medical practice for decades, egg freezing was considered experimental by professional groups until 2012. As the technology has improved, the need for insurance coverage has grown, said Joyce Reinecke, executive director of the Alliance for Fertility Preservation, an advocacy group for cancer patients.

When Frega's cancer didn't respond to chemotherapy, her doctors recommended a bone marrow transplant in January 2012. Even if her eggs hadn't been damaged by the chemotherapy, the transplant would likely cause permanent infertility, she was told. So Frega took hormones to stimulate her ovaries to produce more eggs, among other things, and seven were retrieved during an outpatient procedure days before her transplant.

Frega's parents paid $10,000 for the medications and egg retrieval, a significant amount but less than what many pay. They were aided by Livestrong Fertility, a nonprofit group that provides access to discounted fertility preservation services for cancer patients who meet income guidelines.

Frega has good insurance through her mother's employer plan. "They covered everything else, except for this," she said. "They considered it not medically necessary."

Between 20 and 70 percent of cancer patients experience some degree of fertility impairment, according to Cardozo in Rhode Island. Though they make up the largest at-risk group, the complication isn't unique to cancer patients. People with other conditions such as lupus and rheumatoid arthritis who are treated with chemotherapy drugs may be affected, as may patients with conditions such as endometriosis who require surgery.

Despite the much-ballyhooed examples of tech companies like Facebook, Apple and Google that offer egg freezing as an employee perk, cryopreservation, as it's called, isn't a typical employee benefit.

Only 6 percent of large companies with 500 or more workers offer egg freezing for employees or their spouses, according to the 2017 annual employer survey by benefits consultant Mercer. About a quarter cover in vitro fertilization. Forty-four percent of large employers don't offer any infertility services, the survey found.

When Blake Hornbrook, an Army medic at Fort Campbell, Ky., had surgery to remove a cancerous testicle in the fall of 2015, he and his wife, Kelsey, were stationed in Germany. Hornbrook, then 26, looked into fertility preservation while overseas, but the annual storage fee of 1,000 euros (about $1,150) deterred the couple.

Hornbrook required a second surgery several months later to see if the cancer had spread to his lymph nodes. The couple returned to the United States and drove directly from the airport to a sperm bank in Fairfax, Va. It cost roughly $400 for the initial appointment to provide a sperm specimen and store it, Hornbrook said.

Tricare covered Hornbrook's cancer treatment, but it didn't pay for fertility preservation or for IVF, which he estimated cost the couple $6,500 in clinic fees. Tricare provided discounts on some of the fertility drugs.

Their daughter, Harper, was born seven months ago, and Hornbrook's cancer remains in remission.

For young cancer patients, the cost of storing the eggs or sperm that have been preserved can add up. Even if a state has a fertility preservation law, it typically doesn't cover those costs, Reinecke said.

Frega hopes to be able to conceive naturally and knowing she has frozen eggs available is "relieving, but also anxiety-producing," she said. If she can't get pregnant later on, she may have to pay $10,000 or more for IVF as well. "That's what lies ahead," she said.

Sixteen states require insurers to offer or cover infertility services to some extent, according to infertility advocacy organization Resolve. Requirements vary: Insurers may have to cover diagnosis or testing for infertility, for example, but not treatments like in vitro fertilization or fertility medications, said Barbara Collura, president and CEO of Resolve.

Typically, state infertility coverage laws require couples to try to get pregnant for a year or two before they're eligible for insurance coverage of IVF or other treatments.

That requirement makes little sense for patients trying to preserve their fertility before undergoing medically necessary cancer or other treatment.

"These people aren't infertile," said Collura. "They need to undergo some sort of intervention that is going to impair their future fertility, and what we say is that if it's medically necessary, they should have a right to have it covered."