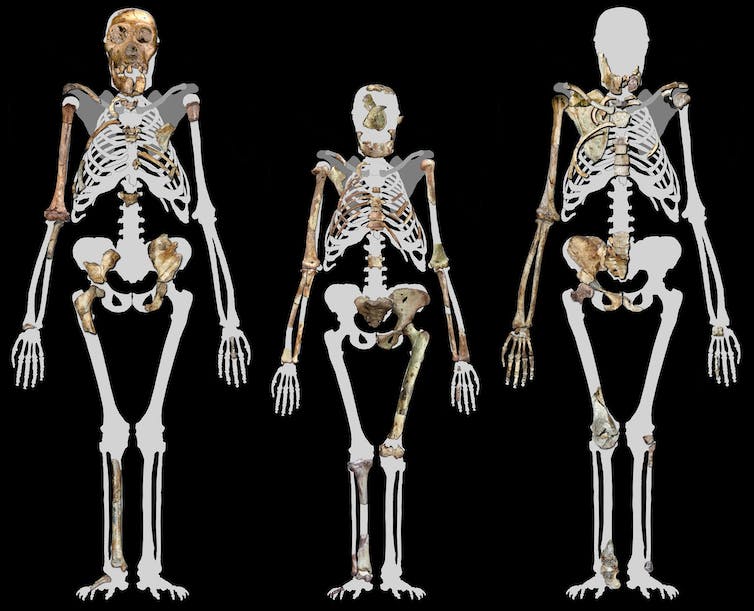 Curious Kids is a series for children of all ages. If you have a question you'd like an expert to answer, send it to CuriousKidsUS@theconversation.com.

When and how was walking invented? — Rayssa, 11, Newark, New Jersey

This is an important question because many anthropologists see bipedalism – which means walking on two legs – as one of the defining characteristics of “hominins," or modern humans, and their ancestors. It is difficult to give a simple answer, though, because bipedalism did not just appear one day. It went through a gradual evolution that began many millions of years ago.

Of course there are no video clips of the first person ever walking upright. So how do scientists try to answer questions about how people moved in the very ancient past? Luckily, the shape of a creature's bones and the way they fit together can tell the story of how that body moved when it was alive. And anthropologists can find other evidence in the landscape that indicates how ancient people walked.

In 1994, the first fossils of an unknown hominin were found in Ethiopia. The anthropologists who found the remains called the new discovery, an adult female individual, Ardipithecus ramidus, nicknamed “Ardi." Over the next 10 years, more than 100 fossils from Ardi's species were found and dated to between 4.2 million and 4.4 million years old.

When scientists examined this collection of bones, they identified certain characteristics that indicated bipedalism. The foot, for example, had a structure that allowed the kind of toe push-off that we have today, which four-legged apes do not have. The shape of the pelvic bones, how the legs were positioned under the pelvis and how the leg bones fit together all suggested upright walking too. It may be that Ardi did not walk exactly as we do today, but bipedalism as the normal way of movement does seem to be characteristic of these fossils from as early as 4.4 million years ago.

Anthropologists had already found the nearly 40%-complete skeleton of a hominin species that lived about a million years after Ardi, also in Ethiopia. Because of its similarity to other fossils found in southern and eastern Africa, they called it Australopithecus afarensis, which in Latin means “southern ape from the afar region." This individual was female, so they nicknamed it “Lucy" after a song by the Beatles that was popular at the time.

Many more fossils from this species – more than 300 individuals – have been added to the group, and today researchers know quite a lot about Lucy and her relatives. 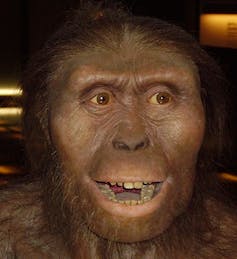 An image of a model based on Lucy and other Australopithecus afarensis skeleton fossils found in East Africa in 1974.

Lucy had a partial but well-preserved pelvis, which was how anthropologists knew she was female. The pelvis and upper leg bones fit together in a way that showed she walked upright on two legs. No feet bones were preserved, but later discoveries of A. afarensis do include feet and indicate bipedal walking as well.

In addition to fossil remains, scientists found other remarkable evidence for how Lucy's species moved at the Laetoli site in Tanzania. Beneath a layer of volcanic ash dating to 3.6 million years ago, anthropologists found fossilized footprints in what had once been a wet surface of volcanic ash. The tracks go along for almost 100 feet, and 70 individual prints indicate the presence of at least three individuals walking upright on two feet. Given the presumed age, the makers were likely Australopithecus afarensis.

The tracks prove that these hominins walked on two legs, but the gait seems to be a bit different from ours today. Still, Laetoli provides solid evidence for bipedalism 3.5 million years ago.

A hominin whose anatomy was so like our own that we can say it walked as we do did not appear in Africa until 1.8 million years ago. Homo erectus was the first to have the long legs and shorter arms that would have made it possible to walk, run and move about Earth's landscapes as we do today. Homo erectus also had a much larger brain than did earlier bipedal hominins and made and used stone tools called Acheulean implements. Anthropologists consider Homo erectus our close relative and an early member of our own genus, Homo.

So, as you can see, human walking took a very long time to develop. It appeared in Africa more than 4.4 million years ago, long before tool-making appeared.

Why did hominins walk upright? Perhaps it allowed them to see predators more easily, or to run faster, or maybe the environment changed and there were fewer trees to climb as earlier hominins did.

In any case, humans and their ancestors began to walk very early in their evolutionary history. Even though bipedalism came before tool-making, an upright posture freed the hands to make and use tools, which ultimately became one of the hallmarks of humans like us.

Hello, curious kids! Do you have a question you'd like an expert to answer? Ask an adult to send your question to CuriousKidsUS@theconversation.com. Please tell us your name, age and the city where you live.

And since curiosity has no age limit – adults, let us know what you're wondering, too. We won't be able to answer every question, but we will do our best.