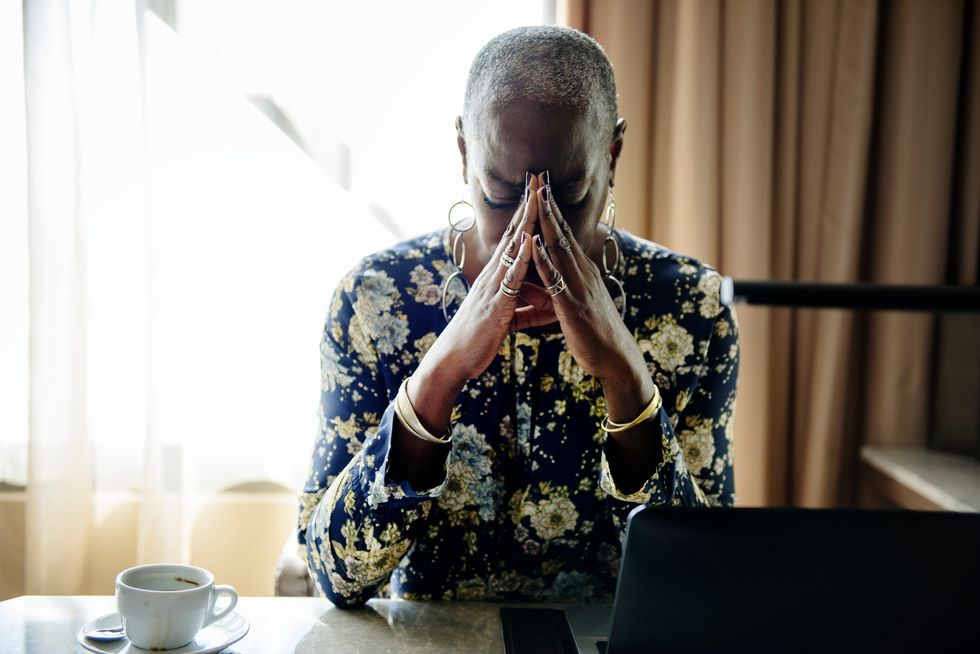 Many women going through perimenopause and menopause experience frequent panic attacks, likely connected to fluctuating hormones. The panic attacks can hit unexpectedly and at any time.

Your hands tremble, your chest heaves, you're sweating and clammy and feel like you're having nervous breakdown or a heart attack. You feel out of control and detached from the world. (Keep in mind that chest pain from a panic attack usually feels like a sharp or stabbing, localized pain in the mid-chest area, while pain from a heart attack is usually a pressure or squeezing sensation that can radiate outward to the jaw, shoulder blades or arm.)

But that sudden and intense sense of doom could be a panic attack—especially if you're going through menopause. And you're not alone. Plenty of women, around their menopausal years, are along for the (unpleasant) ride on that bumpy roller coaster chock full of emotion.

Panic attacks hit unexpectedly and at any time—when you're at the mall, watching television, in the middle of a business meeting, while driving, and even when you're sleeping.

Learn more about Signs of a Panic Attack.

The likely culprit for this surge of adrenalin, your body's "flight-or-fight" response against danger (only this time, there is none)? Fluctuating levels of estrogen and progesterone.

And when you consider that menopause ushers in other life changes that can make you more prone to developing panic attacks—like sleep problems, worries about body image, changing relationships, loss of fertility and an overall decreased sense of well-being—it's no wonder that so many women suffer from them around this time. If you were prone to anxiety in the past or experienced PMS or postpartum depression, then you might be more likely to develop panic attacks during the menopause years.

Panic attacks can be frustrating for many reasons, one being that they can be tough to diagnose, as many symptoms of panic attacks (like anxiety, sweating and palpitations) already mirror the ones that you might be experiencing during perimenopause or menopause.

And although many experts agree that once your hormones level out and your life gets in order you'll get relief, when you're the one going through it you're hesitant to believe that dribble—and you swear they'll never end.

But they will. Here's how to cope in the meantime, when those 10 to 30 minutes of awfulness feel like 10 to 30 hours of hell.

Know that you will be OK. "No one ever died from a panic attack," says Sanam Hafeez, PsyD, a New York City-based psychologist and teaching faculty member at Columbia University Teacher's College. You may feel like you want to, or might, die, but, "It simply won't happen," she says.

Consider making lifestyle changes. Gisele Bündchen (who recently revealed she suffered extreme panic attacks) said they subsided when she made lifestyle changes like cutting down on her drinking and smoking; incorporating meditation and yoga and cutting out sugar. If you don't already do it, eat a healthful diet full of lots of fruits and veggies, avoid alcohol and reduce your consumption of caffeine.

Get enough sleep. "Just how the bleep do I do that?" you might be yelling right now, especially if you are dealing with night sweats and the like. Before you panic, refer to item number 2 here.

Know that there are treatments. If you can't handle them on your own, your health care professional may treat your panic attacks with hormone therapy and other treatments for menopause symptoms, plus medication for anxiety, says the Cleveland Clinic. Psychotherapy can also help treat your psychological symptoms. "Cognitive behavior therapy, which challenges fearful thoughts, is an effective, lasting treatment for controlling panic attack symptoms," says Dr. Hafeez.

Get regular physical activity. Personally, this is my treatment of choice for just about everything, but it does help to lower anxiety, which may play a contributing role in panic attacks. Yoga, stretching and other relaxation techniques can help someone get through an attack while it's happening.

Just like hot flashes and night sweats, panic attacks during menopause will pass. In the meantime, show some self-care and self-compassion and, hopefully, relief will follow.