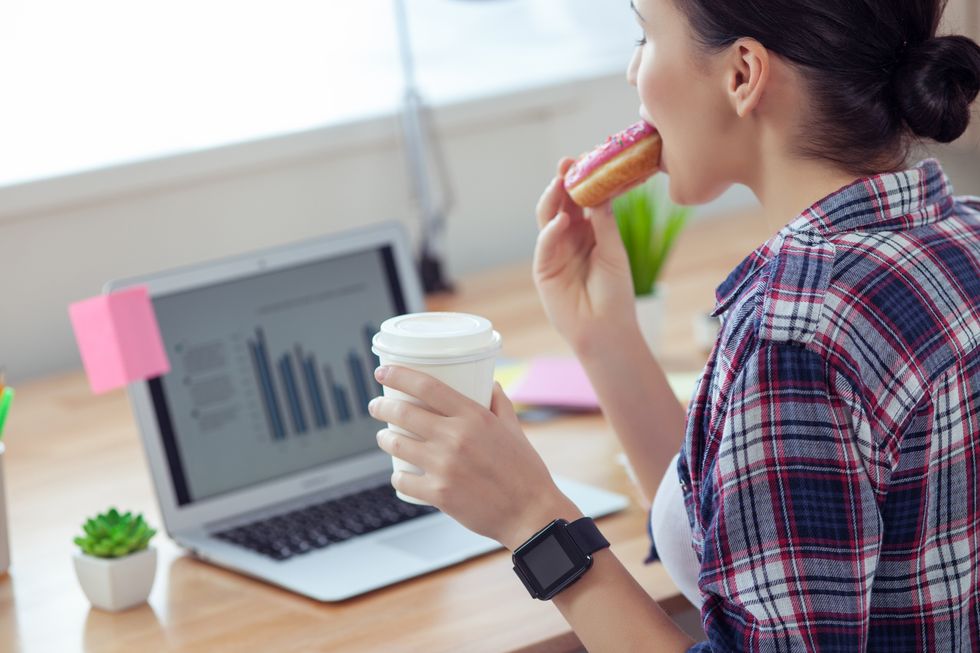 Is Your Workplace Making You Fat?

Is Your Workplace Making You Fat?

A new federal government survey found that about one-quarter of Americans "acquire" nearly 1,300 calories at work every week.

MONDAY, June 11, 2018 (HealthDay News) -- The dilemma is all too familiar: It's Monday morning, you walk into your office and see that someone has left a big box of donuts in the break room. Then, your co-worker tells you there will be cake later for yet another birthday celebration.

READ: Why Am I Gaining Weight?

One thing's for sure. You're not alone. A new federal government survey found that about one-quarter of Americans "acquire" nearly 1,300 calories at work every week. Even worse, the survey only included foods people didn't bring to work themselves, and food they didn't purchase from outside vendors.

"The majority of the calories people got at work, people didn't pay for -- 70 percent of the calories were free," said study co-author Stephen Onufrak, an epidemiologist at the U.S. Centers for Disease Control and Prevention.

The food and beverages that were most commonly obtained at work, he said, were:

When the researchers looked at the foods by calories, pizza was the leading source of calories obtained at work, followed by sandwiches and regular soft drinks.

Onufrak said the foods obtained at work might have been lunch -- some workplaces did have onsite cafeterias and foods purchased at an employee cafeteria were included in the survey.

The study included more than 5,200 people from a nationally representative group that completed a U.S. Department of Agriculture survey in 2012 and 2013. The volunteers answered questions about the foods they obtained at work over a seven-day period. They only reported food they acquired at work, and they didn't say whether or not they ate the foods.

Onufrak said the survey didn't ask about what people ate at home, so it's hard to know for sure if they continued eating foods that were high in refined sugar, salt and empty calories once they left the office. But he said that based on other research he's done, "a lot of the eating patterns we saw tend to be consistent."

The findings show that employers have an opportunity to improve their workers' health, he said.

Nutritionist Samantha Heller noted that offering healthy fare could provide a benefit to employers, because employees who eat well "will feel better, will have more energy and can focus better."

Heller, who's with NYU Langone Medical Center in New York City, added, "When we feed our bodies well, our bodies and brains respond. It's a win-win for the company and the employees."

But what if your workplace doesn't offer healthy options? The best option may be to bring your own lunch, Heller suggested. That way, you're in charge of what foods are available to you, and it saves you money.

If you don't bring your own lunch, she said, you should do some scouting to see what healthy food choices are available around your workplace. And it's a good idea to do this when you aren't hungry.

And what about all those free sweets at work?

"People bring a lot of treats to work. People like to feed each other to show affection. But it's OK to say no to the birthday cake or the brownies. It's always going to be somebody's birthday or another celebration. Decide ahead of time that you're going to say no to treats at work," Heller advised.

Onufrak is scheduled to present the findings on Monday at the American Society for Nutrition annual meeting, in Boston. Research presented at meetings is considered preliminary until published in a peer-reviewed journal.