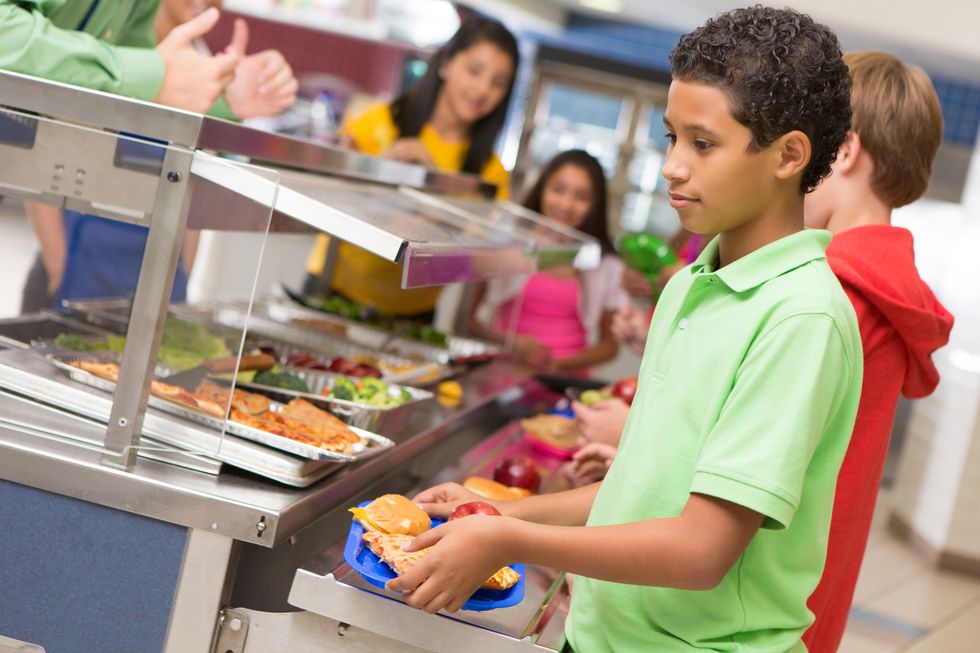 The Trump administration announced on Monday that it will ease the requirements for healthy school lunch programs.

U.S. Secretary of Agriculture Sonny Perdue said his department wants to provide school systems with more flexibility in "nutrition requirements for school meal programs in order to make food choices both healthful and appealing to students."

Specifically, the changes on the way regard whole grains, salt and milk.

For example, under the revised rules, schools will be allowed to opt out of providing whole grains in meals through 2018.

And meals might get saltier, too: Based on Obama-era guidelines, through 2020, schools were targeted at roughly 1,000 milligrams of salt per school meal (for reference, there's about 2,300 milligrams of sodium in a teaspoon of salt).

Under the new USDA rules, schools would have the flexibility to raise salt-per-meal intake to somewhat higher levels.

As for milk, 1 percent chocolate milk is now back on the menu at school breakfasts and lunches, the USDA said.

According to an agency news release, Perdue called the changes "the result of years of feedback from students, schools and food service experts about the challenges they are facing in meeting the final regulations for school meals."

He cited anecdotal accounts from schools, where fruits and vegetables wound up in the trash or kids refused to eat whole grains and other healthy food choices.

"If kids aren't eating the food, and it's ending up in the trash, they aren't getting any nutrition—thus undermining the intent of the program," Perdue said.

"A perfect example is in the south, where the schools want to serve grits. But the whole grain variety has little black flakes in it, and the kids won't eat it," Perdue said. "The school is compliant with the whole grain requirements, but no one is eating the grits. That doesn't make any sense."

But health experts aren't applauding the USDA moves. One saw the changes as a step backward for a school meals program that's been a success.

"USDA needs to remember that schools around the country are making great progress on healthy school meals, with more than 99 percent of schools already in compliance," American Heart Association CEO Nancy Brown said in a statement. "Improving children's health should be a top priority for the USDA, and serving more nutritious foods in schools is a clear-cut way to accomplish this goal."

"Rather than altering the current path forward, we hope the agency focuses more on providing technical assistance that can help schools get across the finish line, if they haven't done so already," Brown added.

But Perdue and the USDA took a different view, saying Obama-era programs have placed an unsustainable financial burden on schools.

Schools have been finding it hard to afford providing meals while sticking to "existing, stringent nutrition requirements," the agency said.

According to the USDA news release, those requirements cost school districts and states an additional $1.2 billion in 2015.

And as costs rise, most states are finding that fewer kids are eating lunches provided in schools—about 1 million students have opted not to have school lunch every day, the USDA said.

This decline means schools are not taking in as much money at the same time costs are rising, the agency said.

Nutritionists differed in their responses to the new changes.

"This is a backward move for the health, well-being and support for academic success of our nation's youth," said Pamela Koch. She directs the Tisch Center for Food, Education and Policy at the Teachers College of Columbia University, in New York City.

"Dietary change takes time and exposure. Why would we turn back now, just as our nation's school students are embracing healthier meals?" she said.

Connie Diekman directs university nutrition at Washington University in St. Louis. She said that flexibility in achieving change in school lunches is a laudable goal, since all school districts are different.

"Teaching children about healthier eating through school lunch is an excellent way to help them change," Diekman said. "And therefore I hope that USDA, and Congress, remain focused on meeting the guidelines set forth in the 2015 Dietary Guidelines."

The changes announced Monday will allow districts to adjust to meet the needs of those districts, she said, "but hopefully they will not derail the ultimate goal of providing our children healthier school lunch meals."

Perdue, however, sees these changes not so much in terms of health, but rather as moving power back to local schools.

"It means that this new flexibility will give schools and states the option of doing what we're laying out here today," he said. "These are not mandates on schools."

But one nutritionist also suspects the food industry may have had a role to play in the new rules.

"This administration's actions are directed by the food industry with no regard for the health and well-being of Americans," she said.

Whatever the outcome, Diekman said changes made to kids' diets now can impact the health, and medical budgets, of Americans for years to come.

"Eating behaviors established in childhood lay the foundation for eating habits throughout life, and of course for health," she said.