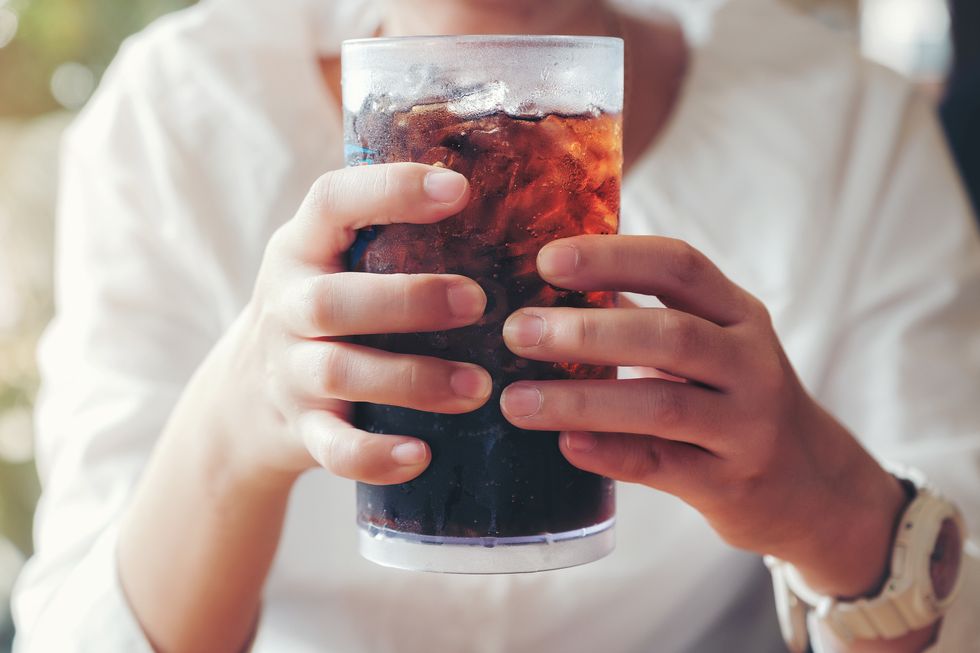 When you consider the amount of sugar in coke, is this really that much of a surprise?

HealthDay News -- It's long been known that sugary drinks help people pack on unwanted pounds. But new research suggests that sweetened sodas, sports drinks and even 100% fruit juice might raise your risk for some cancers.

READ: Signs You Have a Sugar Addiction

The study couldn't prove cause and effect, but it found that drinking as little as 3 to 4 ounces of sugary drinks each day was tied to an 18% rise in overall risk for cancer.

Among women, a similar consumption level was tied to a 22% rise in breast cancer risk, the French research team found.

A spokesperson for the American Cancer Society (ACS) said the findings should give consumers pause, because obesity is a known risk factor for cancer.

"A lot of the research on sugar-sweetened drinks and cancer has been tied to obesity," noted Colleen Doyle, managing director of nutrition and physical activity at the ACS. "Across the board, it's a good idea to reduce any sugar-sweetened beverage," she advised.

The new study was led by Mathilde Touvier, research director of nutritional epidemiology at the University of Paris. Her team collected data on more than 100,000 French men and women, average age 42, who took part in a national study.

The participants answered questions about how much of 3,300 different foods and beverages they consumed each day, and were followed for up to nine years (from 2009 to 2018).

The study uncovered links between the consumption of sugary drinks and the risk of cancer in general, and for breast cancer specifically. The investigators found no association between sugary drinks and prostate or colon cancers, but the authors stressed that too few people in the study developed these cancers to make this finding definitive.

The research uncovered no links between diet sodas and other artificially sweetened beverages and cancer, although more study is needed to confirm that, the authors noted.

The connection between sugary drinks and cancer remained the same even after the team adjusted for age, sex, educational level, family history of cancer, smoking and physical activity, the researchers said.

So, why the connection? According to Touvier's team, high-calorie drinks may raise cancer risk because sugar helps build body fat, in addition to raising blood sugar levels and inflammation -- all of which are risk factors for cancer.

It's also possible that chemicals found in these drinks might play a part in increasing cancer risk, the researchers theorized.

A group representing the beverage industry said sugary drinks can still be a part of the average diet, however.

In a statement, the American Beverage Association said: "It's important for people to know that all beverages -- either with sugar or without -- are safe to consume as part of a balanced diet. America's leading beverage companies are working together to support consumers' efforts to reduce the sugar they consume from our beverages by providing more choices with less sugar or zero sugar, smaller package sizes and clear calorie information right up front."

Samantha Heller is a senior clinical nutritionist at NYU Langone Medical Center in New York City. She said she wasn't surprised by the findings.

"Do we really need more evidence that consuming sugar-sweetened beverages regularly is not healthy?" Heller said. She noted that, for decades, these drinks have been linked with diseases such as obesity, type 2 diabetes and heart disease.

On the other hand, "most of us should be drinking more water than we do," Heller said. "Being poorly hydrated can affect us in surprising ways. It can impair our driving skills, cognitive abilities, mood, energy levels, kidneys, gastrointestinal function, appearance and more."

"The only beverage that is recommended is water," she said. And Touvier supports public efforts to get people away from the soda-and-juices habit.

And water doesn't have to be boring, Heller added.

"Play around with infusing water with mint, basil, cucumber, or strawberry and lemon slices. Fill a pitcher with water and pop in your favorite herbal teas like berry, vanilla or peppermint, and chill in the refrigerator," she suggested.

The new report was published online July 10 in the BMJ.