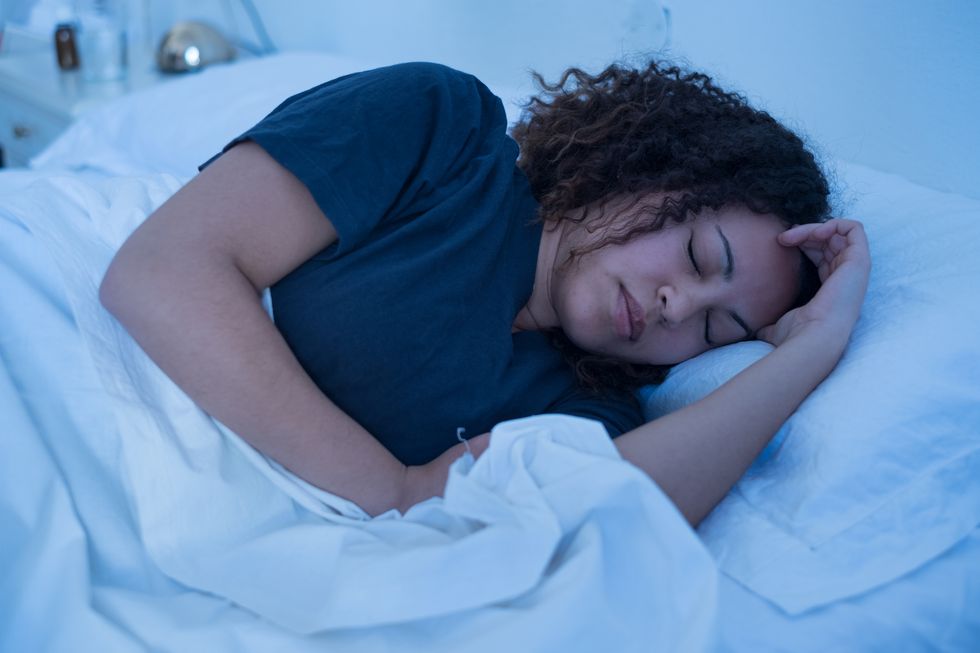 Sleeplessness could cost you when it's time to stand on your bathroom scale, a new British study suggests.

WEDNESDAY, Jan. 17, 2018 (HealthDay News)—Sleeplessness could cost you when it's time to stand on your bathroom scale, a new British study suggests.

People plagued by insomnia who began sleeping more cut the amount of sugary foods they tended to eat, an experiment at King's College London revealed.

"We really need to be looking at sleep as one of these lifestyle factors that can contribute to obesity," said Lauri Wright. She's an assistant professor of nutrition at the University of North Florida and a spokeswoman for the Academy of Nutrition and Dietetics.

For the study, researchers led by Wendy Hall, from the department of nutritional sciences at King's College, recruited 42 people who habitually got less than seven hours of sleep a night.

Half of the people received a 45-minute personalized sleep consultation, which provided them with tips to improve their sleep. The goal was to extend their sleep by as much as an hour and a half each night. The other half received no advice and served as the control group.

All participants were equipped with a wrist-worn motion sensor that kept track of how much they slept each night, as well as the amount of time they spent in bed before falling asleep. They also kept food diaries to track what they ate. Sleep and diet were monitored for a week.

Nearly 9 in 10 of the people who received advice increased their sleep time during the week, anywhere from 52 minutes to about an hour and a half. No significant changes in sleep patterns occurred among those in the control group.

Those folks who got more sleep wound up with a 10-gram reduction in their daily intake of added sugars, the researchers found.

That's not a huge amount of added sugar, only about 2 teaspoons, or 38 calories, Wright said.

But over time those added sugars can add up, especially if sleeplessness also keeps a person from being more active in their daily life, Wright said.

"When you're tired, you aren't going to have the energy to be physically active to go to the gym or go for a walk," Wright explained.

There are a number of different ways sleeplessness could influence a person's food choices, sleep experts said.

A hunger-dampening hormone called leptin is secreted when people enter the deeper stages of sleep, said Dr. Rajkumar Dasgupta, an assistant professor of clinical medicine at the University of Southern California's Keck School of Medicine.

A lack of sleep could mean that people's appetites are instead being driven by ghrelin, which is known as the "hunger hormone," Dasgupta explained.

"Because they may not be getting into the deeper states of sleep, they're experiencing a dysregulation of the important hormones related to hunger," Dasgupta said.

People with insomnia also tend to develop a lack of inhibition due to their sleeplessness, said Dr. Andrew Varga, an assistant professor of sleep medicine at the Icahn School of Medicine at Mount Sinai in New York City.

"It just becomes harder to resist certain foods and other things you ordinarily would know you shouldn't indulge in," Varga said. "You're more likely to act on your base impulses."

Dasgupta agreed. "Let's face it, when I'm up late snacking, I'm not grabbing the [water] and the celery sticks," he said, noting people will more likely opt for junk foods and snacks.

However, Varga said there are some potential limitations to the new study.

The problem is that insomniacs "will lie in bed awake," Varga said. The device "is picking up motionlessness that would be interpreted as sleep, but actually the person is laying there wide awake, counting sheep in their head."

Sleep experts said the advice provided to participants in this study should help anyone suffering from insomnia.

Just keep in mind that what works is going to vary from person to person, Dasgupta noted.

"Sleep is not simple. Sleep is a puzzle," he said. "With each person with insomnia, there are different pieces to the puzzle."

The study was published recently in the American Journal of Clinical Nutrition.