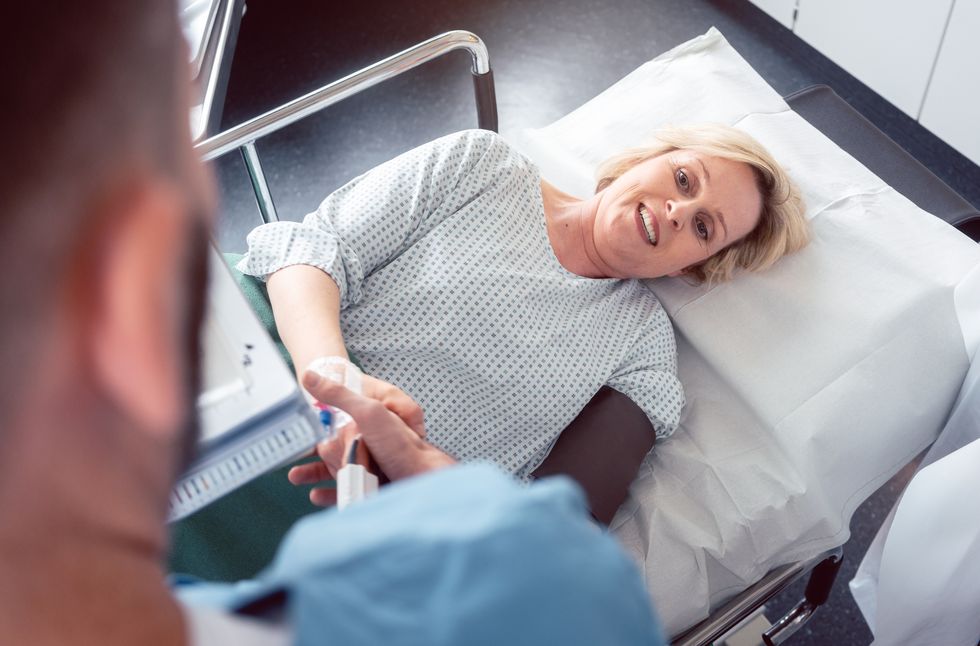 The Silver Lining to Getting a Colonoscopy Is Reading This No B.S. Survival Guide

That dreaded doctor visit is not fun—but reading this prep manual by award-winning humorist Mary Kay Jordan Fleming is.

I may be the only lunatic on Earth who wants to have a colonoscopy more, rather than less, often.

I've had routine screening every few years for nearly 20 years. My gastroenterologist is a very nice man, and he sings to me before each procedure, but that's not why I go so often. My grandmother had colon cancer, my mom died from it 40 years ago, and I've had polyps. So now, every few years, my doctor repeats the intestinal safari and hunts for more.

If you decide to take this wild ride, and I hope you will, here's what you can expect. About a month ahead of time, you'll receive lengthy instructions about the preparation and procedure. Don't be like me and put this off until three days beforehand because you might be caught shoveling in a handful of chocolate-covered almonds only to read the prohibition against eating seeds or nuts for the prior week. Oops.

The instructions call for a clear-liquid diet for two days prior to the colonoscopy. Make your shopping list and hurry over to the grocery store to buy all the prescribed supplies, in my case: one jumbo bottle of Miralax; Gas-X tablets, which will not be up to the task but buy them anyway; Dulcolax stool softener; clear juices and soup broths; and not one morsel of anything anyone in their right mind would ever ingest. The contents of your shopping cart will be a dead giveaway that a Nuclear Cleanse is imminent, so throw a jacket over the whole thing and slink up to the cashier who is wearing a knowing smirk. Avoid eye contact with the cashier and any candy in the checkout lane during this transaction.

My grandmother had colon cancer, my mom died from it 40 years ago, and I've had polyps.

On Day T-minus two, begin the clear liquid diet that will make you hate everyone who has ever eaten solid foods. Suck on an apple juice box through a baby straw and look longingly at toddlers who are drinking fresh orange juice with real pulp. Wow, would pulp ever taste delicious right about now.

Now it's Day T-minus one, and my preparation calls for eight doses of Miralax dissolved in jumbo vats of clear liquids from 4:00-6:00 p.m. Clear a path to the bathroom and warn other family members to save themselves and just get out for two days. In between bathroom visits, vow to strangle your spouse for buying cheap-ass toilet paper. Seriously, would it have killed him to find something cushiony, perhaps something in a nice cashmere or silk?

Into the Bathroom (Again)

Now things are really starting to move. The only states of matter are gas and liquid; there are no solids, perhaps ever again. Call your husband, who has taken refuge in a treehouse down the street, and demand that he buy toilet paper made of newborn vicuna. Money is no object. Take a peek at email in the nanoseconds between bathroom visits to find that your laptop has randomly selected a photo of a geyser for your screensaver. Even Microsoft is in on the joke now.

Following several moments of solid sleep (God knows nothing else is solid) during the night, rise at 4:00 a.m. on the Big Day to resume Miralax doses every 15 minutes for two hours. Then, just when you would swear you've lost one-fourth your body weight, haul your weak, empty carcass to the gastroenterologist's office for your appointment. Perhaps on the drive, you'll get lucky like I did and spot an enormous Chrysler truck in front of you at the last stop sign. Black, with huge silver letters plastered across the tailgate: RAM. Just in case you forgot the purpose of today's procedure.

What to Expect During a Colonoscopy: Fear and Loathing at the Doctor's Office

When you arrive at the doctor's office, an unnecessarily cheerful clerk who has been eating solid foods for the past several days will require you to show a driver's license for identification. This protects you from the onslaught of strangers who break into gastroenterology offices and try to take other people's colonoscopies. A very nice nurse who reeks of bacon will ask whether you're "all cleaned out."

Don't be afraid to admit that you may have passed your own colon during the night. Another nurse will start an IV so that you can be blissfully unaware that people will be inserting rubber hoses and cameras into areas of your body you've never seen and sincerely wish they didn't need to.

Now comes the moment you've been waiting for. And it's nothing, thanks to the marvels of modern anesthesia. Quick, easy, painless—why were you ever afraid? The procedure is a breeze, and maybe quite a few breezes for the rest of the day, despite all those Gas-X gel caps.

After my colonoscopy, the doctor visits me in the recovery room and tells me that he removed several wild polyps and would see me again in three years. In my post-anesthesia twilight, I declare my love for him, just as I have done every three years for the past 20 years. I want to hug him, but I resist. I'm not wearing pants.

Ready to See Your Doctor but Scared to Go? Here Are Some Guidelines

Don't Postpone These Types of Preventive Care Due to Coronavirus

Tips for a Better Colonoscopy