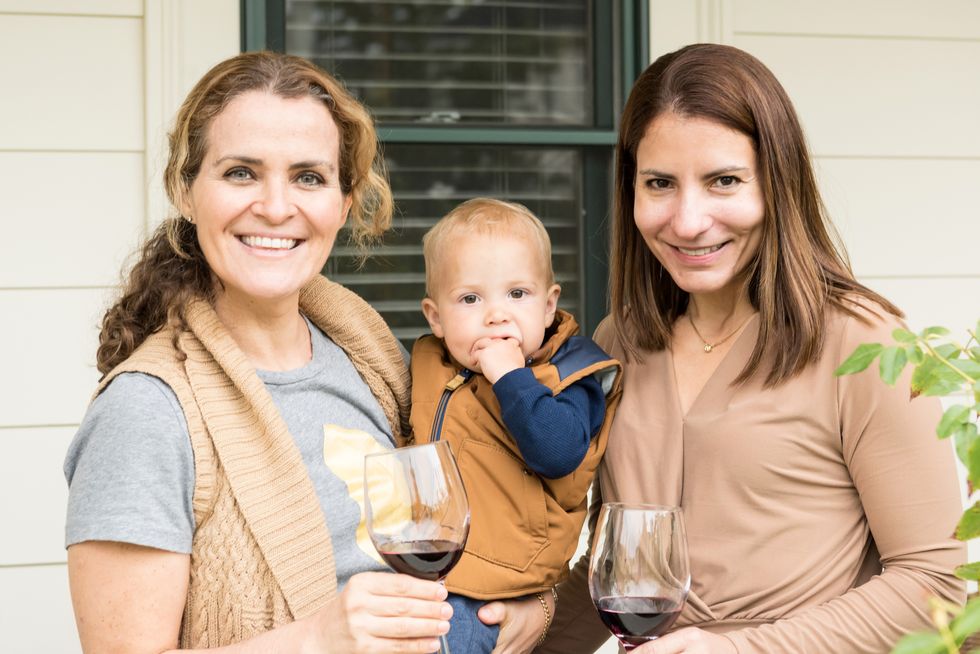 Moms are hitting the bottle with growing frequency, making it seem more normal. But is it? What are the dangers to moms and their children?

It's the end of the day and time to unwind and relax after many busy, demanding, hectic hours.

Work is tough, and motherhood is one kind of work that can render even the strongest among us weak and depleted.

But those notorious phrases—"It's five-o'clock somewhere," "It's wine-o'clock," or whatever the shorthand is for "I've-had-a-long-day-and-the-kids-are-stressing-me-out"—take on a whole different meaning when there's a child involved.

Moms are taking to the bottle with growing frequency: The number of women who consumed more than four drinks a day rose by about 60 percent between 2002 and 2013, reports the National Epidemiologic Survey on Alcohol and Related Conditions. And women whose drinking habits are problematic enough to fall into the category of alcohol use disorders (which indicates problem drinking) increased by a whopping 84 percent.

Somewhere along the way, the desire to drink has grown, along with its seeming normality. Because, after all, a stressed-out mom deserves it. Right?

Sarah Cottrell, a mom of three who admits to getting a bit carried away with her wine consumption, which typically began when her second-grader got off the bus and ended after 10 p.m. when her husband joined her on the couch to top off her glass, writes on Babble:

What's happening here? Is it a case of mothers giving themselves "permission" to drink because of the demands of child-rearing? As in, "I've given so much of myself to my children today—now it's my time?" T-shirts and coffee mugs are emblazoned with catchy, cutesy phrases like, "Mommy drinks wine and swears," "Mom's fuel," and, "They whine while I wine."

The concept is hardly new. In the 1950s and '60s, tranquilizers were the go-to treatment, nicknamed mother's little helper for a reason. They were widely prescribed by doctors seeking to help the harried masses of mothers yearning for relief from stress and anxiety.

Self-care is so very important, especially for mothers, whose resources can become strained and depleted. We need to replenish our "empty tanks" to allow us to run at full steam. We need to nurture ourselves to be available to nurture others, especially our children, who need major doses of nurturing.

But, filling the tank with alcohol can be a dangerous, loaded mix of harmful ingredients. Drinking to fit in with the culture of harried, overworked moms has a way of "normalizing" drinking. Sometimes it's tough to get away from it. And it can lead to trouble.

That's because while it doesn't necessarily put you in the category of being an alcoholic, drinking does put you at a greater risk for alcohol-related disorders than parents who don't drink. Drinking can loosen inhibitions, making you more likely to lose patience with your children and react poorly to their negative behavior.

Heavier-than-normal drinking has its short and long-term health risks, too, like breast cancer, osteoporosis, memory loss and liver damage. Drinking more than five drinks a week can take years off your life, finds a new study published in the Lancet, and is associated with a higher risk of stroke, fatal aneurysm, heart failure and death.

And children feel drinking's negative impact, too. Children of parents who abuse alcohol are more likely to suffer from depression and anxiety disorders as well as academic difficulties.

Just as it takes a village to raise a child, consider that it might take a village to cope with the stresses of raising one. Being a sober mom might not be the easiest thing to do, but it's an attainable goal.

Women should seek out and be able to take advantage of resources, rather than the bottle, to cope with what's driving them to hitch a ride on the very rough waves of the mommy drinking culture. Parents.com has some helpful suggestions, which include going out to a park or play area at local malls to find other like-minded moms, exercising, exploring the option of taking a class or volunteering. Maybe you can be creative and come up with some of your own—your health, and your child, will thank you.