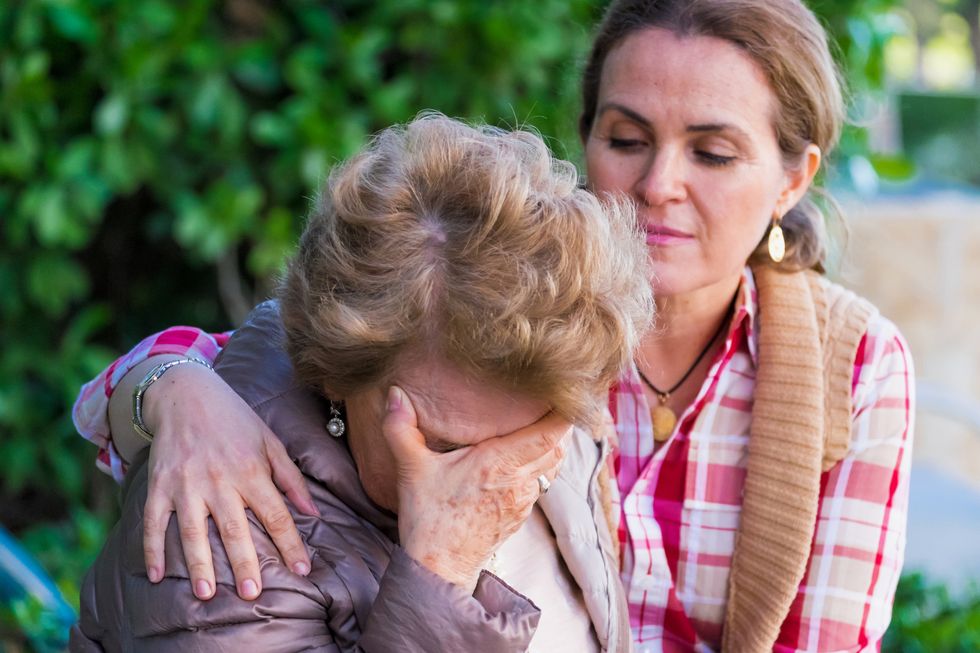 In 2013, Tom Oestreicher was diagnosed with Alzheimer's at the age of 65. And all of their plans were thrown into disarray.

After more than four decades of marriage, the Illinois couple had fashioned a comfortable daily routine. The parents of two grown children, she was a bank teller, while he was a school teacher and a published Civil War scholar.

But in 2013, Tom was diagnosed with Alzheimer's at the age of 65. And all of their plans were thrown into disarray.

"It's certainly not how we saw the end of our journey," admits Marilyn. "My grandma died at 93 with dementia. And my mom has it now at 93. But it's a whole different ballgame when it's your spouse. You just have to go forward and do what you can do."

For Marilyn, that meant coming to terms with her new and often daunting role as the caregiver for a loved one struck by progressive dementia.

She has plenty of company.

"When you look at Alzheimer's statistics, we know that there are now more than 5 million Americans being cared for by 15 million unpaid caregivers," said Monica Moreno, national director of the Alzheimer's Association's division of Early Stage Initiatives and E-Services.

Absent new treatments for a disease with no known cure, those figures will likely triple by the middle of the century, Moreno added.

"Which means that an escalating number of families are going to be facing the challenges of caregiving for a devastating disease," she noted. "So, what we want to do is make sure that we understand exactly what these challenges are, so we can make sure that there are programs and support services in place that can help them through every step of this disease."

To that end, the Alzheimer's Association has just completed a new survey that asked more than 1,500 adults to share their fears and concerns about getting older, getting sick and/or caring for a family member struggling with dementia.

Roughly 70 percent of non-caregivers said they are afraid of ultimately becoming a burden to their spouse, partner or children. A similar number said they feared becoming unable to support and care for themselves.

Among people already caring for someone with Alzheimer's, nine in 10 cited emotional stress as the biggest challenge, while about 80 percent said physical stress and time management were big problems. Nearly 70 percent felt financial strains, and about two-thirds said they felt ill-informed about the disease.

And while eight in 10 caregivers agreed that it ideally "takes a village" to care for someone with Alzheimer's or dementia, more than 80 percent said they had insufficient help from other family members. Almost two-thirds of caregivers said they felt isolated or alone, and roughly half said they had no one with whom to discuss their hardships.

"In fact, some caregivers end up totally losing touch with family or friends, almost out of a fear that they can catch this themselves. Now, we haven't had that happen. But we have very, very good friends," she said.

Marilyn has also found solace in an Alzheimer's support group, a regular caregiver gathering that she describes as a "sisterhood."

"These are people who are dealing with this day to day," she said. "They understand the struggle. I'm not, but some are on meds because of depression, or to help them sleep, or to help them keep going. And that's something you can talk about. You can talk about anything with them, because they're going through the same thing. You get information, and you get support. And that helps you to understand that there is life after a diagnosis."

Instead, he calls his wife his "life-giver," pointing out that it was she who took the first critical steps to get him back on his feet after his diagnosis.

"We were stunned," Mike recalled. "I was a telecommunications technician for Verizon for almost 20 years, which was a pretty demanding job. But when I started to forget things I had trained others to do—when I would start getting lost coming home from work—we went to see a doctor," he said.

"But it was a complete shock to us. We didn't even know you could get it when you're that young. We had no idea what to do. We were clueless," Mike explained. "I had been a very active person. But, to be honest, I went into a deep depression for the first five to six months."

It was his wife who finally reached out to the Alzheimer's Association, beginning the process of "getting educated about the disease," he added.

"So, now we're plugged in," Mike said. "We understand what's going on. And we don't feel like we're trying to do this all on our own. And I'm retired, and I can still function pretty well. But my wife now has all the stress of managing all the finances. And caring for our 19-year-old son, who has Asperger's. And still working a full-time job. And taking care of me. And we're the lucky ones," he chuckled.

'We have our children and friends who pitch in'

Marilyn considers herself lucky as well. With great difficulty, Tom was able to slog through a final year of work, post-diagnosis, to secure his pension. She was able to retire with social security and Medicare in place. "If we had been younger, it would've been a big problem. But we're fortunate," she said.

"Of course, it can still be really tough," she added, noting that hired help is likely not in the offing given that Tom had no long-term disability insurance. That fact places them among an estimated 100 million American workers who have no such coverage, according to Council for Disability Awareness.

"But Tom is still very functional," Marilyn said. "And we have our children and friends who pitch in. So, we don't need help yet. And when we get to the point when we do, we'll just have to see how that works out. You just have to make the best of it."