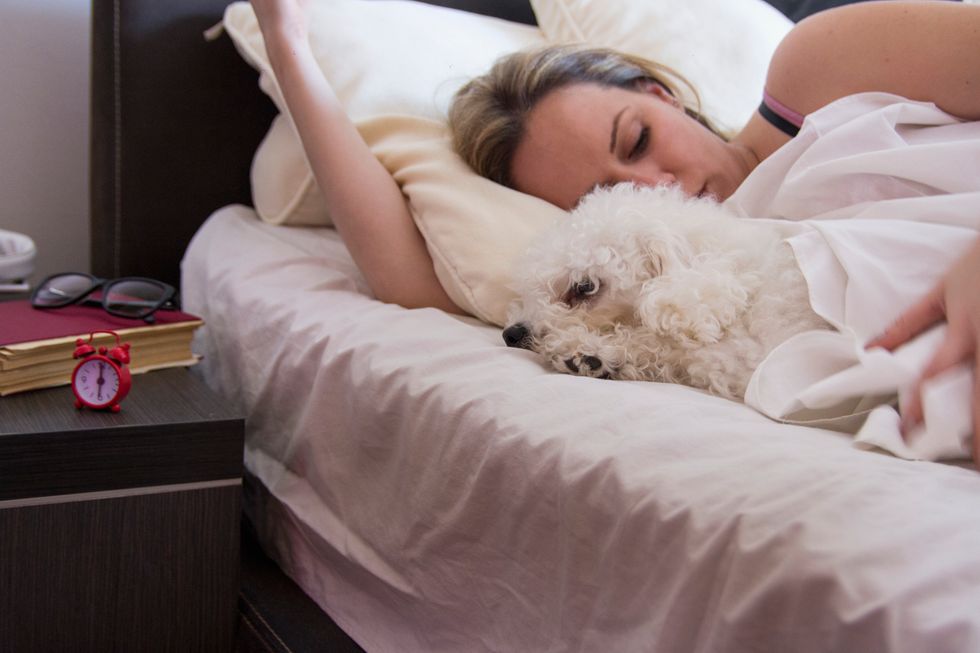 It's time to reclaim your bed and send your pets packing—at least at night.

Your sleep may be more compromised if your dog is in your bed, though this is not the case if Fido is simply in your bedroom, according to a new study from the Mayo Clinic.

"The question is, where do the animals sleep, and does it affect the human?" explained study author Dr. Lois Krahn of the Mayo Clinic in Phoenix.

"I found there are all sorts of different patterns. Most people are pretty loyal and accept their pet. They don't want to complain about their pet bothering them at night. And, my belief is, more people have more than one pet and that just multiplies the possibility for there being a problem," said Krahn, a sleep medicine specialist.

The small study focused on 40 pet owners with a single dog in their bedroom. The researchers evaluated the amount of sleep and wake times over seven days.

Humans wore an activity monitor on their wrist to detect both movement and light. They also kept a sleep diary.

Dogs wore a "FitBark" activity monitor that detected movement only. Pet owners were not given access to their dog's activity data so as to not affect the outcome.

Researchers concluded that a human's sleep efficiency was higher and wakefulness after sleep began was lower when the dog was in the room, but not in the bed.

The quality of the dog's sleep did not change based on its location.

"To me it's like the whole caffeine thing," said Dr. W. Christopher Winter, president of Charlottesville Neurology and Sleep Medicine in Virginia.

"People tell me all the time that they could drink a pot of coffee before they go to bed and it doesn't affect their sleep, but my guess is it does, and they just aren't aware of it. It's making their sleep, which could be 100 percent, 85 percent," he said.

Krahn said: "There are a couple of different things that happen. Very often people are awoken by their pet, so the pet is walking on them, moving around, wiggling in bed, or snoring. Dogs sometimes will be moving and acting out their dreams. There are some pets that get under the blankets, and that wakes a person up."

Winter also pointed out that it isn't just your sleep that should be a concern, it's also your pet's.

"The dog shouldn't become dependent on his owner being in the bed with him. He should develop his own good sleep habits. You could create a situation where when you go out of town, your dog is a nightmare for the person who is watching him because you aren't there to sleep with him or her," Winter said.

"I'm not a big fan of co-sleeping, with children or pets," he said.

The study authors believe this is the first research of its kind to objectively evaluate the effects of dogs in bedrooms on human sleep. Still, they recommend further studies be done evaluating other types of pets and multiple pets per human.

They'd also like to understand if wakefulness by the owner is because of the dog's movements, or if the owner stirred first.

"I also wonder if there are differences in terms of pets. We could study cat, dog and sloth and see what the differences are," Winter said.

The study was published in the September issue of Mayo Clinic Proceedings.

COVID-19 and Social Isolation This Winter: The Perfect Storm