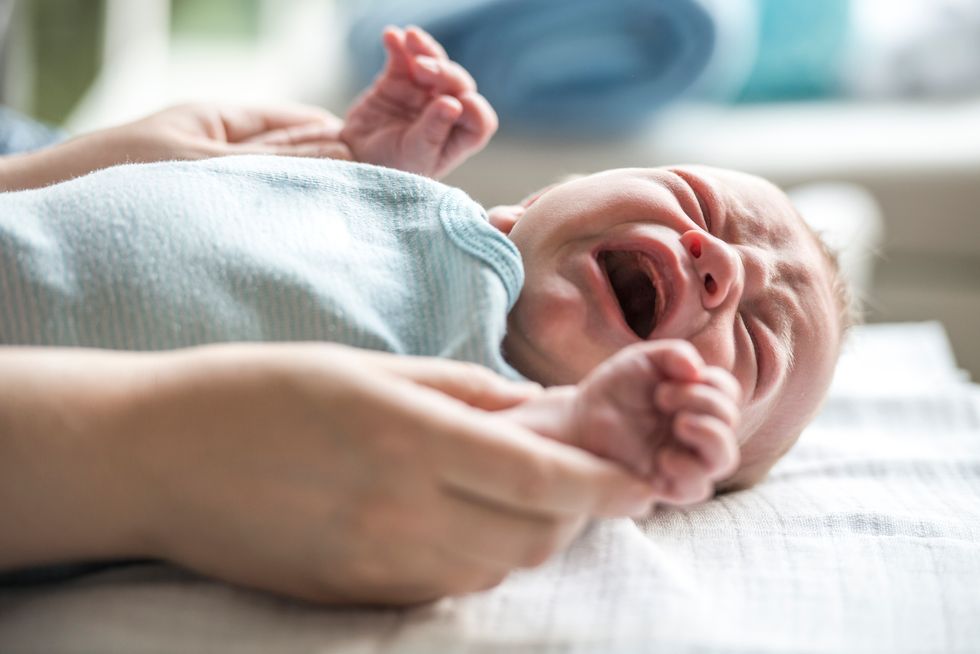 For a Colicky Baby, You Might Give Acupuncture a Try

For a Colicky Baby, You Might Give Acupuncture a Try

For beleaguered parents desperate to soothe a colicky baby, Swedish researchers have a novel suggestion—acupuncture.

After two weeks of treatment, about two-thirds of babies given acupuncture no longer had colic compared to just over a third of infants who didn't have the needle treatment, lead researcher Kajsa Landgren said. She's a lecturer at Lund University in Lund, Sweden.

"Infantile colic is common, and there is no medical treatment, causing desperate parents to seek complementary medicine like acupuncture," she said.

Colic is a catchall term for otherwise healthy babies who cry for more than three hours a day, three or more days a week. The cause of colic is typically unknown. As many as 20 percent of babies may have colic, the researchers said.

No specific treatment or medicine is available. Typical treatment usually consists of comforting the baby by rocking, singing, talking or giving a warm bath.

In Chinese medicine, these pathways are believed to conduct the flow of Qi (pronounced chee)—the human energy force—and acupuncture needles are thought to help clear anything blocking the flow of Qi. In Western medicine, acupuncture is believed to stimulate the central nervous system and release chemicals that dampen pain, according to the U.S. National Center for Complementary and Alternative Medicine.

Because acupuncture is associated with relieving pain, restoring stomach function and calming, the Swedish researchers wanted to see if it might also relieve crying in colicky babies.

"Normal crying can be overestimated by tired and worried parents," Landgren said. "If the baby cries more than three hours a day, a cow's milk-free diet should be tested, as many infants with colic benefit from that."

For those infants who are still crying excessively, minimal acupuncture seems to be a safe and effective treatment, Landgren said.

"Infantile colic heals spontaneously, but causes suffering in the infant and stress in the family while it lasts," Landgren said. "Acupuncture shortens this stressful period."

The report was published online Jan. 16 in the journal Acupuncture in Medicine.

Acupuncture is not usually offered by pediatricians, according to Dr. Alisa Muniz Crim, a pediatric gastroenterologist at Nicklaus Children's Hospital in Miami.

"There is good evidence, however, that acupuncture is safe for infants, and it's something that families can consider," she said.

Parents, however, need to be cautious about where they get treatment, Crim said. She advised parents to be sure the practitioner is experienced in using acupuncture on infants and especially in treating colic. The acupuncturists used for the new study had been in practice for an average of 20 years, according to the study authors.

For the research, Landgren and her colleagues randomly assigned 147 colicky infants between 2 and 8 weeks old to one of three groups of 49 babies each. One group received minimal acupuncture, which consisted of a single needle at one acupuncture point for two to five seconds. A second group was given tailored acupuncture at a maximum of five acupuncture points for up to 30 seconds with mild electric stimulation. The third group had no acupuncture.

To help prevent excessive crying and fussing, all the babies had been off cow's milk for at least five days, according to the researchers.

After treatment, parents kept a detailed diary of how often and how long their child cried.

In all, 144 babies completed the two-week trial. The amount of excessive crying dropped in all groups, which was not unexpected, as colic tends to clear up by itself eventually, the researchers said.

But the reduction in crying was greater among infants who received acupuncture than those who didn't, Landgren said.

Parents continued to chart crying bouts for six days after the final clinic visit, and the differences between the three groups remained, Landgren said.

The infants seemed to tolerate the acupuncture fairly well, the researchers said. Out of 388 treatments, the infants didn't cry at all during 200 of them, and cried for less than a minute during 157 treatments.

Only 31 treatments triggered a crying jag of more than one minute, the researchers reported.