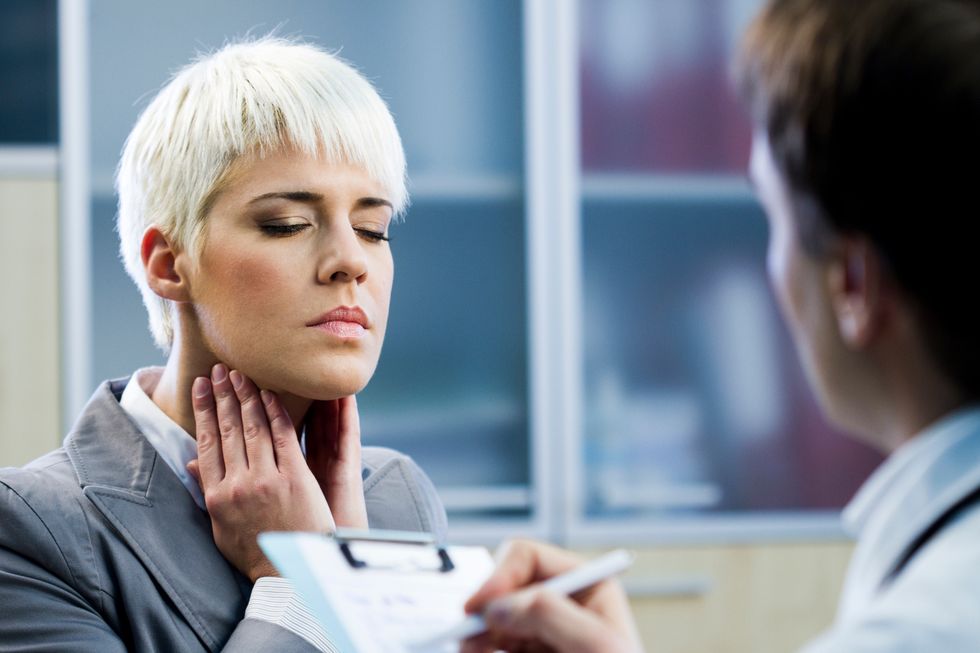 15 Things Your Thyroid Can Affect

The thyroid is a small gland, but it helps coordinate many of your body's activities from metabolism and weight to hair thickness and sweating.

Maybe you've heard people say, "I'm tired because I have a thyroid problem." Or, "I see an endocrinologist because I have thyroid issues." But how much do you really know about your thyroid?

The thyroid is a small gland that is butterfly shaped and located at the base of the neck, just below the Adam's apple. It's part of the endocrine system, which helps coordinate many of your body's activities. The gland makes hormones that regulate your metabolism. But when it's not working right, your body can be affected in various ways.

You don't produce enough hormone.
Hypothyroidism is also known as Hashimoto's disease or Hashimoto's thyroiditis. It is most common in middle-aged women, but Hashimoto's disease can happen at any age. Here, your immune system mistakenly attacks and slowly destroys the thyroid gland and its ability to make hormones. Treatment may include taking daily medication (which you'll likely need for the rest of your life since it restores adequate hormone levels) and monitoring the dosage to ensure you're taking the right amount. Your doctor may pass on medication and take a wait-and-see-approach.

You produce too much hormone.
Hyperthyroidism is also known as Graves' disease. This autoimmune disorder happens when the body's immune system mistakenly attacks the thyroid gland. It's hereditary and is most common in women ages 20 to 30. Some treatments include radioactive iodine therapy (taking radioiodine orally), prescription antithyroid medications (which interfere with the thyroid's use of iodine to produce hormones), beta blockers (which block the effect of hormones on the body) or surgery to remove all or part of your thyroid.

You have a goiter.
A goiter is a noncancerous enlargement of the thyroid gland. It's often caused by a lack of iodine in your diet. It's most common in parts of the world that lack iodine-rich foods and are more common in women and after age 40. Treatments depends on your symptoms, the size of the goiter and the underlying cause. Small goiters that aren't noticeable or problematic typically don't need treatment.

You have a thyroid nodule.
Thyroid nodules are growths that form in or on the thyroid gland. They can be caused by Hashimoto's disease and iodine deficiency, though the causes aren't always known. Most are benign, but a small percentage of cases can be cancerous. They're more common in women, and your risk increases as you get older. Symptoms may resemble hyperthyroidism if you have abnormally high levels of the hormone in your bloodstream. Symptoms will be like hypothyroidism if the nodules are linked to Hashimoto's disease. Treatment depends on the type of thyroid nodule.

Your sleep changes.
You've always been a good sleeper but suddenly can't sleep through the night? You may have an overactive thyroid, which is pumping out some hormones excessively. And that can overstimulate the central nervous system and lead to insomnia. You may also need more sleep than usual, feel tired despite a good night's sleep or have the urge to nap. That means you may have an underactive thyroid.

Your hair is thinning.
Thinning hair, especially on the eyebrows, is a common sign of thyroid disease. An overactive or underactive thyroid affects your hair's growth cycle. Usually, most of your hair grows while some of it rests. But when your thyroid is out of order, too much hair rests at once. And that makes your hair look thinner.

Your skin is dry in the summer.
You may have hypothyroidism. Why? A slower metabolism can decrease sweating. And that means your skin has less moisture, making it dry.

You suddenly feel anxious.
If you start feeling unsettled or anxious and you've never had that issue, you may have a hyperactive thyroid. Because your thyroid hormone levels are high, you feel anxious, nervous, irritable, shaky or jittery.

You have unexplained weight gain.
When you have a lack of hormones due to an underactive thyroid, your metabolism decreases and you burn fewer calories. So, your pants may feel snug, though your exercise or eating habits have remained the same.

Thyroid Awareness: What Happens When This Little Gland Goes Haywire

From Stressing to Bench Pressing: How I Took Control of My Hypothyroidism Diagnosis

Signs There's Something Wrong With Your Thyroid

Is Your Thyroid Making You Gain Weight?