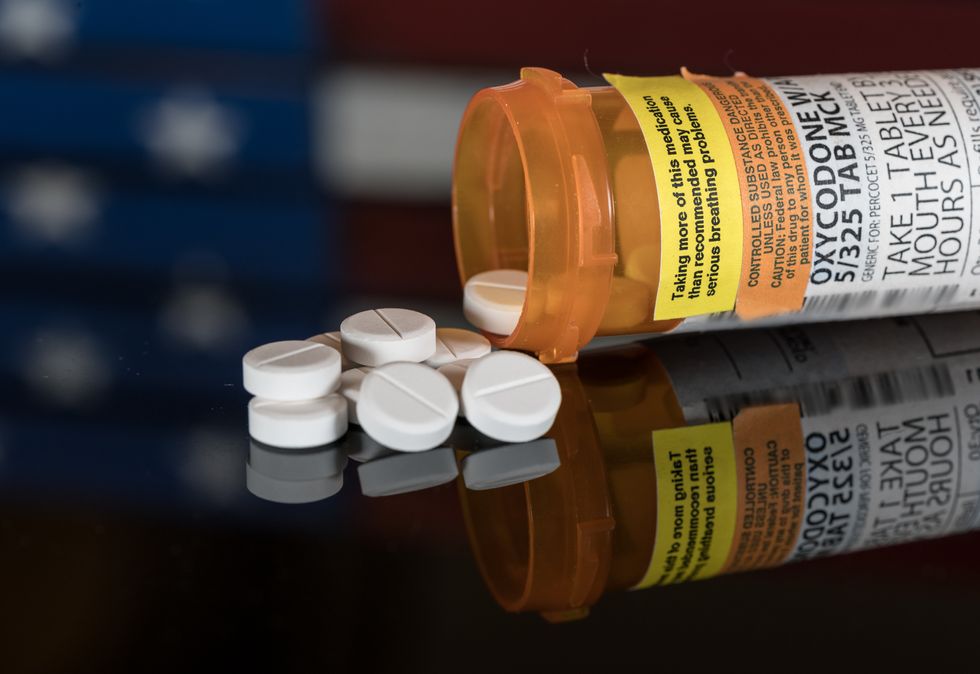 Patients With Chronic Pain Feel Caught In An Opioid-Prescribing Debate

Patients With Chronic Pain Feel Caught In An Opioid-Prescribing Debate

It started with a rolled ankle during a routine Army training exercise. Shannon Hubbard never imagined it was the prologue to one of the most debilitating pain conditions known to exist, called complex regional pain syndrome.

The condition causes the nervous system to go haywire, creating pain disproportionate to the actual injury. It can also affect how the body regulates temperature and blood flow.

For Hubbard, it manifested years ago following surgery on her foot — a common way for it to take hold.

"My leg feels like it's on fire pretty much all the time. It spreads to different parts of your body," the 47-year-old veteran said.

Hubbard props up her leg, careful not to graze it against the kitchen table in her home east of Phoenix. It's red and swollen, still scarred from an ulcer that landed her in the hospital a few months ago.

"That started as a little blister and four days later it was like the size of a baseball," she said. "They had to cut it open and then it got infected, and because I have blood flow issues, it doesn't heal."

She knows it's likely to happen again.

"Over the past three years, I've been prescribed over 60 different medications and combinations; none have even touched the pain," she said.

Hubbard said she's had injections and even traveled across the country for infusions of ketamine, an anesthetic that can be used for pain in extreme cases. Her doctors have discussed amputating her leg because of the frequency of the infections.

"All I can do is manage the pain," she said. "Opioids have become the best solution."

For about nine months, Hubbard was on a combination of short- and long-acting opioids. She said it gave her enough relief to start leaving the house again and do physical therapy.

But in April that changed. At her monthly appointment, her pain doctor informed her the dose was being lowered. "They had to take one of the pills away," she said.

Hubbard knew the rules were part of Arizona's new opioid law, which places restrictions on prescribing and limits the maximum dose for most patients. She also knew the law wasn't supposed to affect her — an existing patient with chronic pain.

Hubbard argued with the doctor, without success. "They didn't indicate there was any medical reason for cutting me back. It was simply because of the pressure of the opioid rules."

Her dose was lowered from 100 morphine milligram equivalents daily (MME) to 90, the highest dose allowed for many new patients in Arizona. She said her pain has been "terrible" ever since.

Hubbard's condition may be extreme, but her situation isn't unique. Faced with skyrocketing drug overdoses, states are cracking down on opioid prescribing. Increasingly, some patients with chronic pain like Hubbard say they are becoming collateral damage.

More than two dozen states have implemented laws or policies limiting opioid prescriptions in some way. The most common is to restrict a patient's first prescription to a number of pills that should last a week or less. But some states like Arizona have gone further by placing a ceiling on the maximum dose for most patients.

The Arizona Opioid Epidemic Act, the culmination of months of outreach and planning by state health officials, was passed earlier this year with unanimous support.

It started in June 2017, when Arizona Gov. Doug Ducey, a Republican, declared a public health emergency, citing new data, showing that two people were dying every day in the state from opioid overdoses.

He has pledged to come after those responsible for the rising death toll.

"All bad actors will be held accountable — whether they are doctors, manufacturers or just plain drug dealers," Ducey said in his annual State of the State address, in January 2018.

The governor cited statistics from one rural county where four doctors prescribed 6 million pills in a single year, concluding "something has gone terribly, terribly wrong."

Later in January, Ducey called a special session of the Arizona legislature and in less than a week he signed the Arizona Opioid Epidemic Act into law. He called it the "most comprehensive and thoughtful package any state has passed to address this issue and crisis to date."

The law expands access to addiction treatment, ramps up oversight of prescribing and protects drug users who call 911 to report an overdose from prosecution, among other things.

Initially, Arizona's major medical associations cautioned against what they saw as too much interference in clinical practice, especially since opioid prescriptions were already on the decline.

Gov. Ducey's administration offered assurances that the law would "maintain access for chronic pain sufferers and others who rely on these drugs." Restrictions would apply only to new patients. Cancer, trauma, end-of-life and other serious cases were exempt. Ultimately, the medical establishment came out in favor of the law.

Since the law's passage, some doctors in Arizona report feeling pressure to lower patient doses, even for patients who have been on stable regimens of opioids for years without trouble.

Dr. Julian Grove knows the nuances of Arizona's new law better than most physicians. A pain doctor, Grove worked with the state on the prescribing rules.

"We moved the needle to a degree so that many patients wouldn't be as severely affected," said Grove, president of the Arizona Pain Society. "But I'll be the first to say this has certainly caused a lot of patients problems [and] anxiety."

"Many people who are prescribing medications have moved to a much more conservative stance and, unfortunately, pain patients are being negatively affected."

Like many states, Arizona has looked to its prescription-monitoring program as a key tool for tracking overprescribing. State law requires prescribers to check the online database. Report cards are sent out comparing each prescriber to the rest of their cohort. Clinicians consider their scores when deciding how to manage patients' care, Grove said.

"A lot of practitioners are reducing opioid medications, not from a clinical perspective, but more from a legal and regulatory perspective for fear of investigation," Grove said. "No practitioner wants to be the highest prescriber."

Arizona's new prescribing rules don't apply to board-certified pain specialists like Grove, who are trained to care for patients with complex chronic pain. But, said Grove, the reality is that doctors — even pain specialists — were already facing pressure on many fronts to curtail opioids — from the Drug Enforcement Agency to health insurers down to state medical boards.

The new state law has only made the reduction of opioids "more fast and furious," he said.

Grove traces the hypervigilance back to guidelines put out by the Centers for Disease Control and Prevention in 2016. The CDC spelled out the risks associated with higher doses of opioids and advised clinicians when starting a patient on opioids to prescribe the lowest effective dosage.

Psychiatrist Sally Satel, a fellow at the American Enterprise Institute, said those guidelines stipulated the decision to lower a patient's dose should be decided on a case-by-case basis, not by means of a blanket policy.

"[The guidelines] have been grossly misinterpreted," Satel said.

The guidelines were not intended for pain specialists, but rather for primary care physicians, a group that accounted for nearly half of all opioids dispensed from 2007 to 2012.

"There is no mandate to reduce doses on people who have been doing well," Satel said.

In the rush to address the nation's opioid overdose crisis, she said, the CDC's guidelines have become the model for many regulators and state legislatures. "It's a very, very unhealthy, deeply chilled environment in which doctors and patients who have chronic pain can no longer work together," she said.

The rate of opioid prescribing nationally has declined in recent years, though it still soars above the levels of the 1990s. Meanwhile, more people are dying from illicit drugs like heroin and fentanyl than prescription opioids.

In Arizona, more than 1,300 people have died from opioid-related overdoses since June 2017, according to preliminary state numbers. Only a third of those deaths involved just a prescription painkiller.

Heroin is now almost as common as oxycodone in overdose cases in Arizona.

A Range Of Views

"For some, it has been a welcome relief," he said. "They feel like it has given them an avenue, a means to confront patients." Some doctors tell him it's an opportunity to have a tough conversation with patients they believe to be at risk for addiction or overdose because of the medication.

The organization is striving to educate its members about Arizona's prescribing rules and the exemptions. But, he said, most doctors now feel the message is clear: "We don't want you prescribing opioids."

Long before the law passed, Wertheim said, physicians were already telling him that they had stopped prescribing, because they "didn't want the liability."

He worries the current climate around prescribing will drive doctors out of pain management, especially in rural areas. There's also a fear that some patients who can't get prescription pills will try stronger street drugs, said Dr. Gerald Harris II, an addiction treatment specialist in Glendale, Ariz.

Harris said he has seen an increase in referrals from doctors concerned that their patients with chronic pain are addicted to opioids. He receives new patients — almost daily, he said — whose doctors have stopped prescribing altogether.

"Their doctor is afraid and he's cut them off," Harris said. "Unfortunately, a great many patients turn to street heroin and other drugs to self-medicate because they couldn't get the medications they need."

Arizona's Department of Health Services is working to reassure providers and dispel the myths, said Dr. Cara Christ, who heads the agency and helped design the state's opioid response. She pointed to the recently launched Opioid Assistance and Referral Line, created to help health care providers with complex cases. The state has also released a set of detailed prescribing guidelines for doctors.

Christ characterizes this as an "adjustment period" while doctors learn the new rules.

"The intent was never to stop prescribers from utilizing opioids," she said. "It's really meant to prevent a future generation from developing opioid use disorder, while not impacting current chronic pain patients."

Christ said she just hasn't heard of many patients losing access to medicine.

It's still too early to gauge the law's success, she said, but opioid prescriptions continue to decline in Arizona.

Arizona saw a 33 percent reduction in the number of opioid prescriptions in April, compared with the same period last year, state data show. Christ's agency reports that more people are getting help for addiction: There has been about a 40 percent increase in hospitals referring patients for behavioral health treatment following an overdose.

Shannon Hubbard, the woman living with complex regional pain syndrome, considers herself fortunate that her doctors didn't cut back her painkiller dose even more.

"I'm actually kind of lucky that I have such a severe case because at least they can't say I'm crazy or it's in my head," she said.

Hubbard is well aware that people are dying every day from opioids. One of her family members struggles with heroin addiction and she's helping raise his daughter. But she's adamant that there's a better way to address the crisis.

"What they are doing is not working. They are having no effect on the guy who is on the street shooting heroin and is really in danger of overdosing." she said. "Instead they are hurting people that are actually helped by the drugs."

This story is part of a partnership that includes KJZZ, NPR and Kaiser Health News.