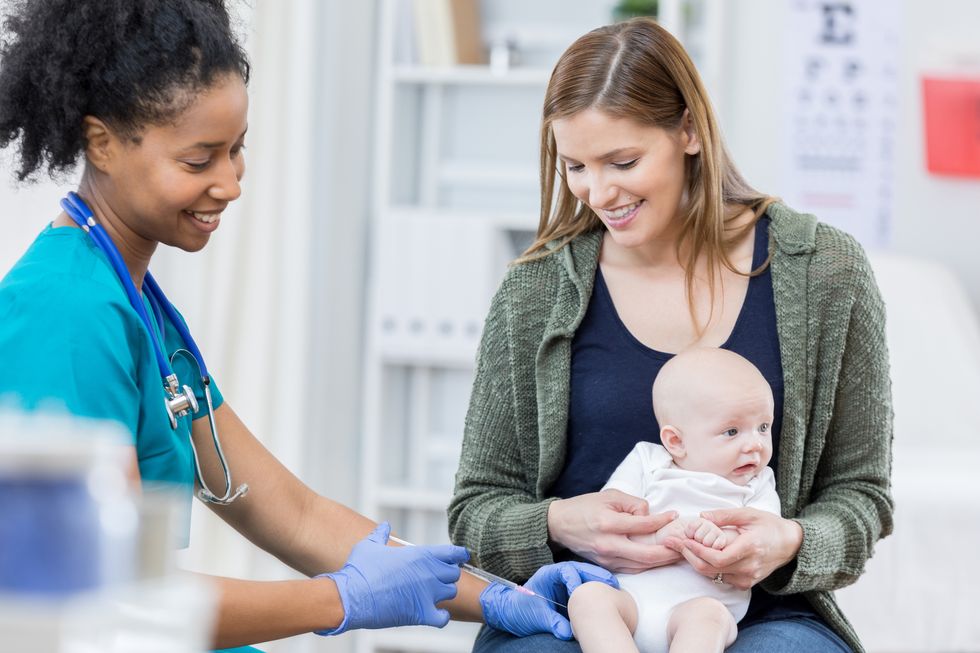 A Parent-To-Parent Campaign To Get Vaccine Rates Up

Parental concern about vaccines continues to prevent kids from getting vaccinated, which puts newborns and others at risk of illness and death. One group in South Carolina is working on peer education.

This article has been archived. We will no longer be updating it. For our most up-to-date information, please visit our vaccine information here.

In 2017, Kim Nelson had just moved her family back to her hometown in South Carolina. Boxes were still scattered around the apartment, and while her two young daughters played, Nelson scrolled through a newspaper article on her phone. It said religious exemptions for vaccines had jumped nearly 70 percent in recent years in the Greenville area — where they had just moved from Florida.

She remembers yelling to her husband in the other room, "David, you have to get in here! I can't believe this."

"It was really eye-opening that this was a big problem," she said.

Nelson's dad is a doctor; she had her immunizations, and so did her kids. But this news scared her. She knew that infants were vulnerable — they couldn't get started on most vaccines until they were 2 months old. And some kids and adults have diseases that compromise their immune systems, which means they can't get vaccines and rely on herd immunity. Nelson was already thinking about public health a lot back then, and was even considering a career switch, from banking to public health. She decided she had to do something.

"I very much believe if you have the ability to advocate then you have to," she said. "The onus is on us if we want change."

Like a lot of moms, Nelson had spent hours online. She knew how easy it was to fall down internet rabbit holes, into a world of fake studies and scary stories.

"As somebody who just cannot stand wrong things being on the internet," Nelson said, "if I saw something with vaccines, I was very quick to chime in 'That's not true' or 'No, that's not how that works.' … I usually got banned."

Nelson started her own group, South Carolina Parents for Vaccines. She began posting scientific articles online. She started responding to private messages from concerned parents with specific questions. She also found positive reinforcement was important and would roam around the mom groups, sprinkling affirmations.

Nelson, 33, was inspired by peer-focused groups around the country doing similar work. Groups with national reach like Voices for Vaccines, and regional groups like Vax Northwest in Washington, take a similar approach, encouraging parents to get educated and share facts about vaccines with other parents.

Nationally, 91 percent of children under 3 years old are vaccinated for measles. But in some communities the rate is much lower. In Clark County, Wash., where a measles outbreak is up to 62 cases, about 76 percent of kindergartners come to school without all their vaccines. Public health specialists, concerned about weakened herd immunity, are increasingly raising the alarm about the need to improve vaccination rates.

But efforts to reach vaccine-hesitant parents often fail. And some parents remain entrenched in a decision not to vaccinate even when presented with the facts.

Pediatricians could play a role — and many do — but they're not compensated to have lengthy discussions with parents, and some of them find it a frustrating task. That's left a huge opening for alternative approaches. Nelson thought it would be best to zero in on moms who were still on the fence about vaccines.

"It's easier to pull a hesitant parent over than it is somebody who is firmly anti-vax," Nelson said. She explained that parents who oppose vaccination often feel so strongly about it that they won't engage in a discussion. "They feel validated by that choice — it's part of community, it's part of their identity."

The most important thing is timing: People may need information about vaccines before they become parents. A first pregnancy — when men and women start transitioning into their parental roles — is often when the issue first crops up. Nelson points to one survey study from the Centers for Disease Control and Prevention that showed 90 percent of expectant women have made up their minds on vaccines by the time they are six months pregnant.

"They're not going to a pediatrician [yet]," Nelson said. "Their OB-GYN is probably not speaking to the pediatric vaccine schedule. … So where are they going? They're going online."

Nelson tries to counter bad information online with facts. But she also understands the value of in-person dialogue. She organized a class at a public library and advertised the event on mom forums. Nelson was nervous that people hostile to vaccines might show up.

"Are they here to rip me a new one? Or are they here to learn about vaccines?" Nelson wondered. "I just decided, if they're here, I'm going to give them good information."

Amy Morris was pregnant, but she drove an hour and a half to attend the class. Morris wasn't the typical first-time mom Nelson was trying to reach. She already had three kids. But during this pregnancy, she was getting increasingly nervous about vaccines. She had recently had a miscarriage, and it was right around the time she got a flu shot. Morris had been reading pro- and anti-vaccine posts in the mom forums, and was starting to have some doubts. In Nelson's class, she learned the risks of not vaccinating.

"That spoke to me more than anything," said Morris.

Now, holding her healthy 8-month-old son, Thorin, on her lap, she said she's glad she went, because she was feeling vulnerable.

"I always knew it was the right thing to do," Morris said. "I was listening to that fear monster in the back of my head."

Nelson said that fear is what the anti-vaccine community feeds on. She's learned to ask questions to help parents get at the root of their anxiety.

"I do think they appreciate it when you meet them sympathetically and you don't just try and blast facts down their throat," Nelson said.

Nelson is now trying to get local hospitals to integrate that vaccine talk into their birthing classes. She's studying for a master's degree in public health at the University of South Carolina, and also works with the Bradshaw Institute for Community Child Health and Advocacy. She's even considering a run for public office.

This story is part of a partnership that includes WFAE, NPR and Kaiser Health News.

10 Vaccines Adults Should Get

What’s the Connection Between Chickenpox and Shingles?

A Mother’s Journey to Getting Her Children Vaccinated