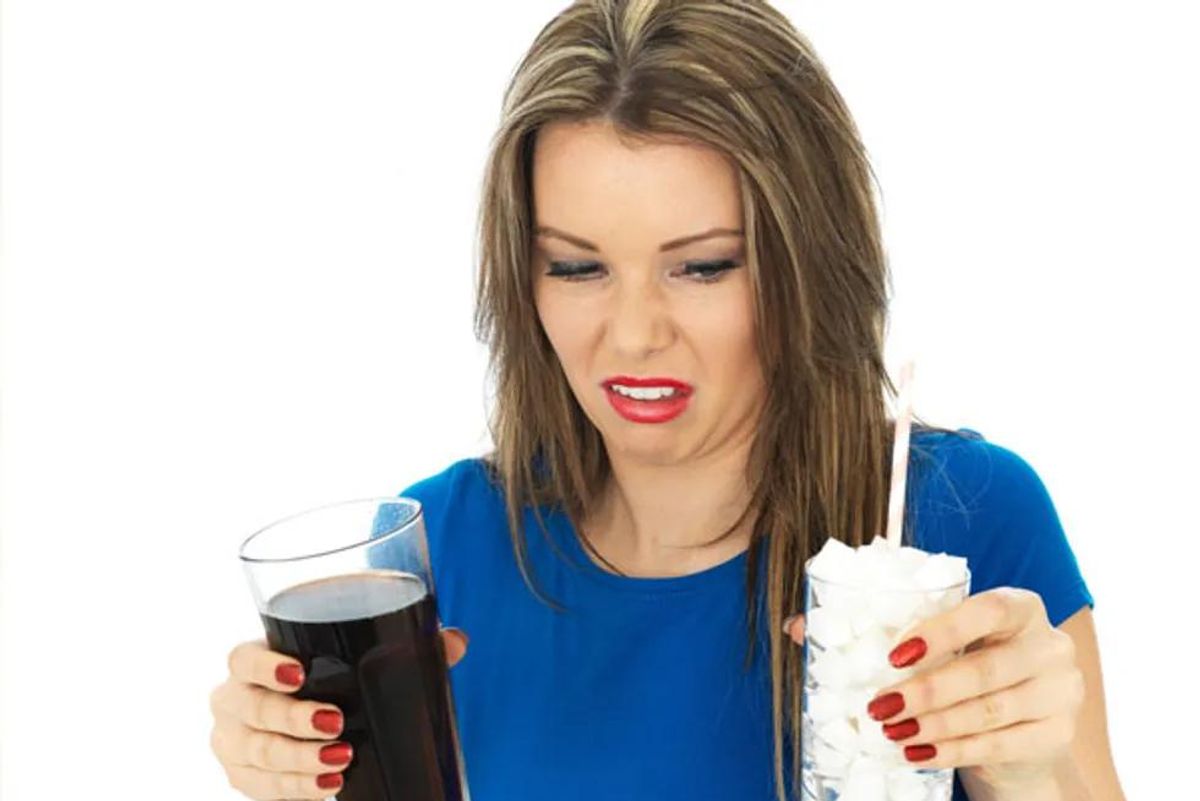 Research shows that drinking sugary drinks increases your risk for type 2 diabetes, regardless of your weight.

THURSDAY, April 30, 2015 (HealthDay News) -- People who love sugary sodas and flavored milk may have a heightened risk of type 2 diabetes, regardless of their body weight, a large new study finds.

The good news, the researchers said, is that swapping just one of those drinks each day -- for water or unsweetened coffee or tea -- could lower diabetes risk by up to 25 percent.

The findings, reported online April 30 in the journal Diabetologia, add to a large body of evidence linking sugary drinks and type 2 diabetes. Type 2 is the most common form of diabetes and often affects people who are obese.

But a number of studies, including this latest one, have found that heavier body weight does not completely explain the connection between sugary drinks and diabetes risk.

This study can't answer the question of why, said lead researcher Dr. Nita Forouhi, of the University of Cambridge, in the United Kingdom. But other research has offered some theories, she added.

Insulin is a hormone that controls blood sugar levels. Over time, spikes in blood sugar and insulin can cause people to lose their sensitivity to the hormone -- and that insulin resistance is the precursor to type 2 diabetes.

These new findings cannot prove that a daily soft drink directly causes diabetes, Forouhi said. But coupled with existing research, they make a strong case for cause-and-effect, she added.

"Our findings provide strong support to the recent guidance from the World Health Organization to limit the consumption of free sugars in our diet," Forouhi said. "Limiting the intake of sweetened beverages provides an easy way to achieve such a goal."

The findings are based on detailed food diaries from over 25,000 middle-aged and older British adults, who were diabetes-free when they entered the study. Over the next decade, 847 were diagnosed with the disease.

Overall, the study found, the more sugary soda or sweetened milk that people consumed, the higher their risk of developing diabetes. For every extra daily serving, the risk of diabetes rose by about 22 percent.

Of course, people who love sweet drinks might have other habits that raise the odds of diabetes. But, Forouhi said, her team accounted for many of those factors -- including body weight, exercise habits and people's education levels.

The good news, according to Forouhi, is that the study also pointed to a simple solution: The researchers estimate that replacing just one sugary drink every day, with water or unsweetened coffee or tea, could lower people's diabetes risk by 14 percent to 25 percent.

To Toby Smithson, a dietitian who specializes in meal planning to control or prevent diabetes, the message is straightforward: "This is a reminder to be careful about the calories you drink," she said.

For the typical adult, one cup of chocolate milk provides about 9 percent of calorie needs for the day, according to Smithson, who is also a spokesperson for the Academy of Nutrition and Dietetics.

Milk does offer protein, calcium and other nutrients, but the added sugar in sweetened milk adds up to empty calories, Smithson pointed out.

A 12-ounce sugar-sweetened soda, meanwhile, is all empty calories -- and adds up to about 7 percent of a person's daily calorie needs, Smithson said.

Responding to the study, the American Beverage Association (ABA) objected to pointing the finger at sweetened drinks.

"Leading health organizations -- including the Academy of Nutrition and Dietetics and the Mayo Clinic -- agree that the known risk factors for type 2 diabetes include being overweight or obese, race or ethnicity, increasing age, lack of physical activity and family history of diabetes, not beverage consumption," the ABA said in a statement.

But both Forouhi and Smithson said that replacing sugary drinks with water or unsweetened tea or coffee is a simple step people can take to cut sugar from their diets.

If you find water too bland, Smithson suggested adding a slice of lemon, lime or orange. Another trick she often recommends: Put a cinnamon stick in boiling water, to make a sweet-tasting tea without sugar.