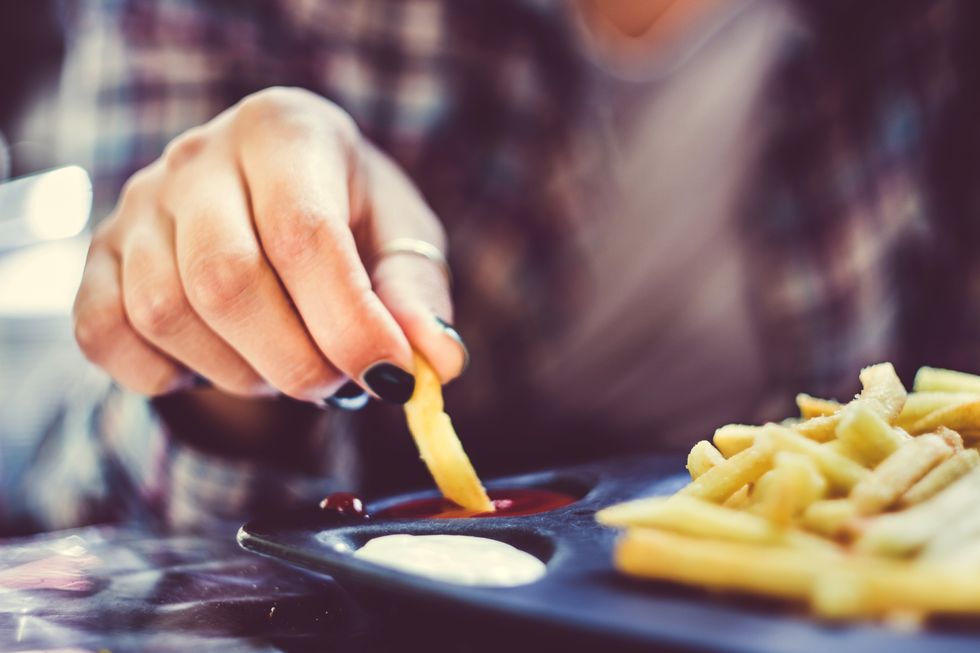 Too Much Fried Food May Shorten Your Life

Fried chicken, french fries and chicken-fried steak might be delicious, but treating yourself to such fare regularly could be deadly.

WEDNESDAY, Jan. 23, 2019 (HealthDay News) -- Fried chicken, french fries and chicken-fried steak might be delicious, but treating yourself to such fare regularly could be deadly, a new study warns.

Women who eat more than one serving a week of fried chicken or fried fish have an increased risk of heart disease and death, researchers report.

"Overall, we found that total fried food consumption is related to higher risk of all-cause death, and also death from cardiovascular disease," said senior researcher Dr. Wei Bao. He's an assistant professor of epidemiology with the University of Iowa's College of Public Health.

The results are not surprising "given the association of fried food to weight gain and obesity, as well as elevation of cholesterol and triglycerides," said Dr. Guy Mintz, who was not part of the study. He directs cardiovascular health and lipidology at Northwell Health's Sandra Atlas Bass Heart Hospital in Manhasset, N.Y.

"Poor decisions lead to poor outcomes. We have the opportunity to help ourselves live healthier and longer with lifestyle changes," Mintz said. "It is time we own what we eat and realize our dietary choices have consequences."

For the study, Bao and his colleagues relied on data from the Women's Health Initiative, a long-running federally funded study focused on heart disease, cancer and other health problems in postmenopausal women.

Nearly 107,000 women between ages 50 and 79 were quizzed on their diets and other health problems. These women enrolled in the study between 1993 and 1998, and researchers followed them up to February 2017.

The researchers found that women who ate a lot of fried foods also had other problems that could affect their heart health, Mintz said.

One-third of participants who ate one or more fried meals per week were obese, as were 44 percent of the patients who consumed more than one fried food meal per day, Mintz noted.

"More than half of these patients achieved less than the recommended 150 minutes of exercise per week," Mintz continued. About 40 percent of the patients were former smokers.

But even after researchers controlled for these risk factors, fried foods were independently associated with an increased risk of death:

The researchers found no evidence linking fried food to an increased risk of cancer death, and the study did not prove a cause-and-effect link between fried foods and early death.

The findings were published Jan. 23 in the BMJ.

Even though the study focused on women, Bao said it's very likely that men would be similarly affected by a diet heavy in fried foods.

Obesity probably plays a part in the increased risk of death, he said. Women who ate fried food regularly had a much larger daily calorie intake than those who didn't eat fried food.

But other factors could play a role as well, Bao said.

People in Spain often eat fried foods, but a previous study found that fried foods were not associated with an increased risk of death in that country, he noted.

Spanish fried food lovers regularly use olive oil for their frying, and more often they cook their fried foods in their own kitchens, Bao explained. By comparison, people in the United States tend to eat fried foods from restaurants, where they are often cooked in deep fryers using peanut or canola oils.

In the meantime, people shouldn't downplay the affect high fat intake has on heart health, said Dr. Satjit Bhusri, a cardiologist with Lenox Hill Hospital in New York City. He was not part of the study.

"This study emphasizes that there is no 'maybe' -- fried food and fat have a direct relation to heart disease," he said.