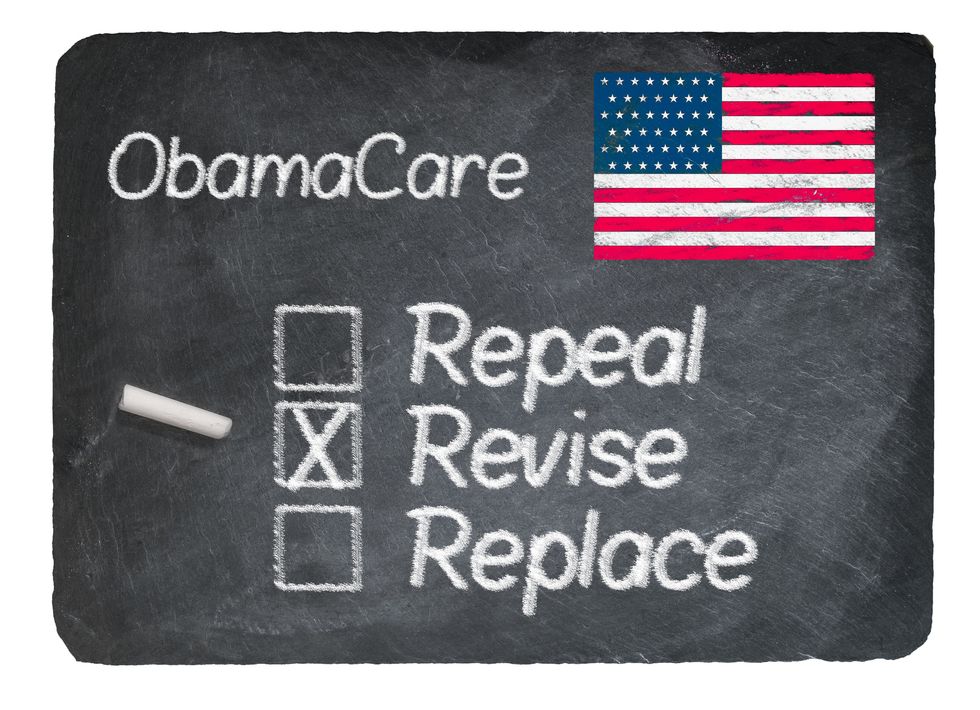 In a dramatic overnight showdown, the U.S. Senate early Friday morning rejected by one vote a highly contentious "skinny" repeal bill that would have gutted key elements of the Affordable Care Act.

The move may have ended the Republican Party's seven-year quest to dismantle the controversial health care reform law, sometimes called Obamacare, which was signed into law by President Barack Obama in 2010.

The GOP's last-ditch effort to push through a stripped-down version of repeal fell by a 49-51 vote.

Sen. John McCain, the Arizona Republican who returned to the Senate this week after blood-clot surgery and a diagnosis of brain cancer, split with his party to sink the measure.

Many senators announced their votes in booming voices, The New York Times reported. McCain quietly registered his vote with a thumbs-down signal. He later offered an explanation on Twitter: "Skinny repeal fell short because it fell short of our promise to repeal & replace Obamacare w/ meaningful reform."

Political commentators early Friday observed that McCain's impassioned speech on the Senate floor earlier this week may have foreshadowed his intentions. The 80-year-old war hero and six-term senator chided his colleagues for rushing through legislation outside of "regular order," involving hearings and bipartisan debate.

Republicans Lisa Murkowski of Alaska and Susan Collins of Maine, who did not even support beginning Senate floor debate of any Obamacare repeal bill, also voted no.

Conceding defeat, Majority Leader Mitch McConnell of Kentucky told his colleagues in a speech on the Senate floor that it's time to "move on."

McConnell put the health bill on hold and said the Senate would move on to other legislation next week, the Associated Press reported.

Speaking for the minority, Sen. Chuck Schumer (D-NY) called on the Senate to work together in a bipartisan way to improve the Affordable Care Act, which is struggling under assorted financial pressures.

The Senate bill's collapse breaks one of President Donald Trump's signature campaign promises. Following the vote, Trump tweeted: "3 Republicans and 48 Democrats let the American people down. As I said from the beginning, let ObamaCare implode, then deal. Watch!"

With no legislative fix in sight, the Obamacare marketplaces remain mired in uncertainty at a time when health insurers are considering their participation for 2018.

The American Medical Association (AMA), like many health organizations and patient advocacy groups, maintained that the Senate bill would have harmed patients. Some estimates said approximately 16 million Americans would lose insurance coverage.

"The first priority should be to stabilize the individual marketplace to achieve the goal of providing access to quality affordable health coverage for more Americans," he said in a statement.

Hours ahead of the anticipated vote, a group of powerful GOP senators demanded some assurance that the bill would serve only as a vehicle for House-Senate negotiations in a conference committee.

South Carolina's Sen. Lindsey Graham cited increasing concern that the House of Representatives would vote on whatever the Senate passed and send it directly to Trump's desk. In May, the House passed a bill that called for eliminating key components of Obamacare.

"The skinny bill as policy is a disaster; the skinny bill as a replacement for Obamacare is a fraud," said Graham. He was joined by senators McCain, Wisconsin's Ron Johnson and Louisiana's Bill Cassidy at a news conference Wednesday evening.

At a minimum, the so-called skinny bill would have rolled back Obamacare's individual and employer mandates. However, it would have preserved Medicaid and premium subsidies for low- and middle-income Americans who buy Obamacare health plans.

The skinny bill was largely intended to serve as a vehicle for negotiations between the Senate and the House on a more complete law to overhaul Obamacare.

With no text of the skinny bill made publicly available, full details remained under wraps until just hours before Friday morning's Senate vote.

Fifty votes were needed to pass the slimmed-down GOP measure, but even that proved to be a heavy lift.

Friday morning's defeat followed a week of failed attempts by GOP leadership to move a repeal bill forward. The Senate on Wednesday was unable to pass a measure to repeal portions of the health law without a replacement. A separate repeal-and-replacement bill was voted down on Tuesday.

"Look, we can't make the same mistake we made in 2009," McCain said, referring to the passage of Obamacare without GOP support or a thorough reading of the bill. "We've got to have some bipartisanship," he said.

On Thursday, the health insurance lobby said it opposed eliminating the individual mandate, which is the part of the law requiring Americans to maintain health insurance coverage or pay a fine. It's designed to get younger, healthy people to sign up for coverage to offset the cost of treating older, sicker Americans.

Eliminating key elements of the law without offering new solutions to stabilize the individual market "will result in higher premiums, fewer choices for consumers, and fewer people covered next year," Marilyn Tavenner said in a statement. She is president and CEO of America's Health Insurance Plans and former head of the U.S. Centers for Medicare and Medicaid services under the Obama administration.

Tavenner called for immediate action to shore up the Obamacare marketplace, including continued funding to reduce consumers' out-of-pocket medical costs.

Citing prior published estimates and rough estimates by the Congressional Budget Office, Senate Democrats assailed the GOP's attempt to take down the individual mandate. Doing so would boost premiums by 20 percent and leave 15 million to 16 million Americans without coverage, they said.