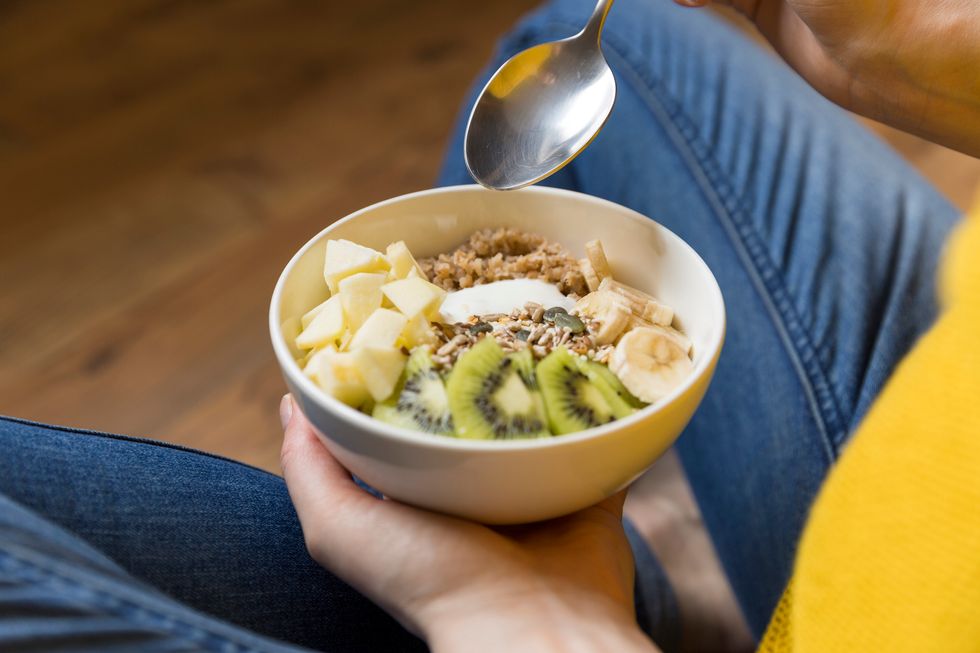 Want a healthier heart? Get at least a fifth of your daily calories from your breakfast and stop watching so much TV.

WEDNESDAY, March 6, 2019 (HealthDay News) -- Want a healthier heart? Get at least a fifth of your daily calories from your breakfast and stop watching so much TV.

Those are the conclusions of two studies to be presented next week at the annual meeting of the American College of Cardiology (ACC).

Both studies were based on data on the living habits of 2,000 middle-aged and older Greeks who also underwent tests to check the condition of their arteries.

Those who ate energy-rich breakfasts -- consuming at least a fifth of their daily calories at the breakfast table -- had significantly less buildup of fatty plaque and stiffness in their arteries, compared to people who had a less caloric breakfast or skipped breakfast altogether, said a team led by Dr. Sotirios Tsalamandris. He's a cardiologist at the First Cardiology Clinic at National and Kapodistrian University of Athens.

When it came to television viewing, people who said they watched more than 21 hours of TV a week were nearly twice as likely to have serious plaque buildup in their arteries, the study found, compared to those who watched TV for seven hours or less a week.

The studies couldn't prove cause and effect. Nevertheless, "our results emphasize the importance of avoiding prolonged periods of sedentary behavior," Tsalamandris said in an ACC news release.

"These findings suggest a clear message to hit the 'off' button on your TV and abandon your sofa," Tsalamandris said in an ACC news release. "Even activities of low energy expenditure, such as socializing with friends or housekeeping activities, may have a substantial benefit to your health compared to time spent sitting and watching TV."

Indeed, numerous studies have suggested that just the simple act of sitting for long periods is detrimental to health, even for people who regularly exercise.

The study also shows that a "high-energy breakfast should be part of a healthy lifestyle," Tsalamandris said. "Eating a breakfast constituting more than 20 percent of the total daily caloric intake may be of equal or even greater importance than a person's specific dietary pattern, such as whether they follow the Mediterranean diet, a low-fat diet or other dietary pattern."

Heart experts in the United States agreed that staying active and eating right are key to heart health.

"This study has a very powerful public health warning, and reinforces the need for all people of all ages, not just patients, to move and avoid prolonged periods of inactivity," said Dr. Guy Mintz, who directs cardiovascular health at Northwell Health's Sandra Atlas Bass Heart Hospital in Manhasset, N.Y.

He believes that society's increasing fixation on screens -- TV, computers, smartphones -- is keeping children and adults from living healthy lives. "The more sedentary a person is the greater risk for high blood pressure, diabetes, obesity and high cholesterol," Mintz said. More should be done to boost levels of activity at school and in the workplace, he believes.

As for the findings on breakfast, cardiologist Dr. Marcin Kowalski said they made intuitive sense.

"Patients who eat breakfast in the morning are also likely to select other healthy choices," he reasoned. "Healthy eating and exercise have been shown to decrease stress, which is correlated with a lower risk of cardiovascular disease." Kowalski directs cardiac electrophysiology at Staten Island University Hospital in New York City.

But Mintz wasn't convinced by the breakfast findings.

"The authors conclude that the correlation between a high energy breakfast and heart health is unknown," he noted. "I feel that more research needs to be developed before a definitive conclusion can be drawn on this correlation. I have many patients who eat a modest breakfast or no breakfast and still have very healthy lifestyles with low cardiovascular risk."

Because these findings were presented at a medical meeting, they should be considered preliminary until published in a peer-reviewed journal.