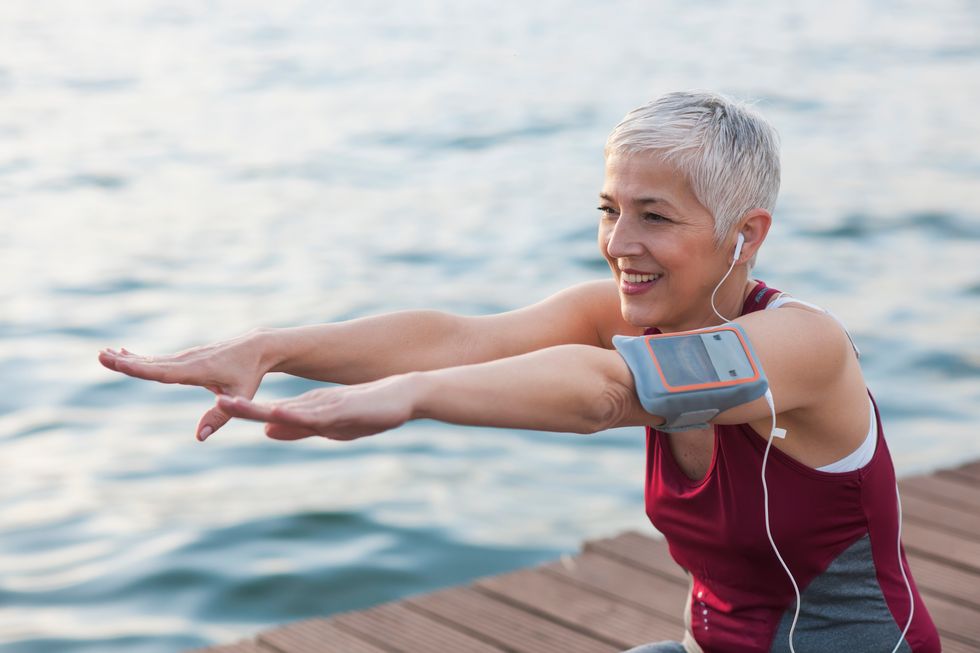 Postmenopausal? Give Exercise a Try

Researchers found that a 20-week exercise program helped women boost their fitness levels, lose a little weight and give higher ratings to their physical and mental well-being.

That included a reduction in hot flashes and night sweats—two of the most bothersome symptoms of menopause.

Researchers led by Debora Godoy-Izquierdo, of the University of Grenada in Spain, reported the findings online Feb. 15 in the journal Menopause.

The study offers good news to women who want alternatives to hormones for managing menopause symptoms, according to Dr. JoAnn Pinkerton, executive director of the North American Menopause Society.

Hot flashes and night sweats are the most common reasons that women seek treatment for menopause symptoms, said Pinkerton, who was not involved in the study.

For some, she said, the problems are severe enough to warrant hormone therapy. But most women can find relief in other ways.

"Exercise, stress reduction and adequate sleep are very important for women who are becoming menopausal," Pinkerton said. "For a majority of women, lifestyle changes may be enough to get the hot flashes to be less bothersome, as well as help prevent the weight gain and mood changes common during this time."

For the new study, the researchers recruited 234 women who were at least one year past menopause. Overall, 166 women were sedentary, and half of them were assigned to stick with their usual lifestyle, while the other half started the 20-week exercise program.

The rest of the women were already physically active, and they served as a second comparison group.

The exercise program consisted of three one-hour workouts per week. Each session was supervised and involved moderate aerobic exercise, like fast walking, along with strength training.

The women in this program also received psychological counseling, aimed at helping them with "self-regulation" and behavior changes.

After 20 weeks, the study found, women in the exercise program had lost a small amount of weight, on average. But the bigger changes were seen in their fitness levels, blood pressure and "health-related quality of life."

In general, the women gave higher ratings to their physical and mental health, and said they were less bothered by hot flashes and other menopause symptoms.

Those benefits were still apparent at the one-year mark. At that point, the researchers said, the women looked more like the group that had been active all along, rather than those who'd remained sedentary.

There was one exception: After initially losing a little weight, women in the program typically went back to their starting weight.

But regardless of weight, improvements in fitness levels are critical, according to Dr. Chip Lavie, medical director of cardiac rehabilitation and prevention at the John Ochsner Heart and Vascular Institute in New Orleans.

"Improving fitness is one of the most important things that any person, including a postmenopausal woman, can do to reduce their mortality and mortality from cardiovascular disease," said Lavie, who was not involved in the study.

In this study, the women's fitness levels were gauged by, among other things, their resting heart rate and how fast they could walk 1 kilometer.

Those measures reflect how well the heart and blood vessels are working. But, Lavie said, studies have tied fitness to other health benefits, too—including improvements in stress and depression symptoms.

"And only small improvements in fitness are needed to induce these benefits," Lavie said.

As for why exercise might help with hot flashes, Pinkerton pointed to a couple reasons.

Exercise, she said, is thought to boost levels of certain brain chemicals, such as dopamine and serotonin—which are important for mood, sleep and other functions. And those chemicals are sometimes lower during the hormonal fluctuations that come with menopause.

And one study, Pinkerton said, found that women who exercised were better able to "regulate their body heat."

The program in this study did involve psychological and behavioral counseling—which may also have helped the women manage their menopause symptoms, according to Pinkerton.

But that does not necessarily mean women need such a comprehensive program.

Other research, Pinkerton said, has found that simpler exercise routines can help women manage hot flashes. It took only 30 minutes of any aerobic exercise—like walking, jogging, bicycling or swimming—three or more times per week, she noted.