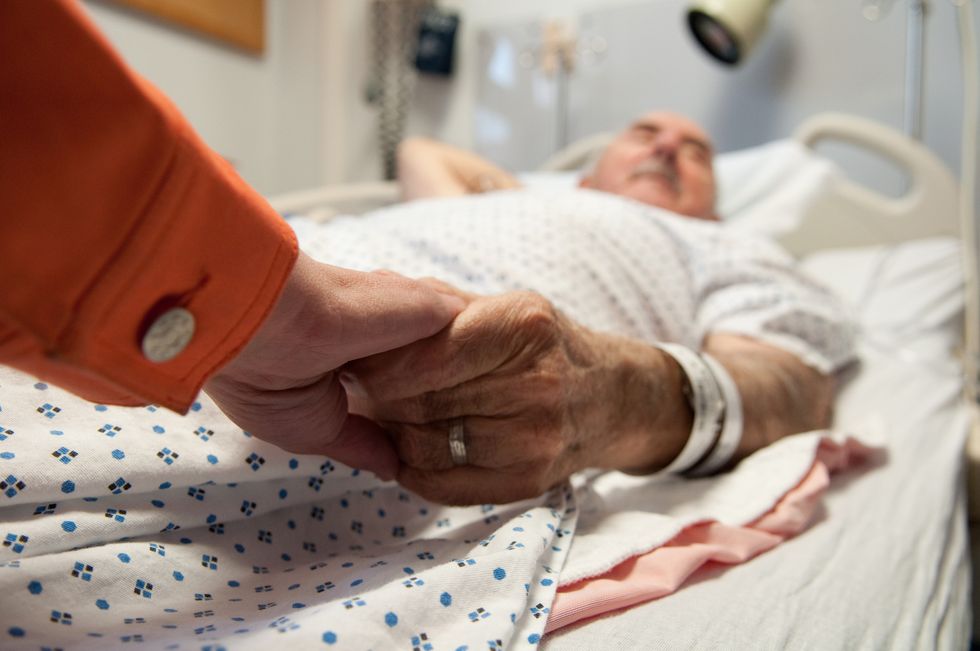 'No One Dies Alone' Program

Millions of older Americans live out their final hours alone in a hospital bed.

But at some hospitals, a comforting presence at a patient's bedside is considered essential end-of-life medicine. So, if there are no friends or loved ones to keep vigil, a volunteer might fill the void.

"It's amazing how much just having someone hold a hand makes a difference," said Rebecca Hixson, a registered nurse at Vanderbilt Hospital Medical Center in Nashville.

Americans are living longer, with more seniors living alone—and dying alone. They may be single, childless, or getting treatment long distances away from their loved ones.

A trauma patient who was flown to the Vanderbilt medical center is a case in point.

"His family lived two states away. Once they left, they didn't have the money for gas to come back," said Hixson, clinical staff leader in the hospital's palliative care department.

"The last thing he said to his wife was, 'I just don't want to die alone,' " she recalled.

When he was told the hospital had someone who could sit with him, "he seemed to be very comforted by that," Hixson said. "Just knowing there would be a human presence calmed him down."

And the American Psychological Association estimates that more than three-quarters of Americans will die either in a hospital bed or a long-term care facility, rather than at home.

All of this means many more older adults find themselves without "someone there to advocate for them, or simply be with them in the hospital, when the time comes," said Dr. Mohana Karlekar, director of palliative care at Vanderbilt.

The point of palliative care is to provide relief from the stress of serious illness, and improve quality of life for patients and families.

Vanderbilt launched its vigil volunteers program in 2016. It was modeled after a program begun 15 years earlier at Sacred Heart Medical Center in Eugene, Ore.

The Oregon program—titled No One Dies Alone—has gained a hold in various hospice and hospital settings across the country.

The idea is to carefully screen and train volunteers who can befriend these solitary patients as they enter their waning hours.

Because Vanderbilt is a Level 1 trauma center, "we see the sickest of the sick," Hixson said. "People are often flown in from rural areas, from places where their family members—if they have family members—have no way to get to them once they come to us. Their support system just isn't there."

The program's goal, she said, "is not only to show respect, but really to help make someone's final moments as meaningful as possible."

The Vanderbilt pilot program started off small, with 25 volunteers attending to roughly 15 patients in its first six months. Soon it will expand from palliative care to the medical intensive care unit, Hixson said.

One of the program's committed hand-holders is Todd Havens, of Nolensville, Tenn.

Havens has a background in service as a volunteer fireman and first-aid instructor. He's also vice president of the medical center's office of internal audit.

"I work here, and I know I'm supporting an organization whose mission is to care for our community," he said.

His first vigil was last September. The patient was "an elderly woman whose only relative was a brother who was suffering from dementia," Havens said. "He wasn't able to even care for himself. And she was well into her 80s, so she literally had nobody."

Havens said he engages with patients—whether they're communicative or not—by playing soothing music or reading books or prayers.

"It's the right thing to do to give them some sort of peace, during such a critical moment in their lives," he said.

Karlekar said it's important to have a formal system in place.

"We can try and cope by flying by the seat of our pants in some non-systematic fashion," she explained. "Or we can step up and do what needs to be done in an organized but humane way."