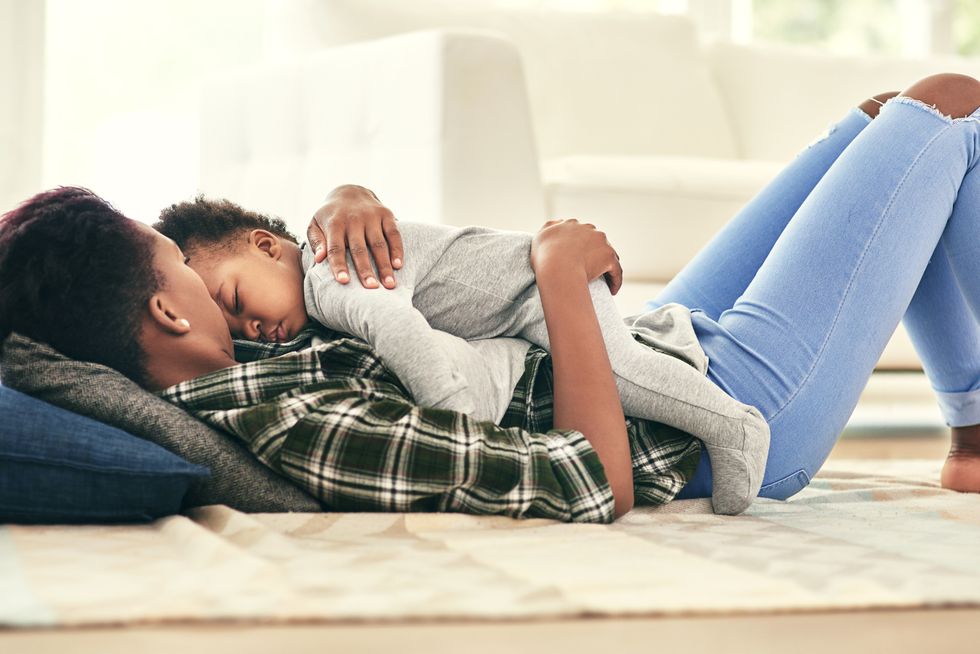 Kids Mean Less Shuteye for Mom, While Dad Slumbers On

This will come as no surprise to mothers, but a new survey finds that women with children living at home are more likely to be sleep-deprived than women without children.

SUNDAY, Feb. 26, 2017 (HealthDay News)—This will come as no surprise to mothers, but a new survey finds that women with children living at home are more likely to be sleep-deprived than women without children.

However, the presence of children in the home did nothing to alter men's sleep patterns.

The researchers also found that women with children reported feeling tired more days a month than their child-free counterparts.

"Forty-eight percent of women with children reported at least seven hours of sleep, compared to 62 percent of women without children," said study leader Kelly Sullivan. She's an assistant professor of epidemiology at the Jiann-Ping Hsu College of Public Health at Georgia Southern University.

Women with young children at home said they were tired 14 days a month, compared to 11 days for those without children in the home, the findings showed.

Among the nearly 3,000 women who were 45 or younger, the only factor linked with insufficient sleep was having kids in the house.

"Each child in the house increased the odds of insufficient sleep by 50 percent," Sullivan said.

"For men, we did basically the same analysis and children had absolutely no impact on men [and their sleep]," she added.

Sullivan's team looked at other factors—including exercise, marital status and education—but found none of them were linked to how long the women under age 45 slept each night.

Among men 45 and younger, having less than a high school education was tied to greater odds of being sleep-deprived. Among women, not working and having a higher household income were linked with getting more sleep, the researchers said.

Another sleep specialist urged caution in looking at the findings.

Even before having children, "men in general may be getting less sleep than women," said Jodi Mindell, associate director of the Sleep Center at Children's Hospital of Philadelphia.

In her research, Mindell has found that mothers with children who are newborn to age 3 typically get less sleep than mothers of children ages 3 to 6.

Mindell suggests parents make a plan as to who is going to take care of household duties, including child care, so each parent can have a goal of enough sleep.

"It doesn't have to be 50-50, but it's sharing it," she said. If one parent works outside the home during the week and the other doesn't, the stay-at-home parent can cover night-time child duty while the other parent takes over on weekends, she suggested.

Or, one may take night-time responsibility and the other morning duties, if that suits schedules better, Mindell said.

Sullivan said such schedules need to be individualized. And that can only happen when a person takes into account why she or he isn't sleeping, and makes a plan to overcome that.

The study findings are scheduled for presentation in April at the American Academy of Neurology's annual meeting in Boston. Research presented at meetings is considered preliminary until published in a peer-reviewed journal.