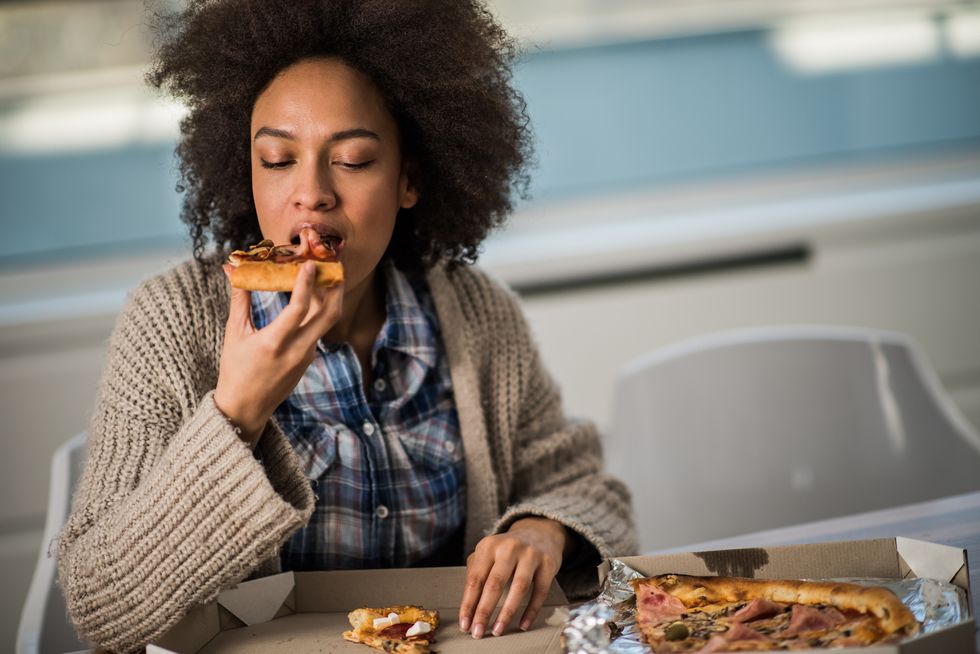 How Would You Do in the Pizza Challenge?

For some people who struggle with weight gain, their body's responses to delicious food may be working against them.

TUESDAY, May 22, 2018 (HealthDay News) -- For some people who struggle with weight gain, their body's responses to delicious food may be working against them.

In a new study, obese people who had trouble keeping weight loss at bay salivated more and had a steeper increase in their heart rate when presented with a tempting pizza, compared to folks without such struggles.

"Our findings reveal a marked difference in physiological reactivity to food depending on weight-loss history," said a European team of researchers led by Leonie Balter, from the University of Birmingham School of Psychology in England.

One U.S. expert said there are strategies to work around these responses, however.

"In order to lose weight, patients need to learn to control that response to food and find other outlets to generate those happy hormones, such as exercise or social interaction," Barrett said.

In the study, Balter and colleagues analyzed the saliva production and heart rate of a group of people exposed to a tempting pizza. The participants averaged just under 30 years of age and were divided into three different groups based on their weight.

Twenty of the participants used to be obese but had kept the weight off, 25 were currently obese and 20 were thin people that had never been overweight.

The researchers found that the people who were obese produced more saliva and had a greater heart rate response after being presented with a pizza. Those who had successfully lost weight, on the other hand, had a reduced response.

Meanwhile, the group of people who had never been obese had no physiological response to the pizza.

The participants were also asked to complete a computerized thinking task designed to assess their motivation to win and avoid losing both food and money. The formerly obese people who had successfully lost weight and kept it off were less affected by food "wins" and more affected by their food "losses."

According to the researchers, that suggests that "food rewards" eventually lessen in value for successful dieters, compared to people who still struggle with weight gain.

Of course, this observational study can't prove cause and effect. But Balter's team believes the findings could lead to improved weight-loss maintenance strategies.

Dina Hirsch is a health psychologist at the Center for Weight Management at Syosset Hospital in Syosset, N.Y. She explained that physiology often works against people trying to lose weight.

"There are physiological factors that favor weight regain in overweight individuals who have lost weight," Hirsch said. "For example, as people lose weight, their body reacts to defend their weight 'set point,' by increasing appetite and appetite-stimulating hormones."

Add that to a modern environment where people drive instead of walk, and where cheap, high-calorie foods are seemingly everywhere, and you have a recipe for weight regain, Hirsch said.

Still, despite all that, "some people are able to persist and succeed at maintaining weight loss," she said.

How do they succeed? According to Hirsch, "the National Weight Control Registry found that those who successfully kept weight off engaged in frequent self-monitoring of food and calorie intake, planned their meals in advance and weighed themselves regularly."

She said the temptation to eat sugary or greasy foods is always there, but successful weight management depends on finding healthier alternatives and sticking to them.

Barrett agreed. "Part of the response to food is certainly physiologic," she said. "But I think a significant part also comes from the patient's ability to control their emotions surrounding food and to set themselves up for success by avoiding places where they know they will overeat or make bad food choices."

The study's findings were expected to be presented on Tuesday at the annual meeting of the European Congress on Obesity, in Vienna, Austria. Findings presented at medical meetings are typically considered preliminary until published in a peer-reviewed journal.