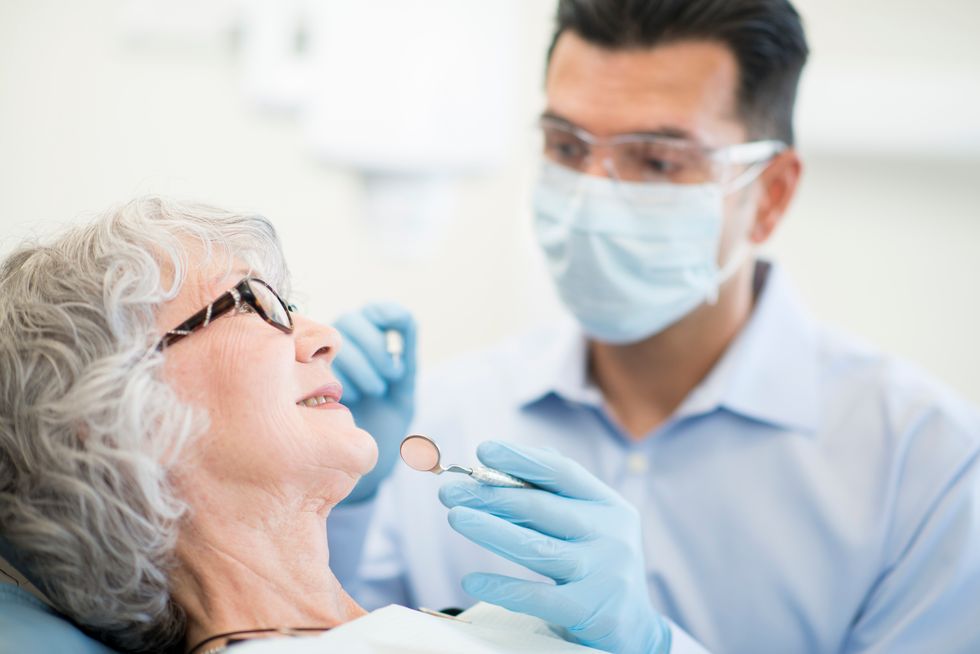 Gum Disease May Be Linked to Cancer Risk in Older Women

A new study links gum disease with an increased risk of several types of cancer in postmenopausal women, even in women who never smoked.

So-called periodontal disease was tied to a 14 percent higher risk of developing any type of cancer, the investigators found. But the greatest risk was for esophageal cancer, which was more than three times more likely in older women who had gum disease than those who didn't.

In addition, gum disease was associated with a higher risk of lung cancer, gallbladder cancer, melanoma and breast cancer, the findings showed.

"These findings may provide a new target to test an intervention for cancer prevention—oral hygiene and periodontal disease treatment and prevention," said lead researcher Jean Wactawski-Wende. She is dean of the School of Public Health and Health Professions at the State University of New York at Buffalo.

Breast cancer, lung cancer and gallbladder cancer were linked with higher risk among women who smoked and had gum disease.

For those women who never smoked but had gum disease, other cancers, such as melanoma, were associated with higher risk, the researchers said.

Although gum disease has been associated with heart disease, the exact reason it may be tied to an increased risk of cancer isn't known, Wactawski-Wende said.

She speculated that gum disease could be a marker for overall health.

"However, there is real potential for local and systemic inflammation resulting from the bacteria in the oral cavity reaching other sites through ingestion or inhalation, as well as bacteria entering the bloodstream through oral tissues," Wactawski-Wende said.

Because this study doesn't prove a direct cause-and-effect relationship, a study designed to look specifically at poor oral hygiene and the association with cancer could help define what might link the two, experts said.

For the study, the investigators collected data on nearly 66,000 women, aged 54 to 86, who took part in the Women's Health Initiative Observational Study.

The women reported gum disease on questionnaires given between 1999 and 2003. The researchers monitored the cancer outcomes through September 2013.

Over an average follow-up of eight years, the researchers identified nearly 7,200 cases of cancer.

One limitation of the study is that the women self-reported their gum disease, according to dental and cancer experts.

Dr. Ronald Burakoff, chair of dental medicine at North Shore University Hospital in Manhasset, N.Y., was not involved with the study but was familiar with the findings.

"There may be a connection between gum disease and cancer, but we really can't tell how strong it is because the gum disease is self-reported," Burakoff said.

More research is needed to really define the connection, he added. "If you eliminate periodontal disease, however, it may reduce your risk of having cancer," Burakoff suggested.

People should be on the lookout for the telltale signs of gum disease, namely loose teeth and bleeding gums when you brush, he advised.

According to Dr. Stephanie Bernik, chief of surgical oncology at Lenox Hill Hospital in New York City, "The findings in this study certainly point to a need to further investigate the association between periodontal disease and cancer."

The link may not be direct, but could simply be that those with poor oral hygiene are less likely to take care of themselves in other ways, she noted.

"Perhaps those with poor oral hygiene have poor diets, are overweight, lack exercise or drink in excess, all of which have been shown to increase the risk of cancer," Bernik said.

The report was published Aug. 1 in the journal Cancer Epidemiology, Biomarkers & Prevention.

The Truth About Oil Pulling