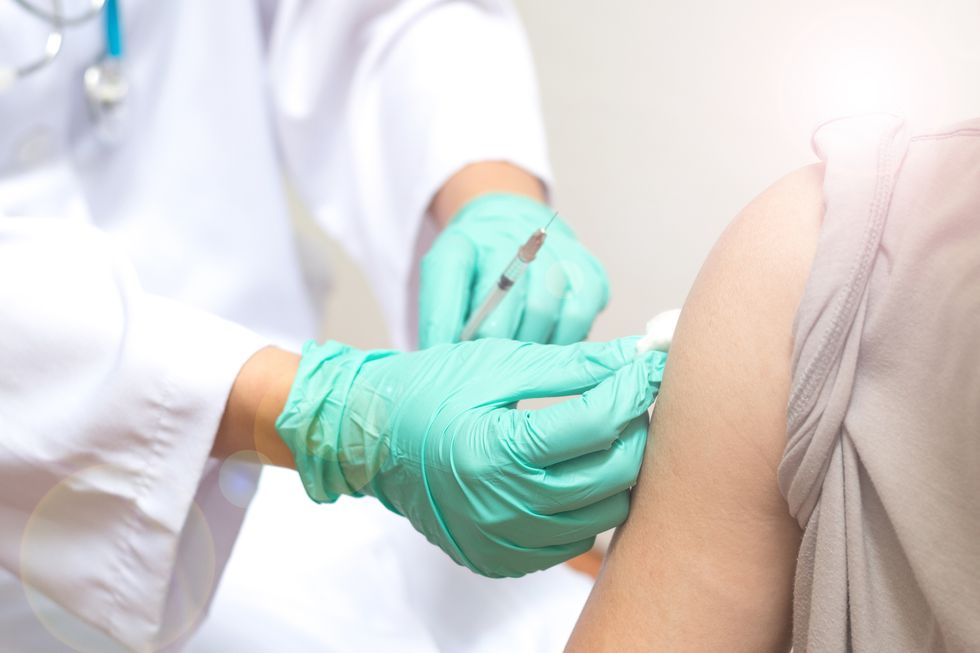 What you need to know about the measles epidemic.

So Ivanhoe, 60, sought out her long-time primary care doctor, who performed an antibody test to see whether she had any protection against measles.

To her surprise, the test revealed that Ivanhoe had no immunity to measles. Her doctor quickly gave her a measles booster shot.

"I'm a New Yorker. I'm out and about. I take the subway every day," Ivanhoe said of her concerns. "One of the outbreak areas is in Williamsburg, Brooklyn. I have friends in Williamsburg. I go to there to visit, for dinner. It all becomes local."

Ivanhoe is one of a growing number of adults who are worried that their immunity against measles might have lapsed, if they even received a vaccination.

The U.S. Centers for Disease Control and Prevention has downplayed these concerns, saying that only adults in high-risk groups should talk with their doctor about a measles vaccination.

But experts are divided on whether the CDC is underestimating the threat posed by possibly waning immunity in adults.

There's good reason adults are worried. At least 764 cases of measles across 23 states have been reported so far this year, the CDC says. Most cases have occurred in unvaccinated groups living in communities located on either side of the nation, in the areas surrounding New York City and Portland, Ore.

The high-risk groups of adults who should discuss measles vaccination with their doctor include international travelers, health care workers, and folks living in communities that are in the throes of an outbreak, Dr. Nancy Messonnier, director of the CDC's National Center for Immunization and Respiratory Diseases, said in a media briefing last week.

"Most adults are protected against measles. That's what the science says," Messonnier said. "That includes people who were born before measles vaccine was recommended, and even folks who only got a single dose."

Ivanhoe's physician, Dr. Len Horovitz, said her antibody test "clearly proves that is not the case."

Horovitz recommends his adult patients get a blood test that shows the level of antibodies they have against measles and other infectious diseases.

"By the time you reach your [childhood] pediatrician it'll be weeks, if he's still even alive and hasn't retired or moved," said Horovitz, an internist with Lenox Hill Hospital in New York City. "It's impossible to get vaccination records for my patients. They're tearing their hair out."

But, Horovitz noted, "In a 24-hour turn-around time, I can offer them a blood test and have an answer."

Besides people at high risk due to their circumstances, there's only one group of adults that really should talk with their doctor about getting the measles shot, the CDC says.

One of the first measles vaccines used a killed version of virus, and was administered between 1963 and 1967. That vaccine did not provide lasting immunity, and for decades the CDC has urged that generation of folks to undergo vaccination with the better live version of the measles vaccine.

"If you happen to be someone 50 years ago that got this killed measles vaccine, then you'd have to get re-vaccinated with the live virus vaccine," said Dr. Sandra Fryhofer, an internal medicine specialist in Atlanta.

People born in the United States earlier than 1957 are presumed to be immune to measles because the virus is so contagious everyone caught measles in those days.

Pediatric infectious disease specialist Dr. Matthew Zahn says the CDC is right that most adults are protected against measles.

"Our experience overwhelmingly has been that it becomes a numbers game," said Zahn, who is on staff at the Children's Hospital Orange County in Orange, Calif. "The vaccine seems to be about 99% effective in keeping you from getting sick, but if you have hundreds and hundreds of people who are exposed, then you will see occasional cases of persons who've been vaccinated previously who are getting sick anyway."

Best use of resources

Zahn figures people who are worried about the status of their measles immunity should just go ahead and get the vaccine, rather than go through an antibody test.

"If you're not sure you've had your two doses before and you want to be up to date, there's nothing wrong with getting that additional dose," Zahn said, noting that a person who undergoes the antibody test pays extra and faces getting stuck with a needle twice.

There's plenty of measles vaccine on hand so there's no concern about shortages, Zahn said. Doctors are simply trying to focus their attention on the most critical weaknesses in America's immune protection, and waning adult immunity doesn't seem to be contributing to the ongoing outbreaks.

"It's more of an issue where you want to best use everybody's time and resources," Zahn said. "We certainly are seeing outbreaks, but those outbreaks are so weighted towards unvaccinated persons, that's where the community is by far at risk."